All Things Zombie or ATZ for short.


I’d played a few 'after the apocalypse' zombie games using the free Chain reaction rule set and added in my version of zombie rules, mainly picked up from reading Bryan’s (Vampifan) blog and his game reports. In the end to support 2 Hour Wargames I bought the rules and realized I had a few things wrong but hell no one’s perfect not even Ed the guy who wrote the rules but I’ve not told him that yet.

If you read my opening post you will realize that I owe Bryan a big debt of gratitude in bringing me back to wargaming and to be honest he’s also the reason it’s been so long since my last post. Anyway I may come back to that but for now lets just say that I was extremely impressed that he played a long running ATZ campaign, spanning lot’s of games over the course of quite a few months. I can’t remember the time span but I do know that somewhere on my laptop I have every game saved, they were that interesting.

I’ve never really been a campaign man, I don’t have the long term commitment to one genre or indeed one story line, but in the end I decided I would give it a go and created my character Seaman Harris. ATZ has quite a good campaign system built into the rule set and I’d read a few stories on different blogs following this system and they all went reasonably well. Some were more successful than others and they all had a different tone but were also quite long lasting campaigns so in spite of my misgivings about my commitment to the idea as a whole I thought I should at least try. So this is the story of the opening of my campaign to survive in a zombie infested world.

Perhaps before I start I should explain that I have no interest in zombies, I’ve never seen a zombie film or read a book about them. I was persuaded that they were the ideal opponent for a solo wargamer by reading Bryan’s and others game reports. Your opponent only has one objective it seemed – to eat your brains, hot, cold, sautéed, grilled, pan fried, it didn’t seem to matter, they just had to eat them, and of course you had to stop them, which was tricky at times. 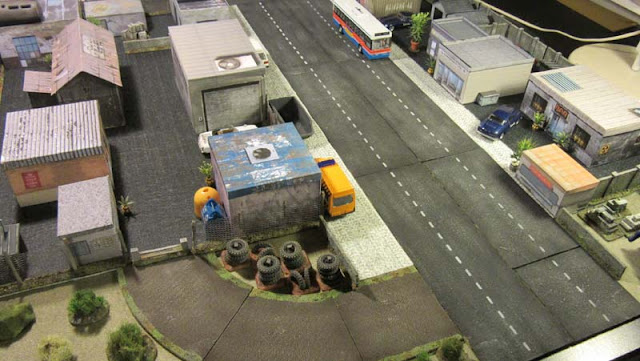 This is downtown Zombie Ville, I didn’t have a name for the place, commitment, don’t mention that word. 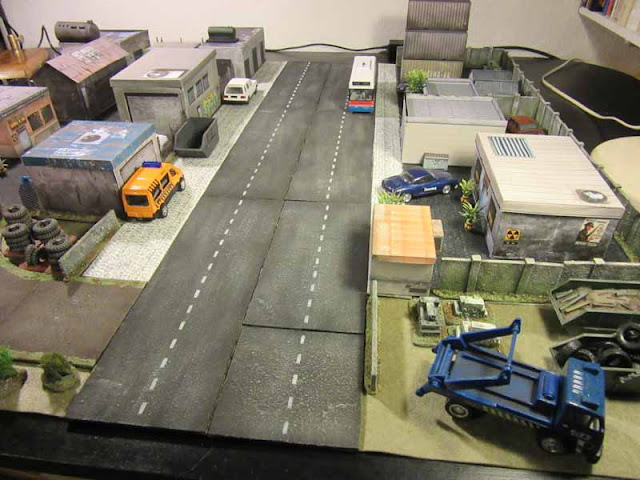 The Hero – You on the first day of the Campaign has to achieve a number of tasks before going home, although getting home is one of the tasks. These are all quite simple such as getting cash from the ATM, food or beer in my case from the off licence etc etc. 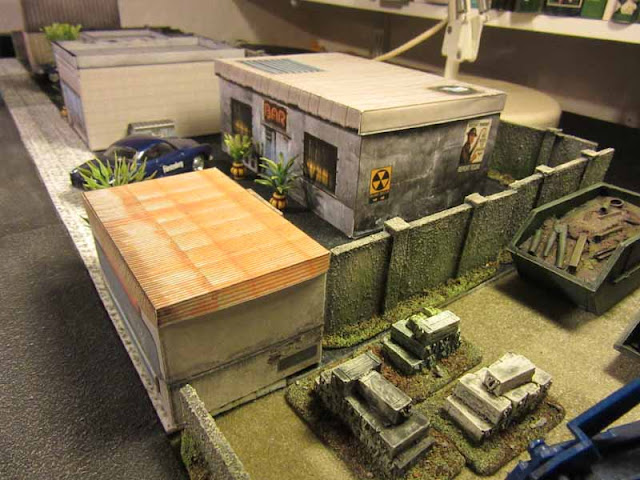 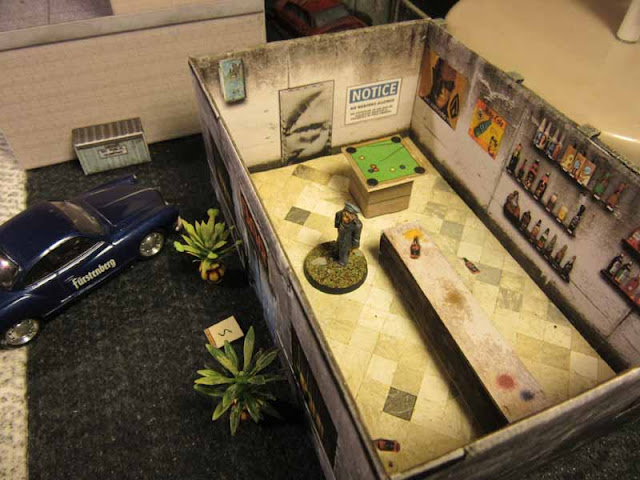 Not a very good picture but that’s me, Seaman Harris, I am well equipped for this sort of adventure when the world is collapsing, I has a knife and had picked up a catapult, this is England and we don’t have useful things like guns laying around and available for such an eventuality as a zombie rising.

Looking in the bar I might have been better off picking up a pool cue but regrets are for losers so they say. 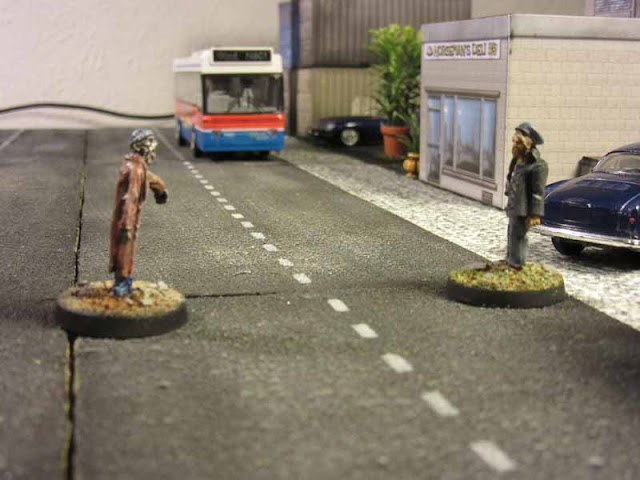 I exited the bar into the street going about the tasks that had been generated and encountered a zombie, why I’m stood in the road when there’s a bus coming straight at me I’ve no idea but I was new to this sort of game setting, so best not to question too closely. 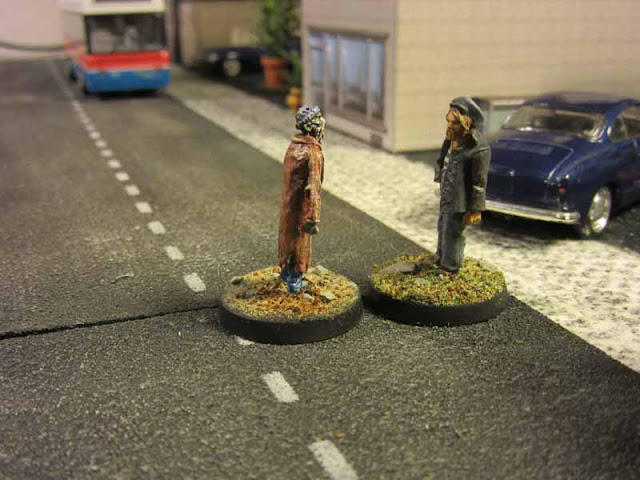 Anyway the zombie approached me and I had to do a test to see if I recognised it was a danger, bearing in mind what I said earlier about not knowing anything about zombie culture well neither did Seaman Harris and so when the Zombie attacked and tried to tear his/my throat out I/him was completely unprepared and so had not drawn the knife and had to fight bare handed.

This is not as bad as it seemed because even then the advantage was with me, however having the advantage and making the most of the advantage are two very different things and the zombie killed me and ate my brains which explains quite a lot.

So that was my entry into a zombie campaign and I haven’t tried its delights since.

I always intended to post this short game sometime, but of course there was always so much else to do, the reason I should have posted it, was because I knew it would make Bryan smile and I guess because I haven’t heard from him since his last dramatic post I don’t suppose I ever will hear from him and I won’t be able to make him smile, which makes me rather sad.

I shall miss you mate, all the best where ever you are.
Posted by Vagabond at 23:01 14 comments: