Memories of an Old French Sea Dog - Duty and Daring

This is a scenario from the Sails of Glory site, one that they used in a campaign run back in 2015.

These tales are told by that old French Sea Dog Jean le Vagabond to anyone drinking in Martine’s Bar in central Provence some time in the 1830’s. His usual audience is Baptiste and Baptiste’s handsome Daughter Hermione, but in general includes anyone who will listen and then fill up his glass with the proverbial 98 Brandy, or indeed anything alcoholic.

I have stolen my style from Arthur Conan-Doyle’s Memories of Brigadier Gerrard a Light Cavalryman in the Napoleons Wars, it is a great read if you like tongue in the cheek humour.

We had been working on the old Orient night and day since the battle but we still hadn't managed to rig a working sail or jury rig a rudder that would work and help us overcome the wind and tide that was carrying us towards the coast. I could clearly see the breakers crashing on the strand and knew that without some assistance we would end our days on that desolate beach.

I know Baptiste that the tales I have told you in this snug bar in central  have been mainly of fame and glory but the one I want to recount tonight shows another side of sailing and warfare at sea, the one that no one really talks about. It is the despair when you realise that no matter how hard you fight the elements, they will always be stronger than you.

I was just a young Aspirant then, I’d only been in the Navy three months and was still wet behind the ears but I fondly remember the time the 3rd Lieutenant sent me to the Carpenter for a Long Stand, it was 90 minutes before I understood the joke but I have not been deceived like that since then.

We had fought a long and hard battle against Johnny Rostbif, and as you would expect the Orient and I had acquitted ourselves well. She was old and I was young, only 14 years, yes Hermione I was only 14 years old when I went to sea, and I can say with a clear conscience that although there were younger men in the service there were none as brave and bold as Jean le Vagabond.

You gasp in wonder but I can see in your face you are a young woman of great intellect and I can’t pull the wool over your eyes, so you know I speak the truth when I say all around me men despaired and it was up to me, a 14 year old boy to maintain the ships morale.

I was the first to see her, my eyes were strong and sharp then and I saw Courageous before any of my compatriots and shouted out “we are rescued, we are rescued” They all looked aft to see a glorious sight, a Concorde Class Frigate under full sail chasing and catching us as fast as ever you like. 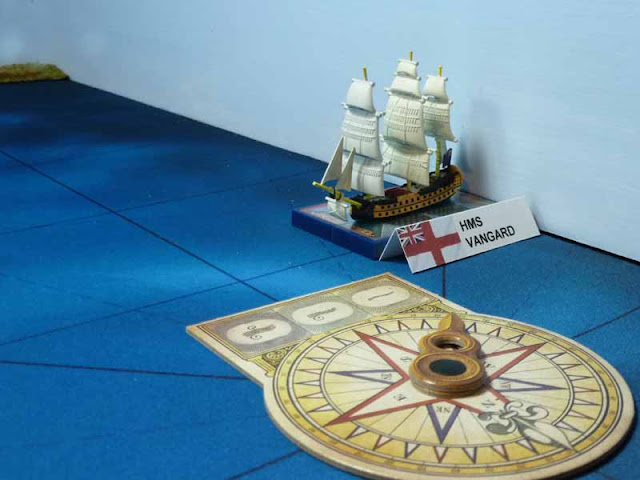 Beware - Johnny Rosbif someone shouted from the bows and sure enough a British 74 was hull up on the horizon. Why the lookout hadn’t seen her earlier I really don’t know but Capitaine Nubuierre didn’t keep such a tight ship as I would have done in his position. 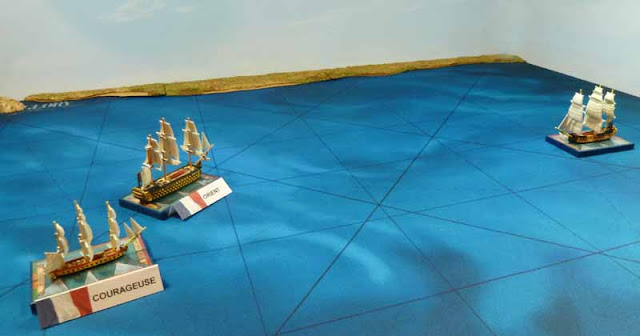 The two ships approached as fast as the wind would allow but Courageous was going to reach us first, if only we could get a towline across we might still be saved. It was a forlorn hope Hermione because a 74 against a 32 gun frigate would be no match at all, but you know that don’t you. You have been listening and learning these past few weeks, a very admirable trait in one so young and beautiful as yourself, but you know there is still much to learn from older and wiser heads, I will endeavour to teach you more.

Ah Baptiste, my glass seems to be empty, would you be a good fellow and go and ask Martine to fill it up and I can continue my tale when you get back. Yes the 98 brandy is the one, I’m glad you remember, and don’t forget it’s from the green bottle, ahh you remember that as well, bien tot.

While we wait for him, maybe I could tell you about the Monkey’s Fist, don’t blush so Hermione, it is nothing but a knot. Yes a grande knot in the shape of a ball, it is usually tied around a stone or sometime a lead ball, the weight allows it to be thrown a long way and you attach a light line to it. On the other end of the throwing line you attach a thicker line and that is how we sailors pass a tow rope from one ship to the other. It is simple n’est pas, although it does require strength and skill to throw it accurately. 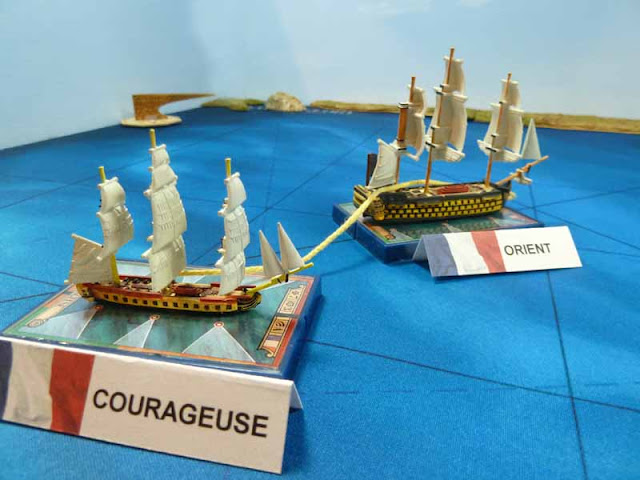 Well of course when Capitaine Nubuierre asked for a man to throw the line to Courageuse everyone stood aside to let me make the cast, at such a critical time we could not endure failure.

The cast was straight and true and caught cleanly by a evil looking fellow on Courageous and they hauled it in, first the light line and then the towing line and we made fast both ends to strong points on our respective ships. 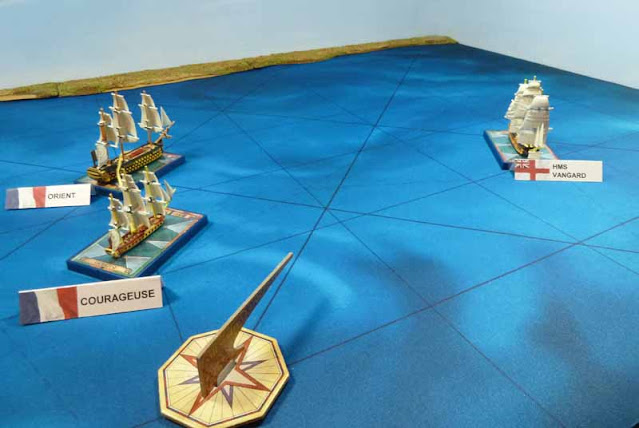 Le Rosbif’s 74 was closing but instead of continuing straight towards us he turned into the wind, a strange thing to do in the circumstances. 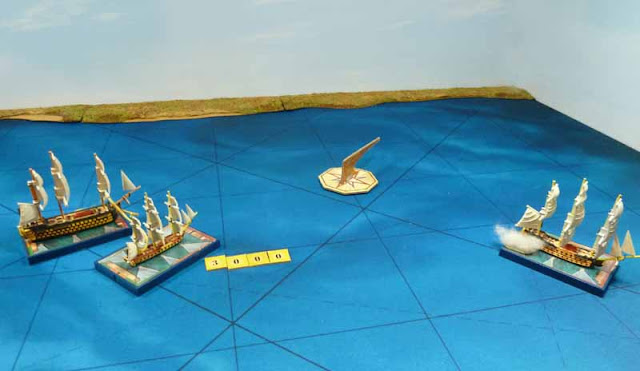 That’s right Hermione we call it tacking when the ship crosses the line of the wind but it is a manoeuvre that can be fraught with problems, there was one occasion that it was nearly my undoing but I will recount that tale another time.

As Le Rosbif turned away from us he let opened fire with his starboard quarter battery, causing some damage to Courageous. She was drawing ahead of us at the time, quite slowly because she didn’t want to put too much strain on the towing line and snap it but the damage was quite superficial and didn't deter her purpose. 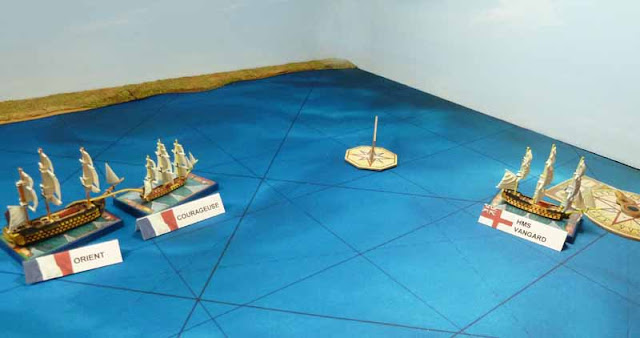 Which was accomplished with panache, but as you have heard me praise French seamanship in the past that will come as no surprise to you Hermione and indeed even your Father Baptiste here will have gathered that by now.

Le Rosbif continued to move away from us as he reloaded his cannon. The only thing I could think to account for his timidity was that he knew what a fearsome fighting ship Orient was, and even in our damaged state dared not approach to closely.

(The main reason though was that the French Commander was using the AI Manoeuvre charts wrongly, but that is another story - best forgotten) 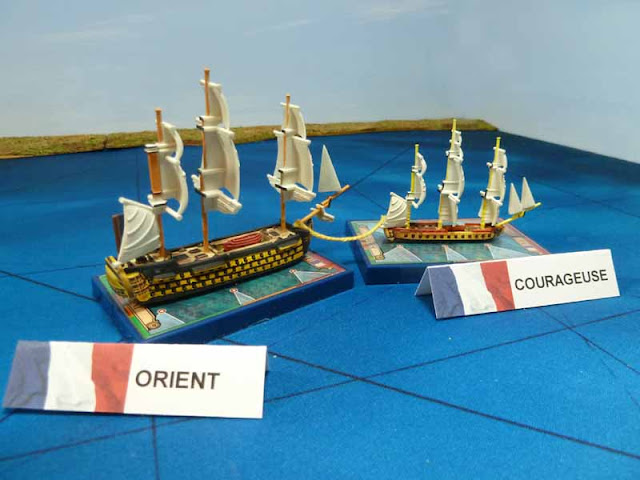 The tow was established and we were making slow progress away from the coast.

The 32 gun Frigate is dwarfed by the size of the Orient and necessarily finds it hard work to pull us away from the land especially as the tide and wind are pushing us towards our doom. 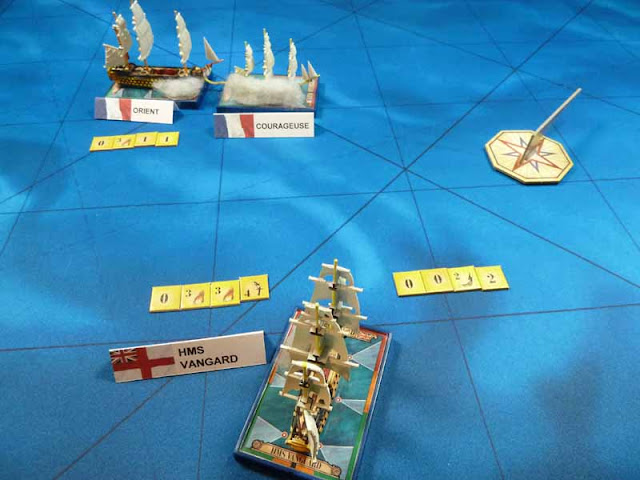 Le Rosbif had tacked again and was approaching with the wind blowing over his quarter, pushing him along quite quickly, he soon regretted his boldness when he came in range of our guns and received a raking broadside from Courageous, but the real damage was done by our starboard bow battery on Orient. Fire blossomed on the enemy ship, maybe we had hit his galley stove I don’t know, we always extinguish ours when joining battle but the Rosbif’s are careless fellows.

What did you say Hermione, who was the commander of the starboard bow battery, why of course it was I, Jean le Vagabond from Marseilles. I had some steady gunners under my command that day, obviously they needed my guidance to lay their guns accurately, but that’s only to be expected from these uneducated fellows. They may have been at sea most of their lives but I had spent a month at the  in  and knew all the latest ballistic science, and of course you know science will always surpass ignorance even if  it is, experienced ignorance.

I had an especial fondness for the No 2 gun in the battery, we called her 'Madame' and pushing the grizzled gun captain aside I laid her carefully and fired, this was the ball that took down the Fore mast on our enemies ship and won the battle, a claim that the gun captain on No 3 gun disputes to this day but what did that cross-eyed old greybeard know. 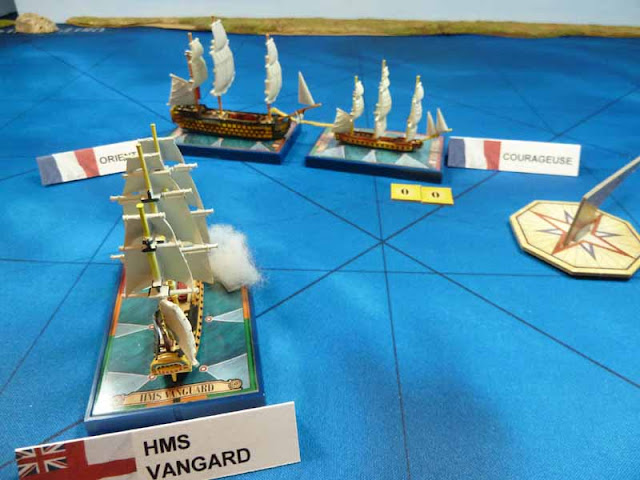 The panic and confusion on the enemy must have been dreadful to behold because when they brought their starboard battery to bear the shots fell short and did no damage at all. 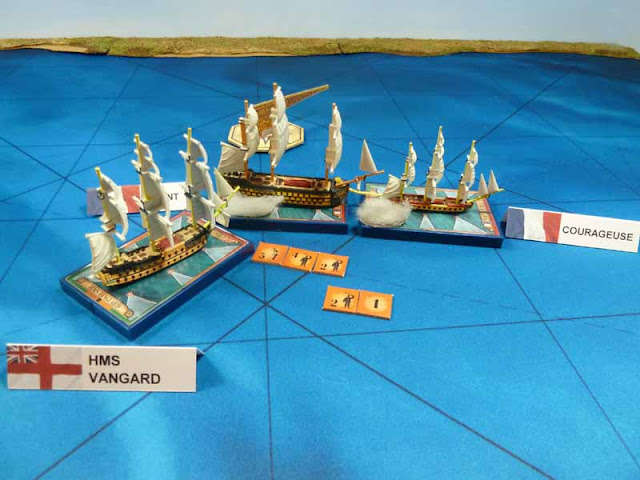 Heartened by the damage I had caused to the enemy, our stern battery did great execution to them as they came closer. By now there was total panic, the fires were spreading and we were concerned that she shouldn’t collide with the old Orient, if we touched the fire would quickly spread and that fire would have been the end for us.

The British ship struck her colours and surrendered rather than take a further pounding from our canon but the fires were so well established that she burned to the water line and sank without a trace. We could not put along side because of the fire and all our boats had been destroyed in the previous battle so we could only rescue a few of the poor fellows, those who could swim and they were not many.

A sad sight for us all.

Well Baptiste I must be off to my bed, one day I will tell you about that fight in the Orient, indeed my first sea battle and the reason we were in such dire straights when Johnny Rosbif caught us on that lee shore but it will have to wait for another day. Mademoiselle Hermione it has been a pleasure to have your company tonight and I look forward to meeting you again, your nautical knowledge is a pleasure for an old man to behold.

Yes I shall be here in Martine’s bar on Monday evening, maybe I could tell you the story of how I protected a convoy of valuable merchantmen from Johnny Le Rosbif when I was Capitaine of my true love, your namesake Hermione and how I almost came to grief through the foolish mistakes of my enemy.

Baptiste maybe you would care to order a fresh glass of the 98 when we meet on Monday, it lubricates my tonsils so well.

Adieu and Bon Nuit to you both. 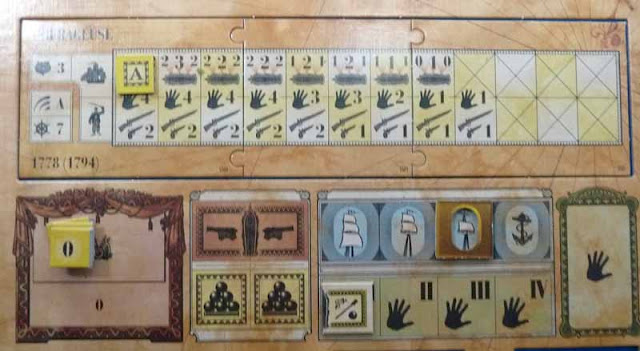 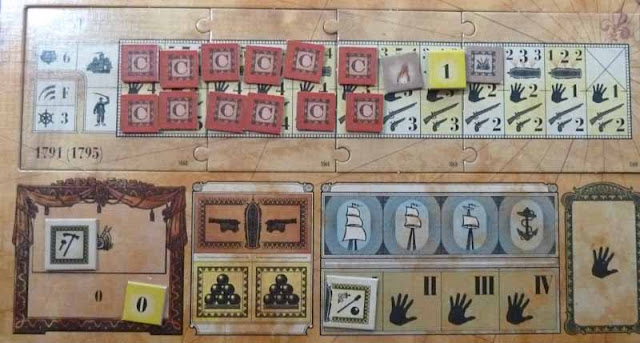 Orient, the C damage is the damage from the previous battle that was included in the scenario directions. 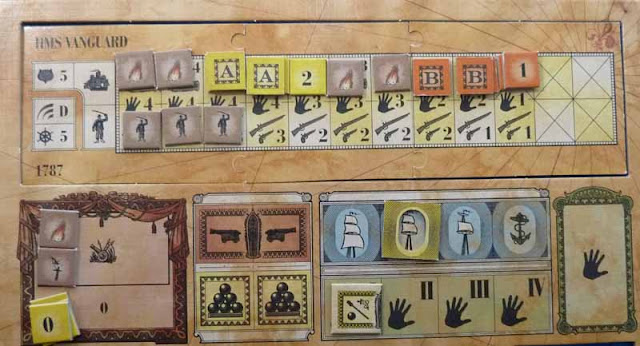 Le Rosbif’s 74 a smouldering wreak after my forward starboard battery had decimated them.
Posted by Vagabond at 19:32 14 comments: