I have had an awful lot of trouble posting this, probably because I wrote it in Word and Blogger does not like Words format, I may have overcome this problem. I will have to wait and see. Any advice gratefully received.
As I said in the preamble post I am intending to keep a record of games and this one goes back 5 years, however I have just written it up from notes and pics taken at the time, so you could argue that it is a current report. :-)
It's a simple game with a simple scenario written by a simple man, I enjoyed it then and just as much with this write up, and this is what I was hoping to achieve creating the blog, although posting difficulties nearly ensured the very 1st post was the last. :-(
I had a very witty opening section to the post but that got lost in the fiasco of trying to post, so you have to put up with this boring one. One thing to note is that text refers to the picture above it, hopefully that would have been clear when you read the report.

THE GAME
The local militia had heard that Vincent “Black” Lightening and his biker babe Angie were in the bar in a seedy part of town. They are isolated from the rest of their gang and would be a soft target, well as it turned out - not so very soft.


Captain Andy Donovan's orders were to bring the Bikers in alive, but he thought dead would be better, and safer. 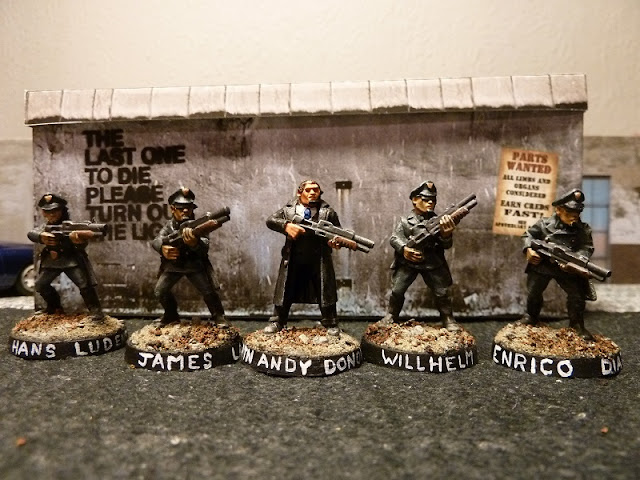 The Cops
Captain Andy Donovan (Known as Big Andy behind his back), with Hans Ludenstein and Enrico  Diaz were the 1st on the scene and due to a lucky dice for PEF, James and Willhelm came to reinforce them. 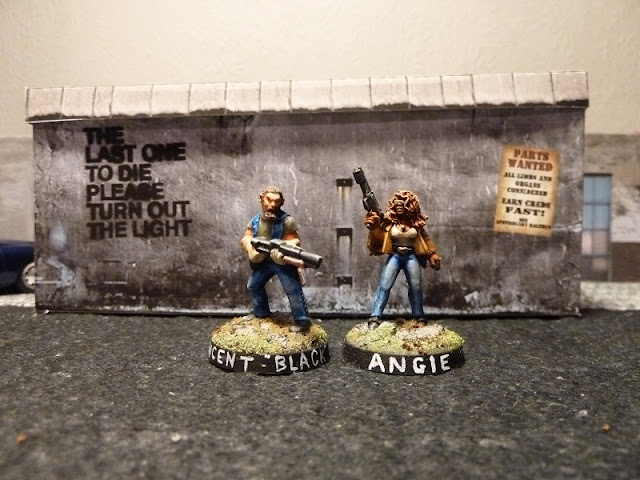 The Bikers
Vincent and Angie pictured here with the bar behind them. They had chosen a bad place to drink, not because of the clientele, or the danger of salmonella or being bitten by a rat. No the real danger was that the bar has no back exit and no windows except at the front by the door.
The beer was good but the location was bad. 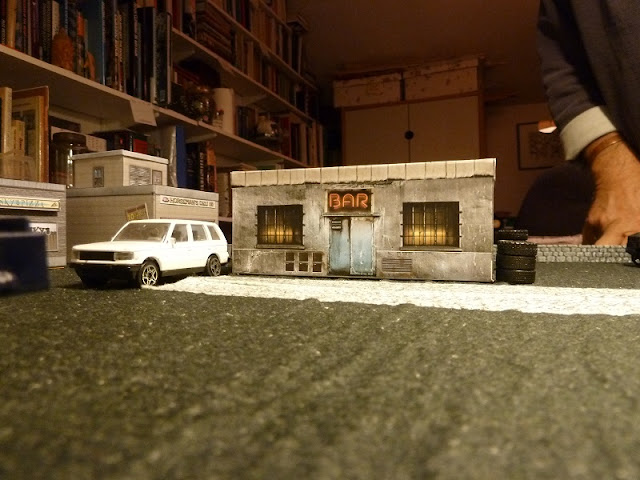 The front of the bar. The lights are on and someone is home. 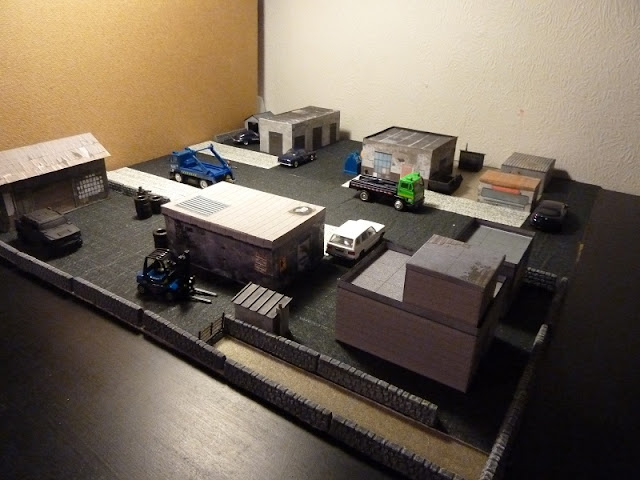 Overview of the board.


The bar is between the forklift truck and the white car, the cops have the front of the bar covered. You can just see Hans hiding behind the tyres to the left of the bar, Captain Donovan is behind the blue truck and Enrico behind the green truck.


The militia did not know that Vincent and Angies bikes were in the corrugated shed behind Hans, but it probably wouldn’t have made any difference to their plan. 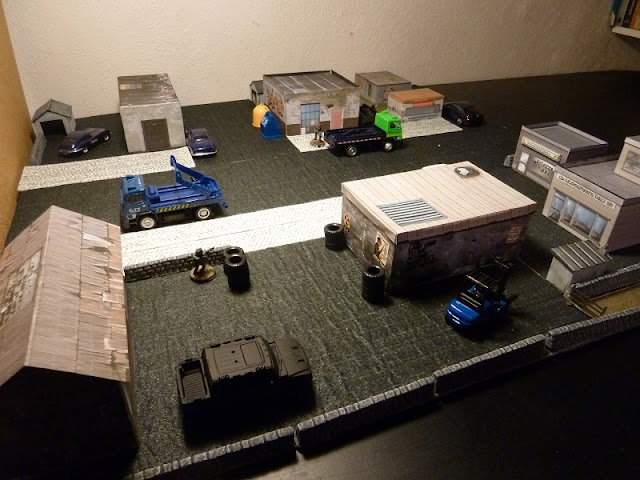 Turn 1
The militia are in place, Captain Donovan shouts for Vincent and Angie to throw out their guns and come out with their hands in the air.
Knowing that there is only 1 exit and he has it covered  - well only an idiot or a mad man would try and make a run for it. 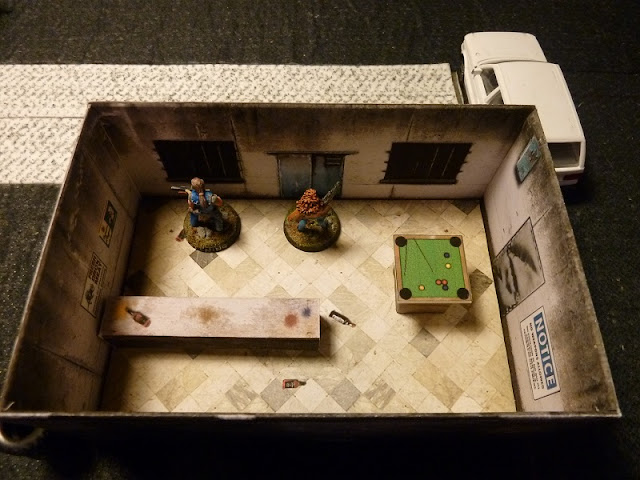 Turn 2
Here you can see “Mad man” Vincent and his girl Angie in the bar, they will be known in future as V & A, like the museum but not quite as sophisticated.
Well Vincent fails his Brains test and passes his guts test, and shouting “you ain’t gonna take me alive copper” he fasts moves out into the street running for the bikes, Angie with guts factor of 5 had no problem following him, she also had as few brains as Vincent and so didn’t try to stop him. 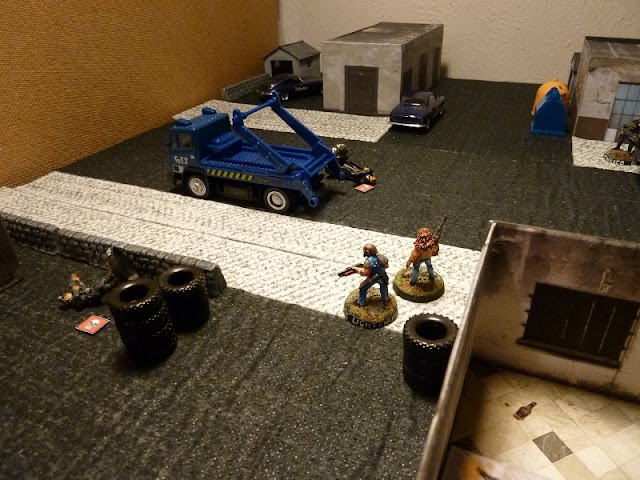 This was a very dumb thing to do - partly because they didn’t know where the militia were placed, and partly because they also failed their fast move test and so didn’t get very far, they were plumb in the firing line of all three Militiamen.
However fortune favours the dumb and brave sometimes and they beat the militia to the draw (insight test), and as they were both reasonable shots and because they were lucky with their firing dice and etc, etc 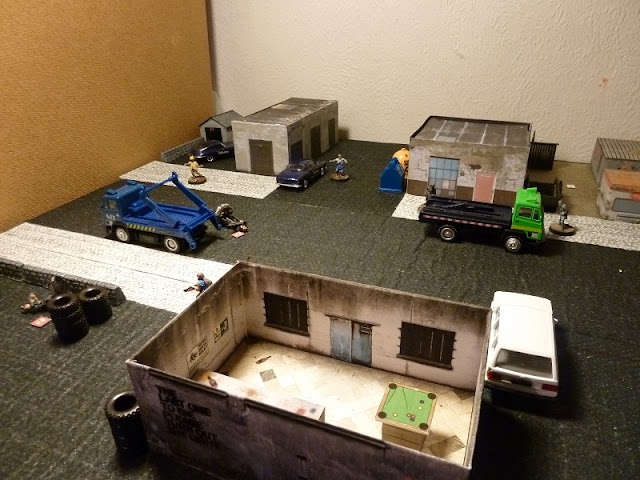 Angie hit Big Andy Donovan and he went down Out Of the Fight (OOF) and Vincent hit Hans and also put him OOF. 2 and zero, looking good so far. Enrico by the green truck passed the leader down test but didn’t fire. The saying that attack is the best form of defence is proving true here. 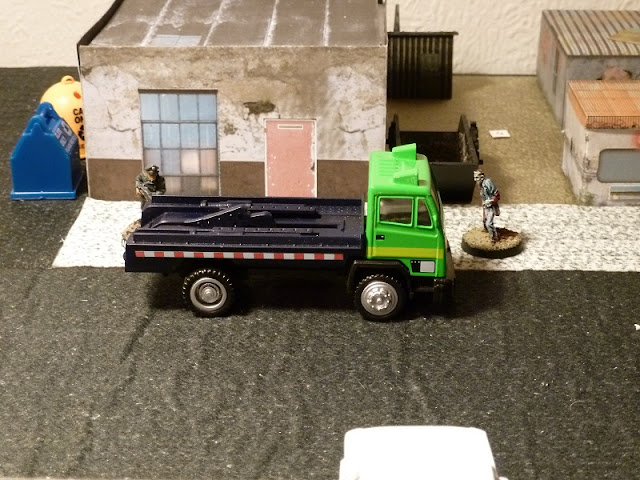 One of the zombies is moving towards Enrico and behind it the card counter represents a PEF (Possible Enemy Force), this turns out to be the other 2 militia. In this scenario the PEF’s were not all bad things. 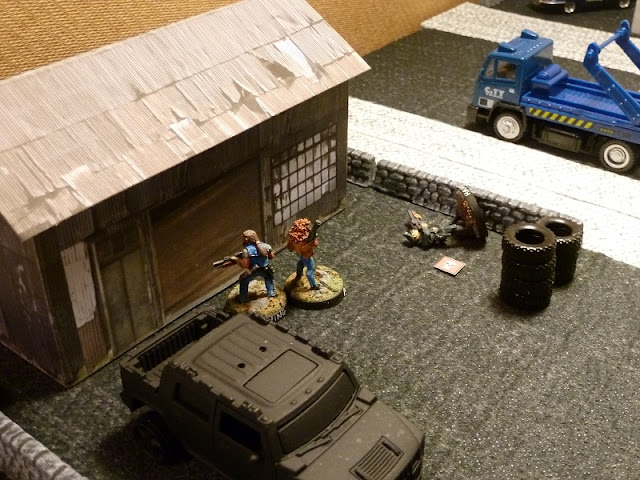 Turn 2
V & A fast move to the corrugated shed and make it to the door. 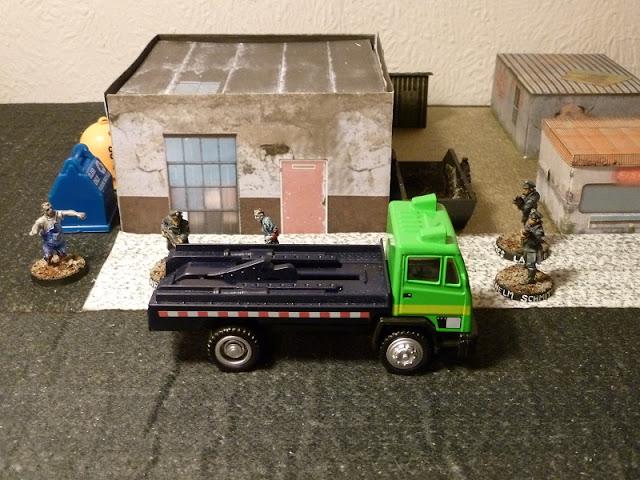 Turn 2
PEF resolved and the 2 militia move forward behind the zombie, Enrico sandwiched between the 2 zeds turns to his left and calmly guns down the zombie in the blue blood stained suit, not bad for a rookie. Of course if he had missed then the shot may have hit his comrades who were behind the zombie. You can see why he is a rookie. 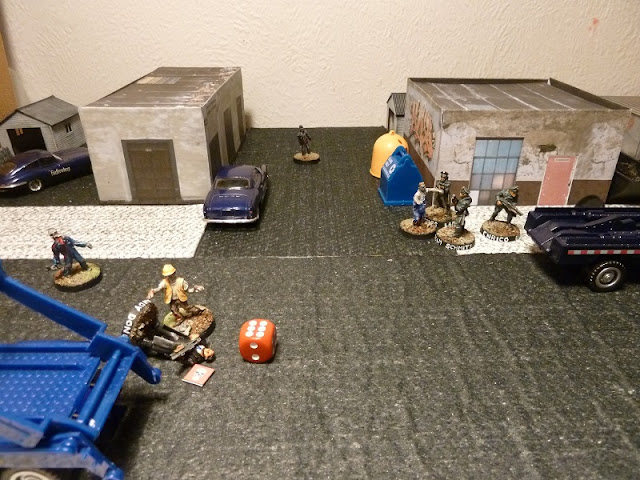 Turn 3
More zeds generated by shooting and the 1st one reaches Captain Donovan who is not dead but just OOF. However when the zombie starts to feed he becomes dead. The other 2 Militiamen attack the lone zed behind Enrico and fail miserably, they only managed to achieve a draw, this is some tough Zed.
V & A look at the door and realize they are going to have to turn the handle to get inside. (they are inactive) 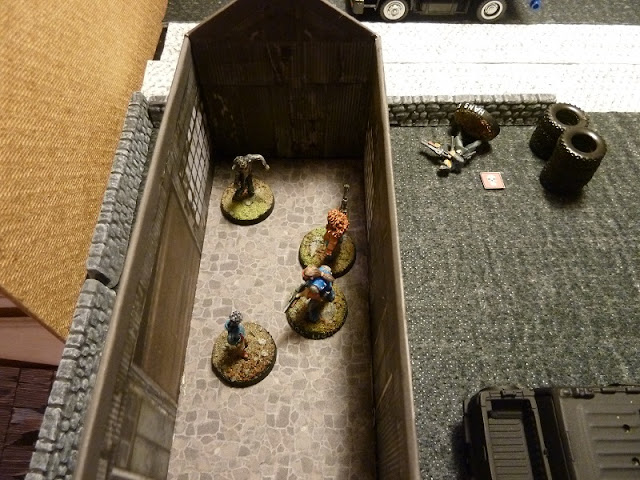 Turn 4
V & A enter the shed, see 2 zombies and kill them, the bikes are virtual ones, I don’t have any and so used my imagination, this is a game with lead men so I obviously have a good imagination. Vincent is out of ammo.
If anyone knows who makes 28mm bike please let me know I would appreciate it. Cheers. 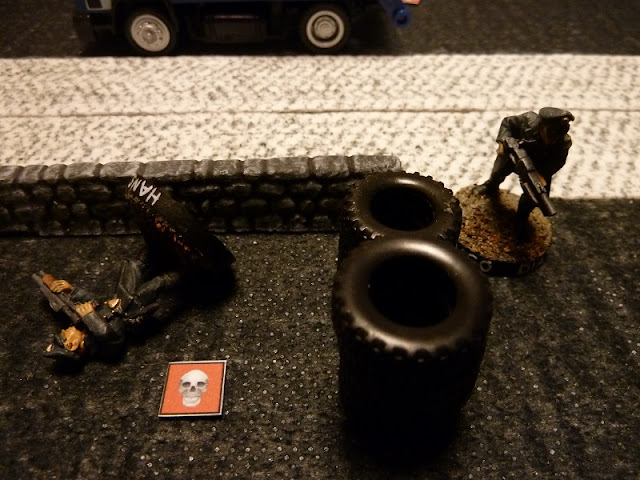 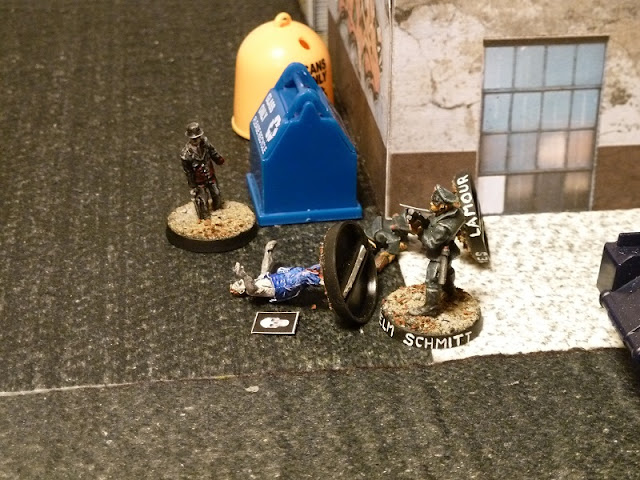 He was wrong, wus James gets beaten to the floor before Willhelm kills the zombie. 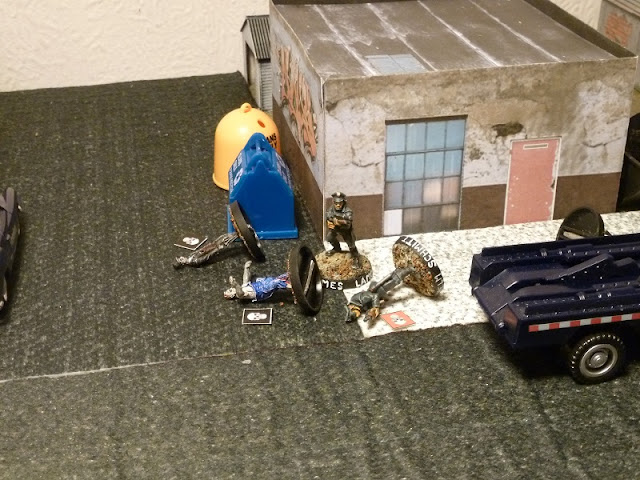 Turn 5
I made a mistake it was wus Willhelm who was OOF, wus James was not a wus and beat the zed and then turn 5 beat the next one. Sorry I will try and keep it together a bit better in the future. 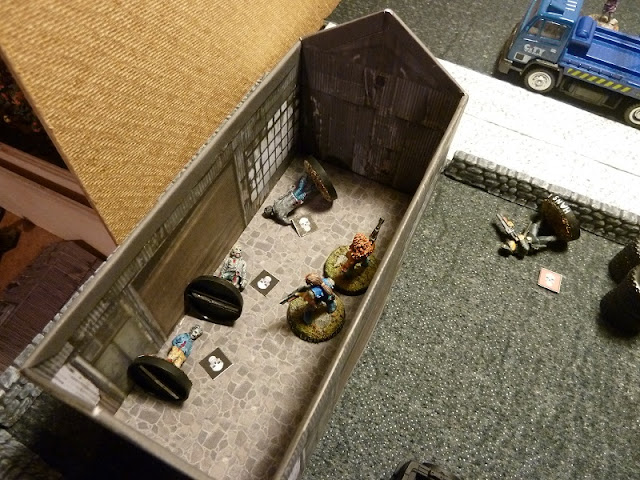 Turn 5 still
Another zed entered the shed and Angie killed it, Vincent forgot to load his shotgun, well I forgot to test for him to load it and so decided in the excitement he had forgotten. It’s the blame culture we live in, it can’t be my fault so it has to be a little lead figures fault. It works for me J


James Lamour shot a zed but threw double 1 so I decided his shotgun had jammed irreparably. 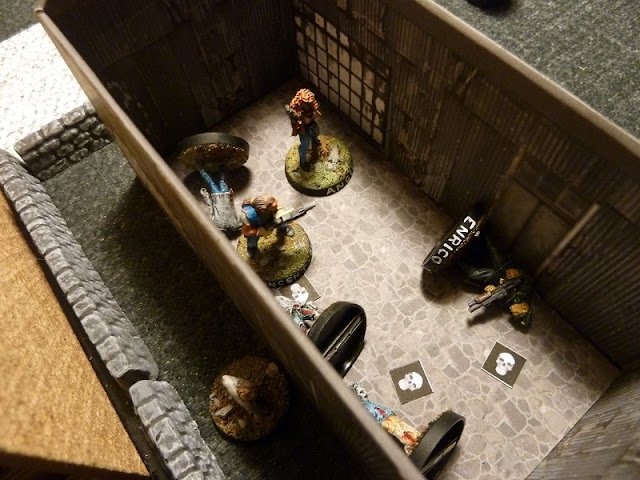 Turn 6
Only militia active, Enrico bursts into the shed snap fires at Vincent and misses, Vincent ducks back but Angie returns fire and kills Enrico.
A black skull counter indicates the figure is Obviously Dead (OD) and a red skull indicates it is Out of the Fight (OOF) but you’ve worked that out by now I expect. 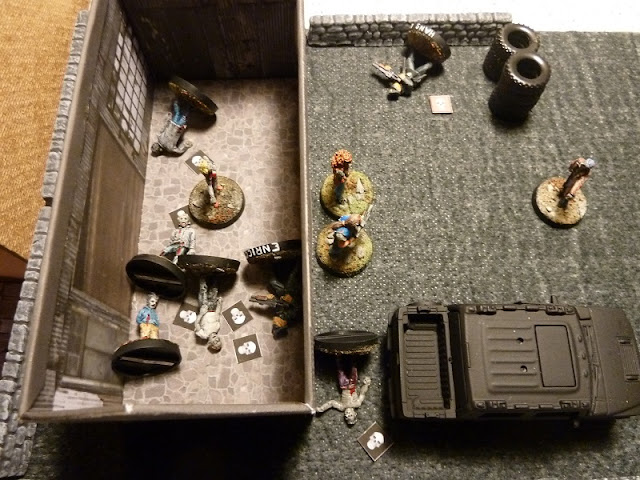 Turn 7
V & A climb on their virtual bikes and wheel them outside, where V is attacked by a zombie, he has forgotten to load his shotgun for a 2nd time, so can’t fire but as he’s an ace fighter I’m not worried.
It’s a long story but in my game rules zombies have a brawl factor of 1 and Vincent’s is 5 so he should win easily.
Brawling in these rules is done by rolling a number of D6 that are equivalent to your Brawl factor. So Vincent rolls 5D6 and the zed rolls 1D6. You pass dice by rolling 1, 2 or 3 and fail with 4,5,6, it’s a bit counter intuitive but for those of us who always roll poor dice it’s good.
If you pass a dice and your opponent does not then you win. If you both pass dice then you only re-roll the pass dice for the next round, and if you pass and your opponent does not then you win.
I have 3 rounds of combat per game turn, so if after 3 rounds both opponents still have passed dice then the fight continues afresh next turn.
Ed explains this much more clearly in the 2 Hour Rulebooks than I have – sorry, but hopefully you get the gist.
1st round Vincent rolls 5D he fails 3D and passes 2D, the zombie passes his 1D, so next round Vincent rolls 2D and fails 1D and passes 1D but the zed also passes his 1D. This is what makes these combat rules exciting. Vincent is now down to the 1D and so is the zombie, the final round and Vincent passes his 1D but the zombie finally fails his dice roll and is killed. VERY CLOSE. Maybe he will remember to load his shotgun next time. 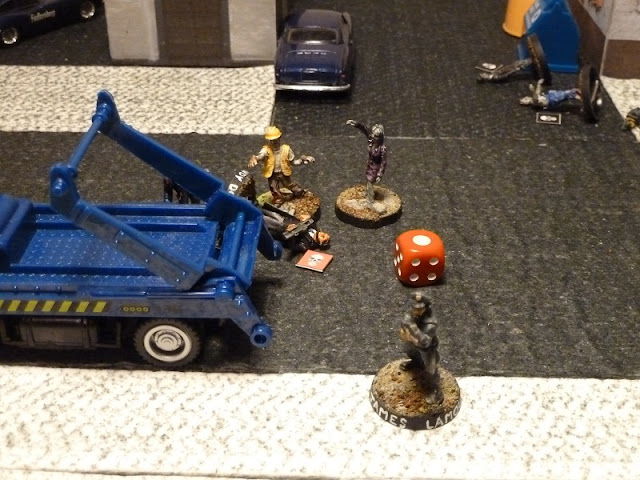 James Lamour runs forward and takes a shot at V & A as they ride past, however I had forgotten to get him to pick up Willhelm’s shotgun and as his own was jammed he just swore a bit, then a bit more when he realized he was the only human still alive, surrounded by zeds and with a broken shotgun. I knew I should have joined the navy, he thinks. 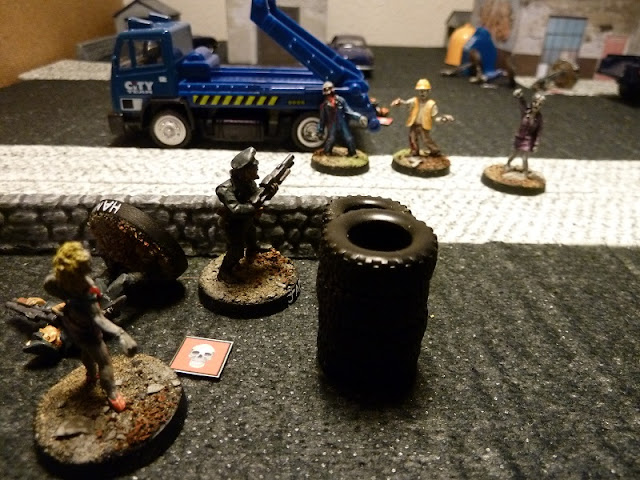 Turn 9
James jumps the wall and picks up Hans Ludenstein’s shotgun.
V & A disappear off the board having made their getaway, the legend of this escape grows with each telling. 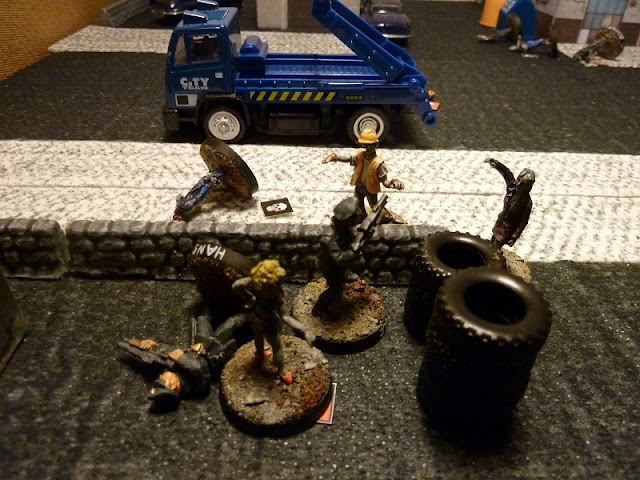 Turn 10
James shoots 1 of the attacking zeds and kills 2 others in melee, he has a quite low Brawl factor of 3 so was very lucky.


However as they say it’s better to be lucky than dead!! Well I think that’s how the saying goes. 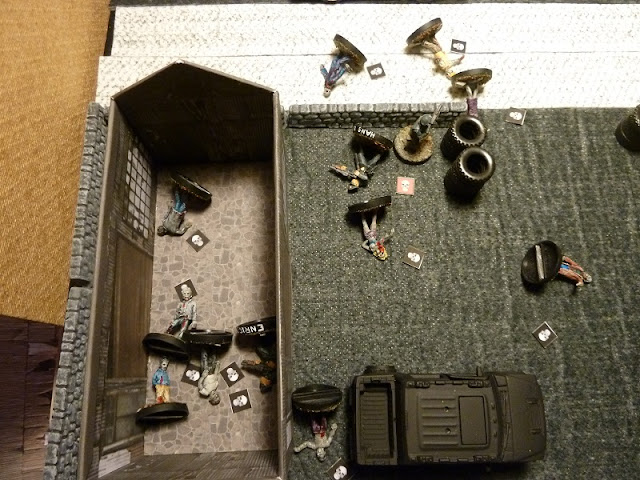 Turn 11
James kills the remaining zed in melee, picks up Hans and goes home. His legend does not grow, there is an enquiry into why 5 top militia let Vincent and Angie escape and also had 3 of their own men eaten by zombies. It did not reflect well in his record which was probably a little unfair, however running round with a broken gun almost certainly let V & A escape and also nearly got himself killed. 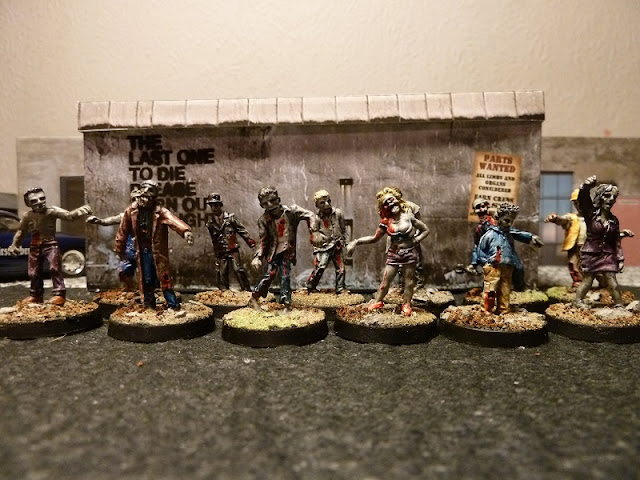 Group shot of the Zombies for the Undead Herald, the weekly paper read by all zombies who still have eyes.
A fast, furious and fun game, one that I thoroughly enjoyed. Forgetting to reload Vincent’s shotgun TWICE added drama and then when I realized Militiaman James Lamour was running round with a jammed shotgun as well it just added the icing on the cake.
I like to try and bring unpredictability into my solo games by design, but it is even better when it happens spontaneously like this.
I would be pleased to hear what you thought about the game and any suggestions you have to improve either the scenario or my write up.
If there's anybody out there let me know – thanks for reading – Cheers.
Posted by Vagabond at 21:46 25 comments: