The Adventures of Becky - Chapter 3 Boris and the Swan

This story follows on from the previous and rather disastrous episode where Boris stole the journal from Becky and her chums escaping with it and leaving them tied up in a remote house near Inverness - Scotland.
The good news is that the girls have a lead to the Swan Hotel in Inverness. This turns out to be fortunate because Gabrielle has a friend who works there, a quick phone call and she confirms that the 5 Bikers have already checked out and left, but a large bald man is still in room 3 at the hotel although he's informed the Reception Desk that he will check out this morning.

No time to loose then.

The previous game is here https://vagabondswargamingblog.blogspot.co.uk/2018/02/the-adventures-of-becky-midnight-callers.html

I wish I had the silent movies soundtrack whenever a chase is taking place so that I could have it play when you are reading this. It might make it a bit more exciting.

As it transpires all the action will take place in the Swan Hotel but I didn't know that beforehand and had the table set up, so you will have to endure a few gratuitous shot's of Inverness and then it's back to the card plans. Sorry. 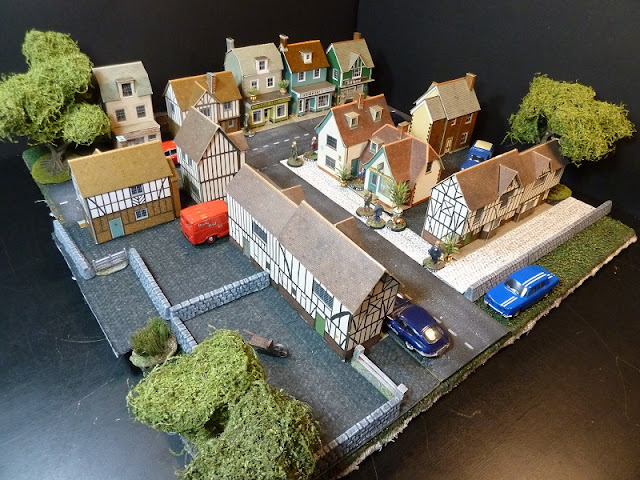 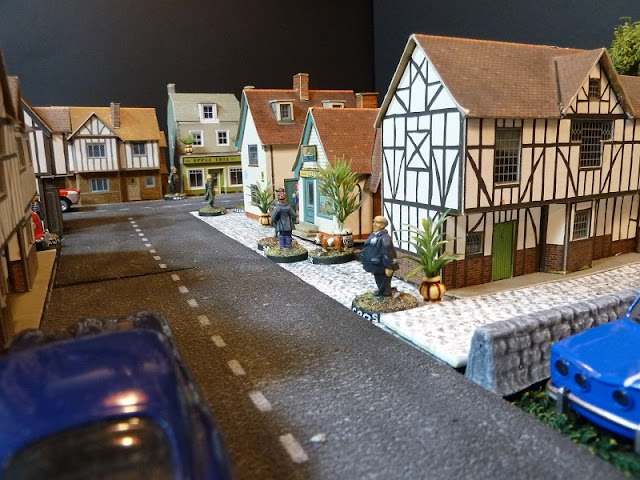 The Swan is the building with the blue doors and this is the view from the E type in which Roxanne and Susanne are keeping an eye on the front entrance.

Boris will leave in a time determined by the dice. Each turn both parties throw 1D6 for activation and each 7 thrown reduces the number of turns before Boris leaves, it needs 6 throws of 7 and he leaves and if the girls have not done the business by then it will be too late. 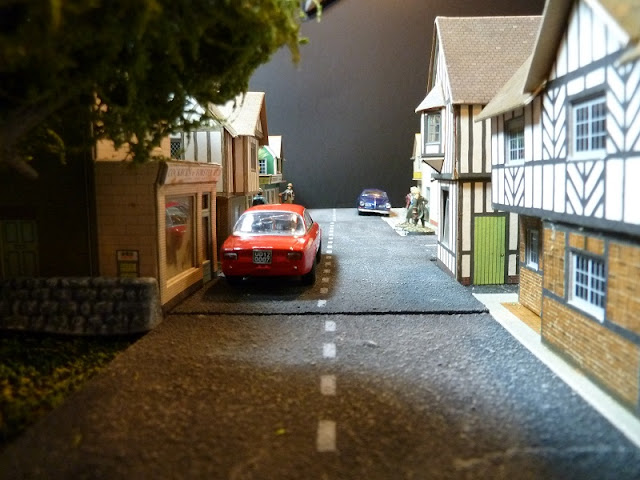 One of the side streets in the town. 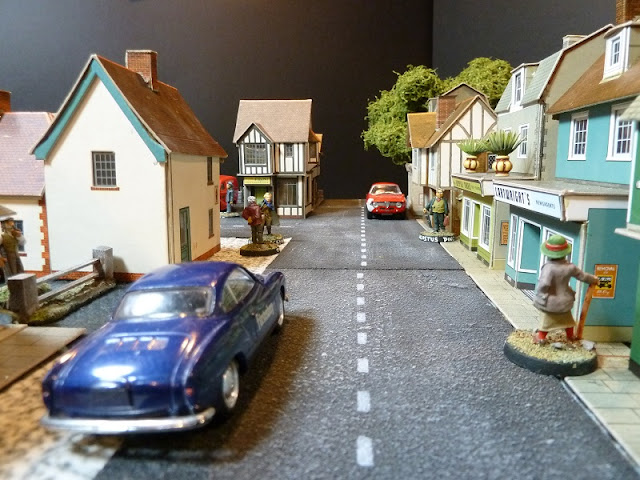 And another of the side streets. There are only 2 streets :-) so you're saved from more shots of streets.

I'm sorry but I quite like these moody shots that have nothing whatsoever to do with the story. 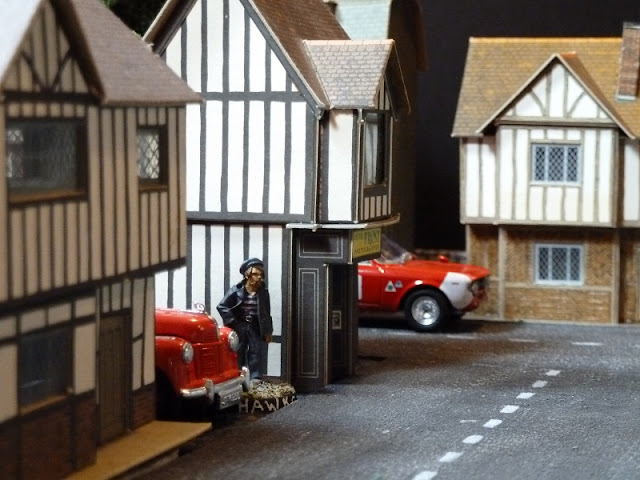 A mysterious down at heel sailor, is he drunk and just propping himself up on that old Austin or could it be more sinister and he's lurking in the alleyway for a more nefarious purpose. 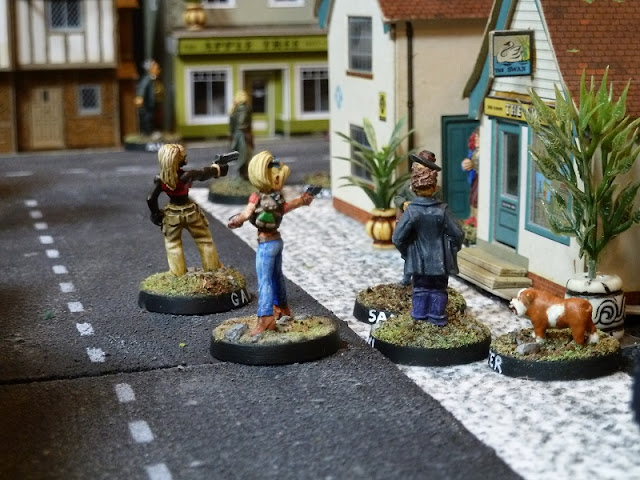 Becky and Gabrielle shown here walking over to the Swan

Turn 2 - Becky and Gabrielle arrive at the front door of the Swan. 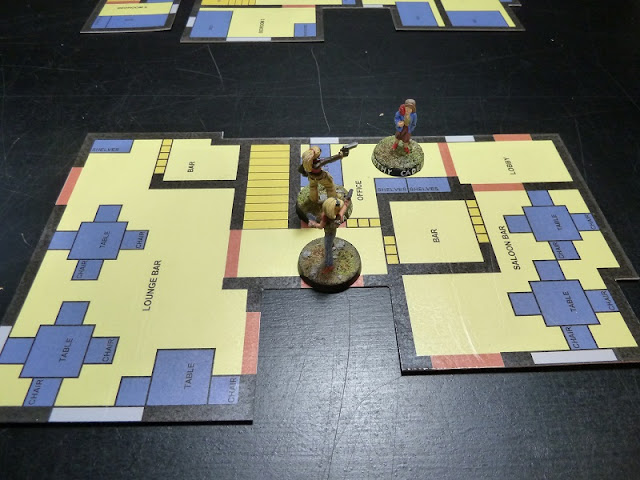 Turn 3 - 7 thrown. The girls enter the Swan and meet up with Gabrielle’s friend who confirms that Boris is still in his room but leaving shortly. 2X7 thrown.

Turn 4 - The girls decide to change into maids outfits, dice roll confirms this will take 4 active moves. In retrospect I’m not sure what my thinking was here. I have no figures in maids outfits, I probably would like to have them!!! I guess the thinking was they would be able to take Boris by surprise. – hum – better not go there.

Turn 8 - Girls active and now in the maids outfits. No comments please.

Turn 9 - 7 thrown, girls active and through the Office and to the bottom of the stairs 5X7 thrown, Boris has packed his bags and is getting ready to leave. Just needs one more 7 and they will be too late. 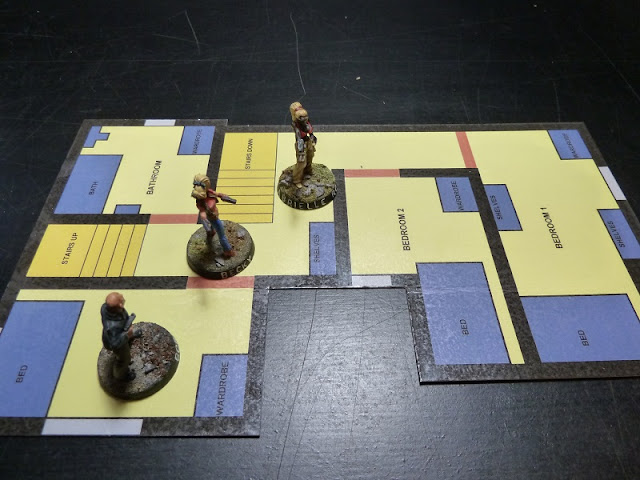 Turn 10 - Girls active and go up the stairs and knock on the door.

Turn 11 - Boris not suspicious and just asks who it is, “Maids to clean your room sir”. Responds Becky.

Turn 12 - 7 thrown, - just leaving says Boris and opens the door, he fails his insight test and so does not recognise the girls in their thin disguise as maids. Just shows what a short black dress, white apron and feather duster will do.

Turn 13 - Boris turns to pick up his case and laptop, the girls should jump him now but for the 1st time in the game are inactive – and don’t move – bugger. 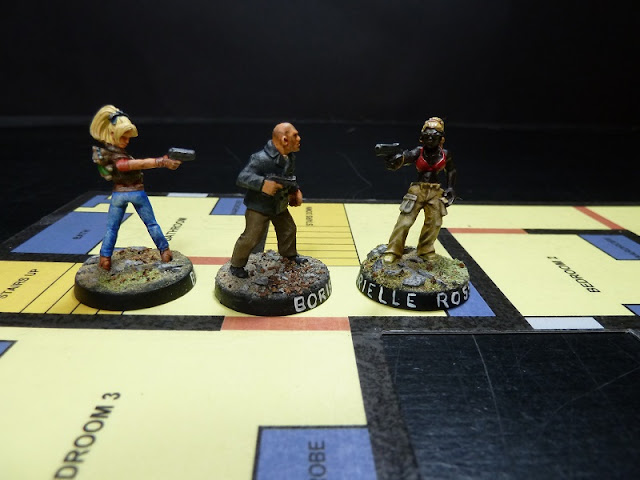 Turn 14 - Boris comes out of the room past Becky and for the 2nd time in the game the girls are inactive. Next turn he will be down the stairs and then it will be difficult and a noisy affair to stop him.

Turn 15 - Boris fails to activate but finally the girls do, but only just. Becky who is behind Boris saps him hard, he is stunned but does not go down and turns groggily round only to be hit with the sap a 2nd time and as she hits him again he goes down to his knees.

Turn 16 - The girls drag Boris into his room and close the door. The dice roll says it will take the girls 5 turns to bind and gag him. How soon before he wakes and starts to shout, hurrah a 6 is rolled so Boris will wake in 6 turns, by which time he will be securely tied up. 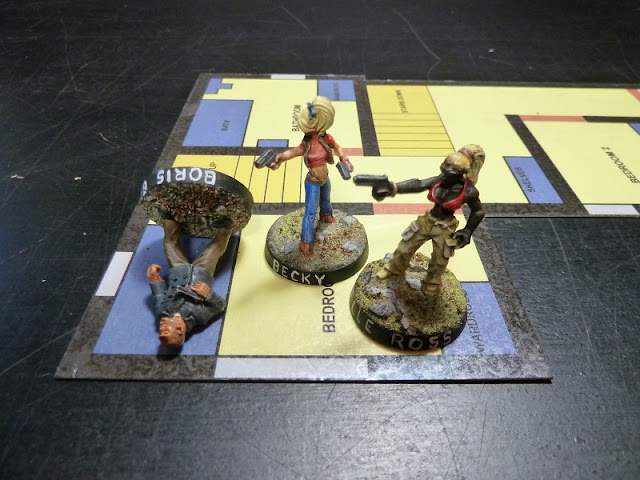 Turn 22 - Boris awakes, tied to the bed and gagged, with 2 beautiful girls standing over him, not every mans nightmare scenario. However for Boris it is not looking too good.

Turn 23 - In my version of the rules everyone has an affinity, that means that if they want to do a conspicuously good or bad act they roll a dice and have to score higher or lower than their affinity level to do the deed.
Of course this is totally unlike Wargamers who would shoot their best friend in the back if it would win them the game.

In this case to do a bad deed the girls have to roll higher than their affinity. Gabrielle is a bit of a saint with an affinity level of 6 and so has to roll higher than a 6 on a 6 sided dice to do a bad deed, not much chance there then.
Becky on the other hand has an affinity of 4 and so 5 or 6 allows her so do a bad deed and she rolls 6. BAD news for Boris and he knows it, Becky puts a knife to his throat and asks the 1st question, Boris is a coward – guts 2 and so has to roll 2 dice and get 1 or 2 dice at 2 or less to resist, he rolls 1 and 1. Hum this might not be as easy as I thought.

Turn 24 to Turn 34 - Every time Becky was able to question Boris forcefully he was able to hold out. Eventually Gabrielle insisted that this was going no where and Becky had to agree.

Turn 35 - The girls called it a day they recovered Becky’s dads journal and files and took Boris’s laptop, passport, driving licence, and library card – no only joking about the library card, that wouldn’t have been a very nice thing to do.

They then left quietly, partly untying him so that he would be able to leave later with out causing a fuss and getting the police involved.

So a good result for Becky and the girls, recovering the information they had previously lost and not had time to read thoroughly, there is a good possibility that they will get a lead from the laptop as to whoever is employing Boris, they all agreed he was not the man at the top.

These games were exciting to play but there doesn't seem to be much happening when I've actually written them up and re-read them. However a change of pace and another chapter concluded in Becky's saga.

If you are still here - thanks for reading, and let me know you passed this way.
Posted by Vagabond at 18:37