After the debacle of the first attempt for Supervillain Alexander Lorne to meet with Boss Cotton and sell a shipment of enriched uranium, a second attempt was arranged, neither of them realized that the traitor was one of their own associates. So 2 weeks later but in the same place and aiming for the same bar to make the hand over at the same time of day, the various elements were in place, same encounters and PEF’s.

The pervious game is here https://vagabondswargamingblog.blogspot.co.uk/2018/01/the-uranium-handoff-game-of-two-parts.html

The only difference was that the crack Marine team was in disgrace and Andy Donovan and his team of law enforcement officers had been drafted in to make the arrest, they were joined by Special Agent Samantha Price.

Again I was playing the part of the ‘good guys’ and I still thought my original plan was a good one, split into 2 teams 1 by the cross road and 1 in the Deli opposite the bar. 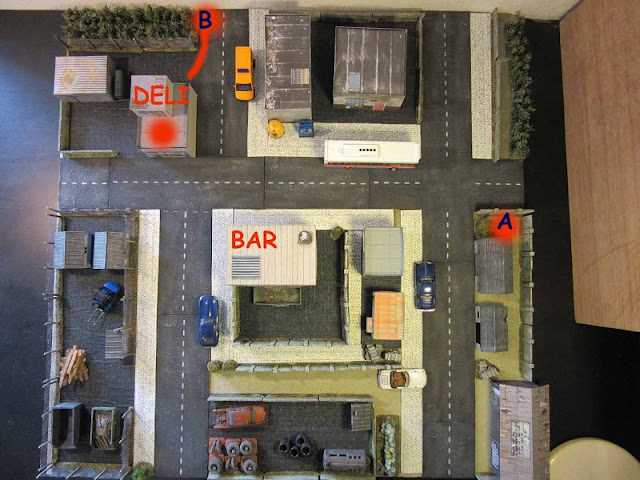 Andy Donovan and his team the veteran Willhelm Schmitt and the rooky Enrico Diaz climb over the wall at point A and remain in position, and Samantha (Sam) Price and her team Hans Ludenstien and James Lamour enter at point B and make their way quickly and unobserved this time, into the Deli to get an overview of the Bar.

Using the same start criteria as the previous game – dice rolled for my 2 teams determine when they start and everyone else starts on turn 4. The 2 teams arrived in plenty of time to set up in position, I had better dice this time. Sam, Hans and James - team B arrived on turn 1 moved down the road, on turn 2 they were outside the back door of the Deli and find it unlocked. Andy, Willhelm and Enrico team - A climbed the 6’ high wall and dropped down into cover behind some bushes, no one saw them, - looking good so far. The encounter markers were on the board at this point, randomly placed and none had been triggered. 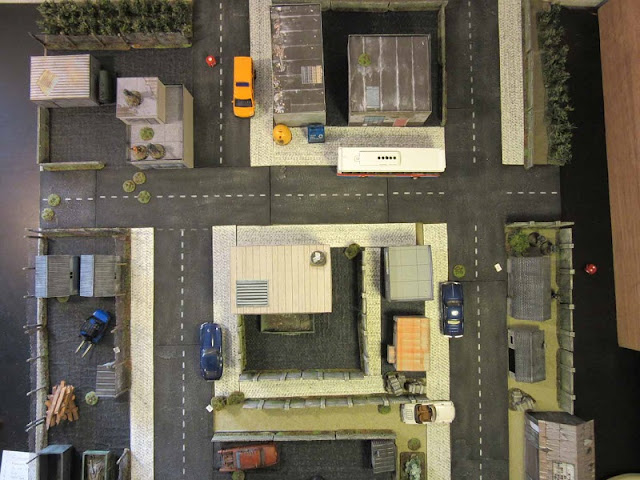 Difficult to see but the green encounter markers are shown as well as team B who had moved into the Deli and team A moved up to the bushes, the dice on the board show the arrival turn of the 2 teams and the small white rectangles are the PEF’s (Possible Enemy Forces)

Turn 3 – Sam’s team quietly open the back door and enter the Deli, they are on high alert after the fiasco last time for the Marines and they have something to prove. The 1st card is turned over, it is a 2 which is Jennifer Ryan the right hand man + 1 or 2 henchmen, I roll and get 2 henchmen, then roll for who they are, Erika Klaus and Elvis. Jenny has 1 bag, Erika the other and Elvis is obviously riding shotgun.

So Alexander Lorne has placed her back up team with the uranium in the Deli where they can watch for Boss Cottons arrival in the bar and so when Alex gives the go ahead that the deal is good, they are in place to be able to bring the uranium over. 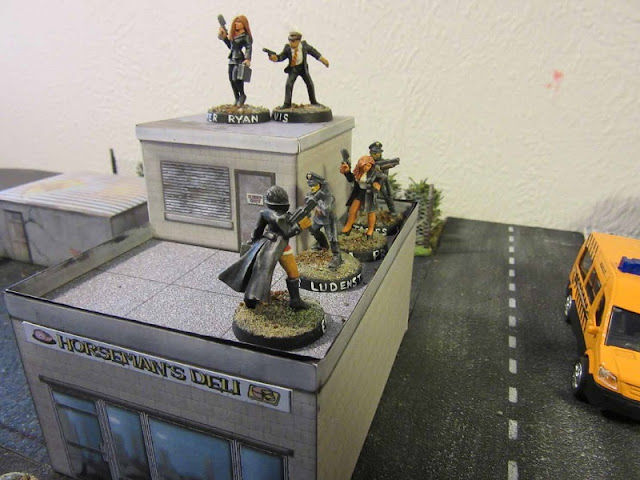 Turn 3 – random placement has Jenny and Elvis up stairs in the roof annex watching the bar and Erika Klaus down stairs. Hans is leading closely followed by Sam and James. Unfortunately this is one of the buildings that doesn’t have a removable roof but you get the idea.

Hans and Erika react simultaneously, Sam is a little slower and James at the back can’t see what’s happening. Erika is a little flustered and snap fires, rushing her shot and misses but the veteran Hans doesn’t make the same mistake – BOOM – the shot gun sounds incredibly loud in the confines of the back room, Erika goes down in a heap, click goes his 2nd shot, his pump action shotgun has jammed but Erika is Out of the Fight (OOF) and he has time to fix it.

I have Jenny and Elvis upstairs take a reaction test for the firing and they decide to stay put and keep quiet, Jenny the brains of the pair of them is also a bit of a coward and she stops Elvis from making a rash move. Well would you go downstairs if someone is firing a shotgun there? 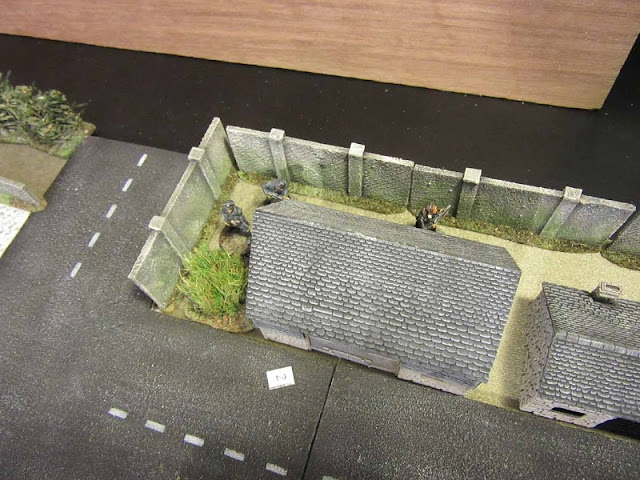 Turn 3 – over on the other side of the board Andy Donovan is making his way to the right behind the barn and Willhelm is behind the bush with Enrico as back up. The PEF is resolved as nothing to worry about, but next to it, out of photo is an encounter token. 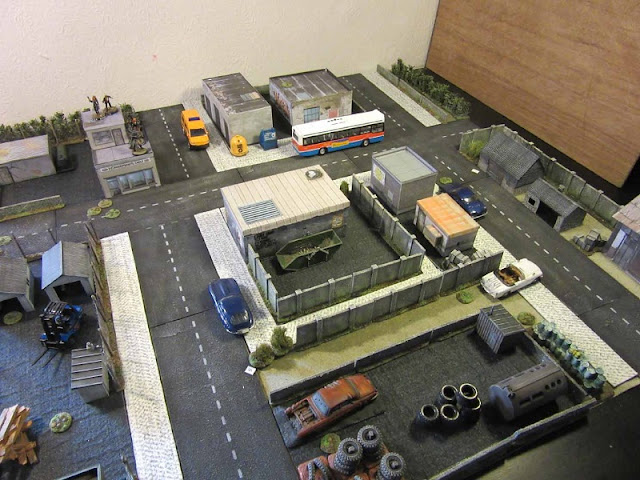 Turn 3 – pan back and you can see the encounter token over by the blue car, this turns out to be Boss Cotton, Mad Dog Maguire and Erik Yonthorn making their way round to the bar to collect the uranium. 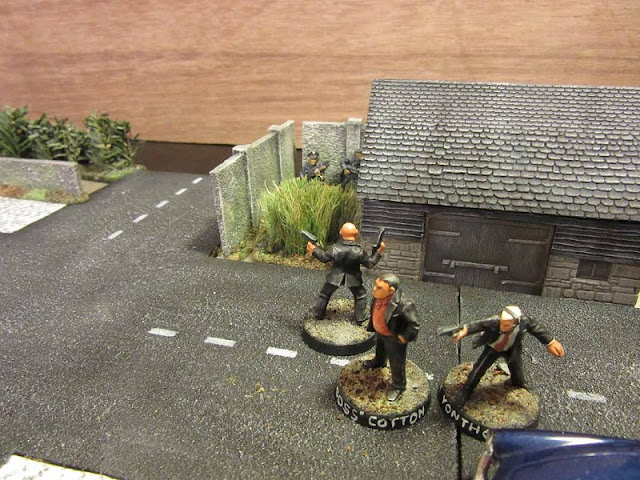 Turn 3 – Mad Dog has the senses of a wolf and realizes there is something behind him and he spins round like lightening, sees Hans behind the bush, they both react together but the veteran Hans is faster, BOOM – BOOM – BOOM goes his shotgun, 6 – 5 -5 are thrown. 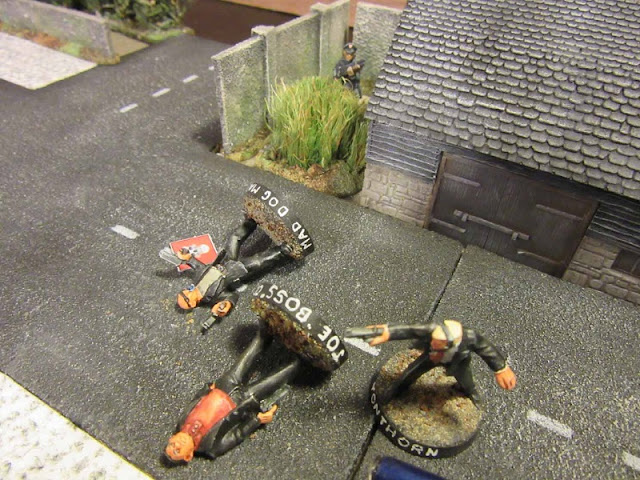 Turn 3 – Mad Dog goes down OOF and the Boss not badly hurt falls stunned and Erik the 3rd target is missed by a fraction of an inch. Erik passes his tests for man down, leader lost and received fire and blazes away at Hans, 2 shots – 2 misses, obviously rattled by the shotgun pellets passing so close. Hans ducks back behind the barn.

Turn 4 The Boss and Erik fail to activate. Hans recovers from ducking back – pops his head round the corner of the barn and Erik wins the resulting in sight test and shoots him, Hans falls to the ground stunned. “Ha not so clever now are” we shouts Erik. 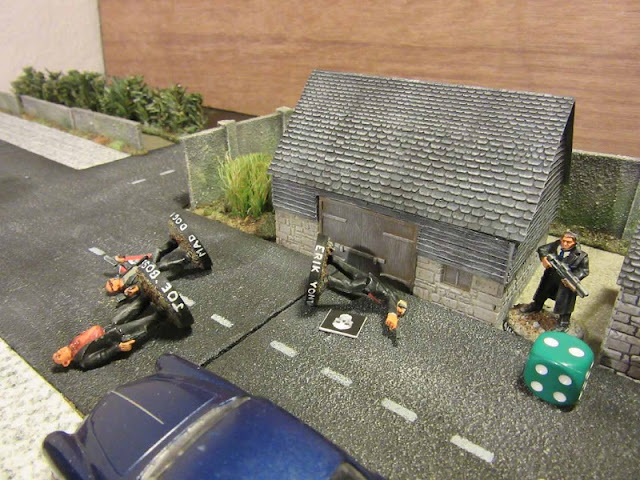 Turn 4 – Andy comes round the other side of the Barn and lets fly BOOM – BOOM – BOOM, hits Erik 3 times and he is down and OD (obviously dead). “Oh yes we are” says Andy. Sorry about the dice in the photo. 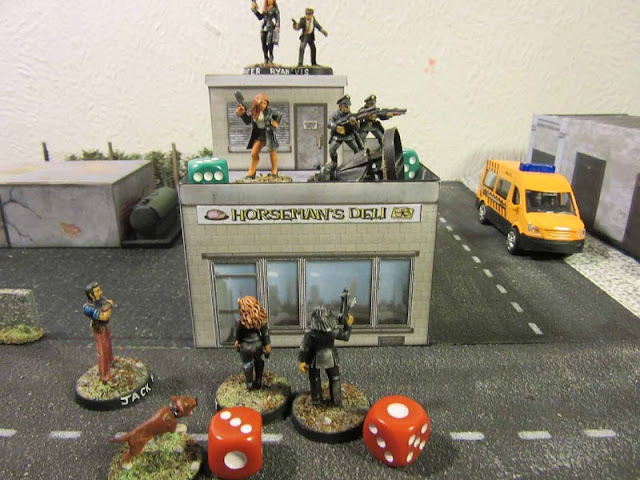 Turn 4 – Over by the Deli things are hoting up as well. Willhelm is fixing his gun but Sam and James come to the front window of the Deli and this resolves the 3 encounter markers there. Jack Handsome a passer by, an angry dog and Alexander Lorne the leader of the Uranium gang and Raoul, they had been on their way across the road to the bar when the shooting started in the Deli behind them. Through the window Sam recognised Alex from her photo fit and the 2 girls snap fired simultaneously Alex missed but Sam the better markswoman did not and Alex falls to the ground OOF, James and Raoul also fire simultaneously Raoul misses, and James who is a shit shot also misses.
This is the 2nd shot with dice on the board and you will be pleased to hear that the continuity girl has been fired. 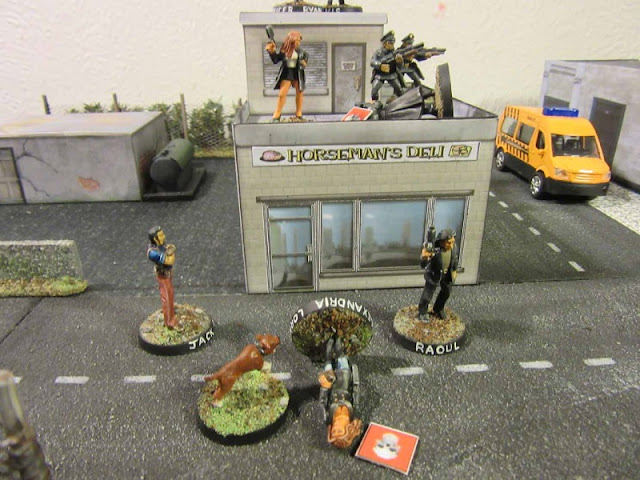 Turn 4 – Alex down, Raoul tests morale - fails and runs. He gets part way down the street when James gets a 2nd shot at him and this time scores a hit – just stunned though and Raoul is down for 1 turn. 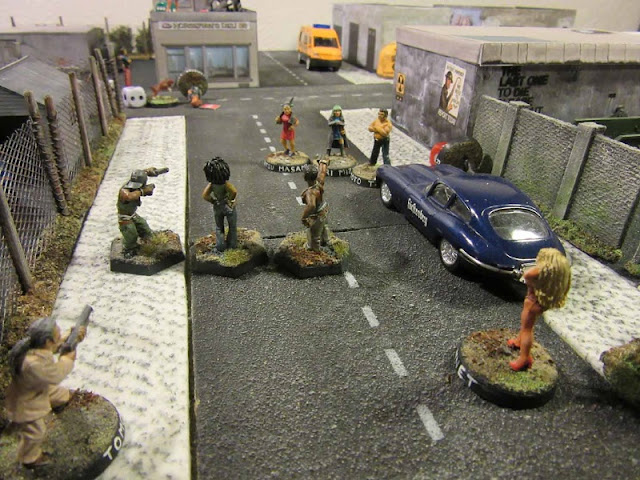 Turn 5 – Sam can see down the street and so resolves a PEF and 3 encounter markers. The encounter was Charlene with Rufus and Desmond the Gangstas (no type casting in my games you notice), they have run in to the Yakuza who are also after the uranium, obviously no love lost between these 2 gangs and they immediately set too. The other 2 encounters are Chardonet a good time girl on her way home (blonde on the right) and Tomari Daisuke, another Yakuza, (bottom left - pale suit). I am writing this AAR 2 weeks after the game and as there was no encounter marker for additional Yakuza I don’t know what the hell he is doing there, maybe in 10 years when the long term memory kicks in I'll be able to explain it.
Just behind the blue car you can see Raoul's base, this is where he got before being shot from the Deli, note he is just stunned and will get up next turn. 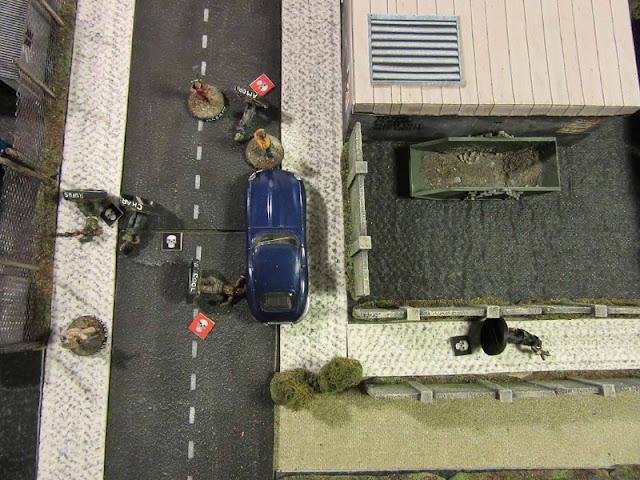 Turn 5 - Bullets, and shotgun pellets fly every where and when the dust dies down. Omari the yakuza girl with green hair lies OOF on the ground, but Charlene and Rufus are OD and Desmond is OOF, Yakuza 3 Gangsta 1. Raoul got up from behind the car and ran down the alley to the right, Tamori reacted like a rattlesnake and shot him dead. 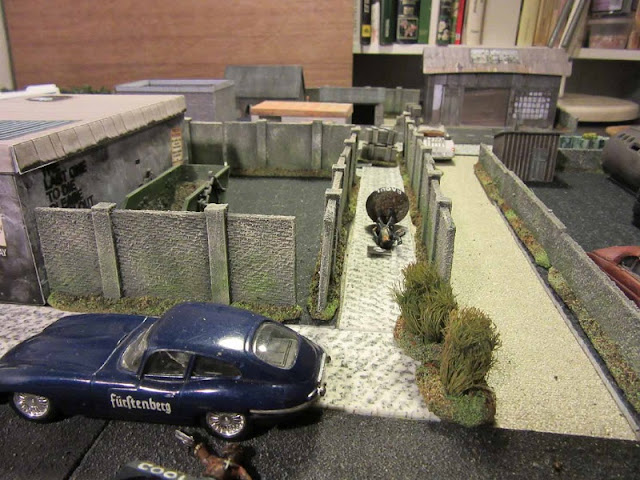 Raoul in the alley. Not his day. 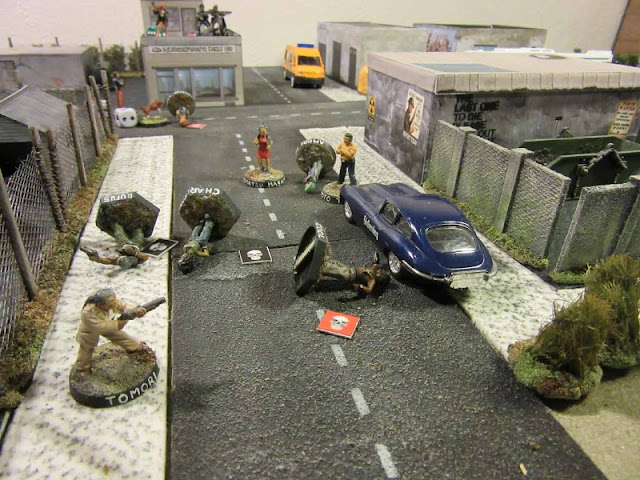 Over at the Deli, Sam and James have come outside to arrest Alex, the angry dog attacks Sam, she runs back inside and slams the door on its ravening jaws, James spins round and shoots it, the dog goes OOF. Jenny and Elvis – you remember them, upstairs at the Deli, well Jenny remains hiding upstairs but Elvis comes rushing down stairs, Sam reacts 1st fires and misses, Hans has now fixed his gun and he and Elvis fire together, Elvis wings Hans who falls stunned but Elvis is hit bad and is OD. 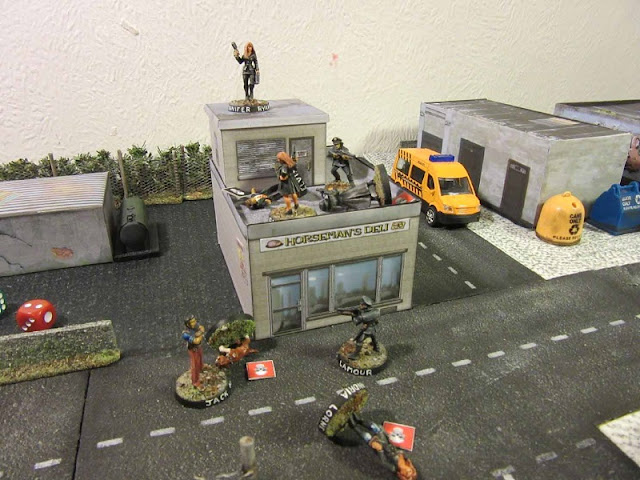 The Deli at the end of turn 5. 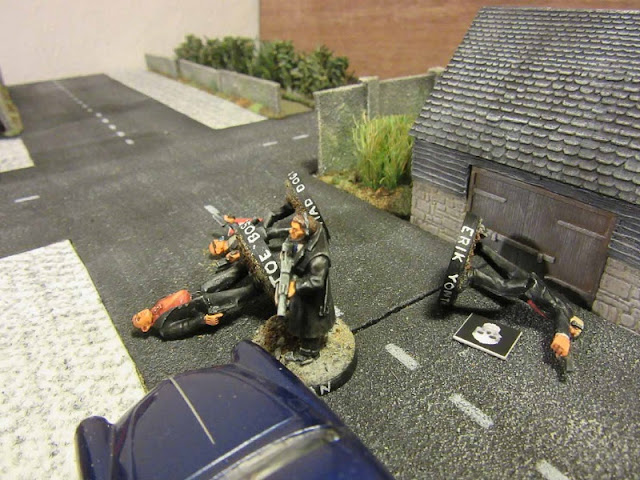 ﻿
Turn 5 – Andy Donovan strolls across the street and puts the cuffs on Boss.

Turn 6 – The Yakuza pick up Amori and start to move off the board. Jenny remains inactive upstairs at the Deli, the rest mill about. 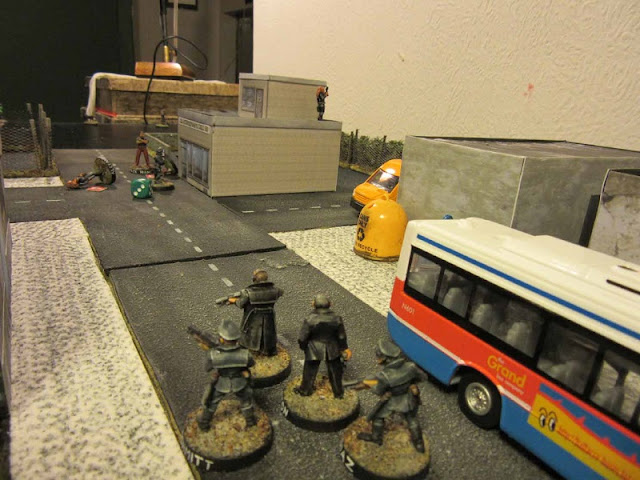 Turn 7 – Andy and cops escorting Boss down the street to the Deli see Jenny on the roof trying to make her getaway.
More dice - that continuity girl will never work in this car park again. 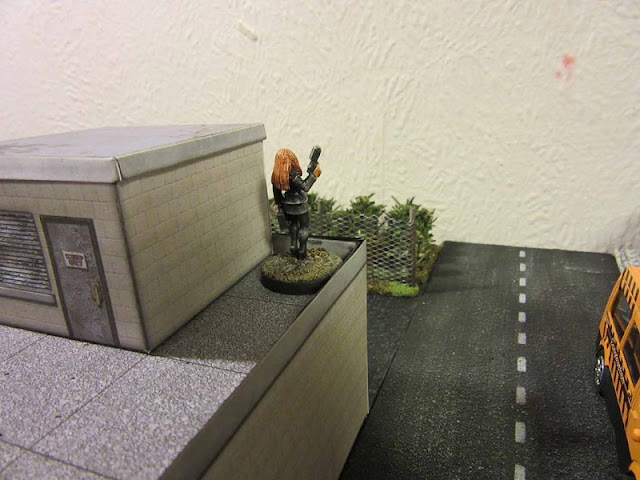 Turn 8 – they run over shouting “stop we are the law, give yourself up now” and she does. Does Judge Dread really say that?

A complete victory for the forces of law and order, there are a lot of bodies to explain but “That is why we have Special Agent Samantha Price with us” says Andy Donovan to his men, “That’s why she gets the big bucks”.

THE GOOD, THE BAD and THE UGLY – you choose. 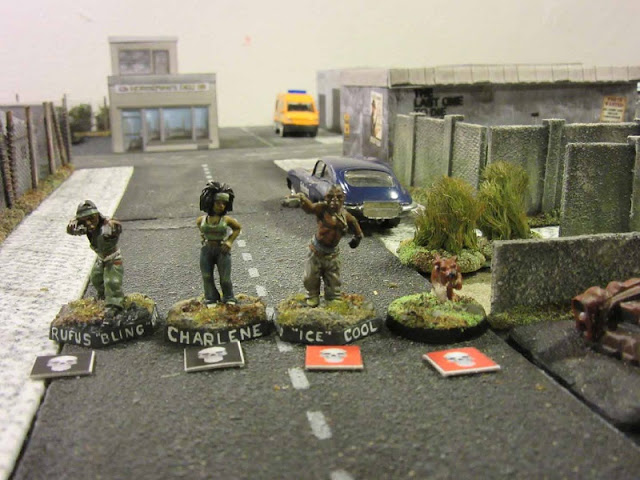 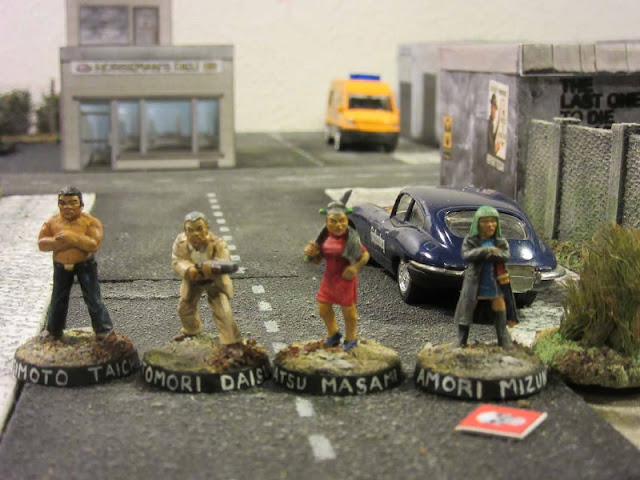 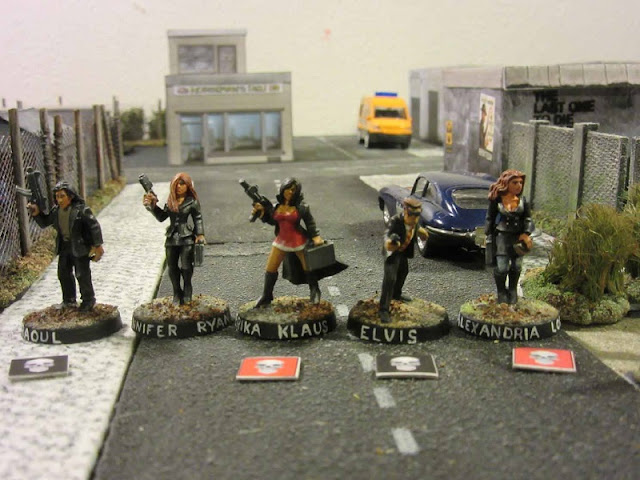 Alexandria Lorne and the Uranium Gang 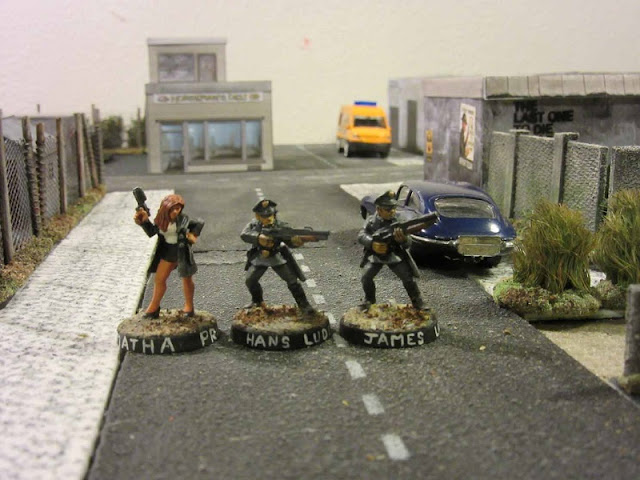 Samantha (Sam) Price and the B Team. 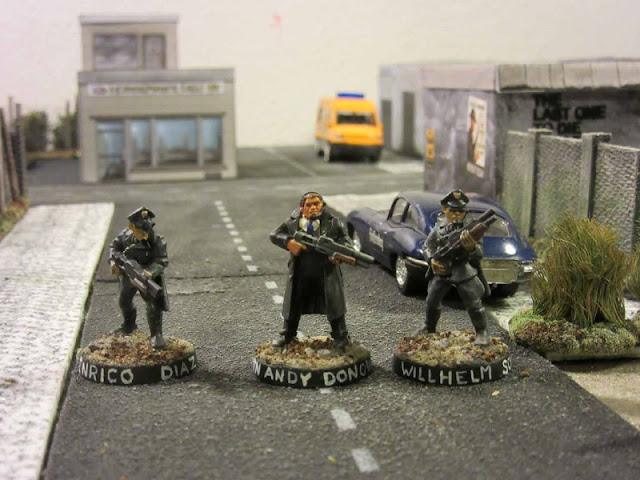 Andy Donovan and the A team. 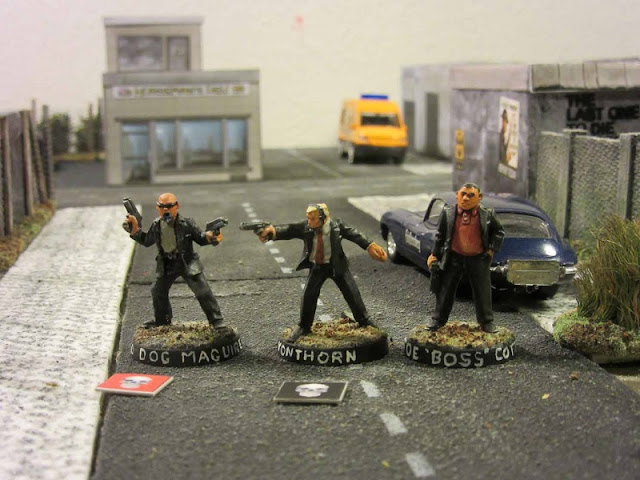 I really enjoyed the game, using the encounters and PEF’s meant that stuff was happening all the time and I couldn't predict it, I was lucky with the turn ups for the encounter markers they worked really well, with the team selling the uranium both being in the same area, the ones with the suitcases in the Deli and the other 2 outside on their way to the Bar, and then Boss Cotton being on the other side of the table but also on his way to the bar. If I hadn’t used random encounters and chance movement that is probably what I would have written in to the scenario.

The Gangstas and Yakuza being next to each other gave a good showdown but did not interfere in the main story. Jennifer nearly got away, the police failed a brains test to see if they would check upstairs, I guess with Elvis running down from there they must have thought it was clear, and only because Andy Donovan was bringing his prisoner along the street outside did they see her, also as I said earlier she is a bit of a coward and so hung around for a turn having failed to jump from the roof, not sure I blame her for that though.

Well if you’re still here – thanks for reading.
Posted by Vagabond at 10:23

Email ThisBlogThis!Share to TwitterShare to FacebookShare to Pinterest
Labels: AAR