In spite of the company of Ichi his favourite Geisha, Fukushima Masanuri is growing restless at the delays in the negotiations to secure his release. 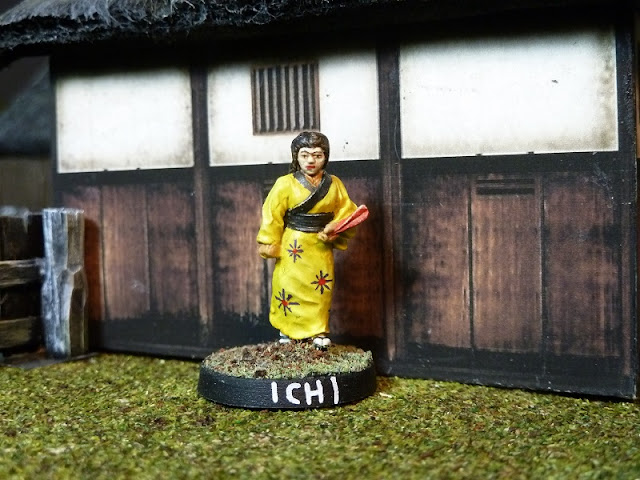 He has been held as a guest of honour at the small village where he was captured a month before and is beginning to question the loyalty of Matsuki Hiroto his right hand man.
Matsuki is not the brightest star in the sky and he has decided that rather than pay for the release of his Lord it would be better to effect a rescue that would bring much honour and renown on himself and save vast sums of money which he would hope to share in.
He hasn’t really considered the outcome should this plan go awry. 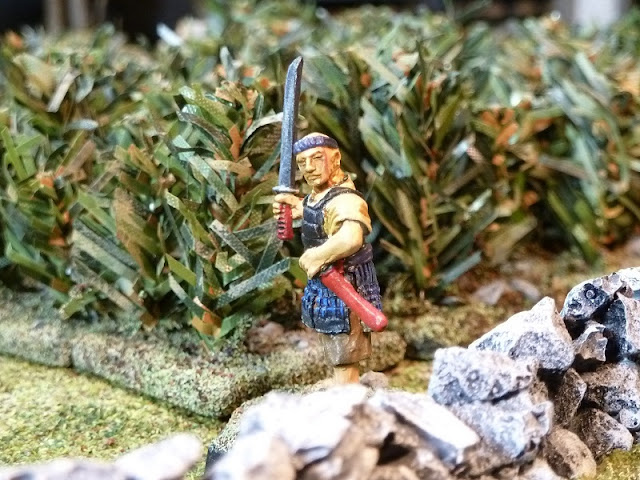 Inori the village headman in his finery, proud and bold before his fall from grace.
Some time ago there was a story of Inori’s attempt to win the favour of his Lord, Hirano Nagayasu and also the hand of the girl next door Kami. 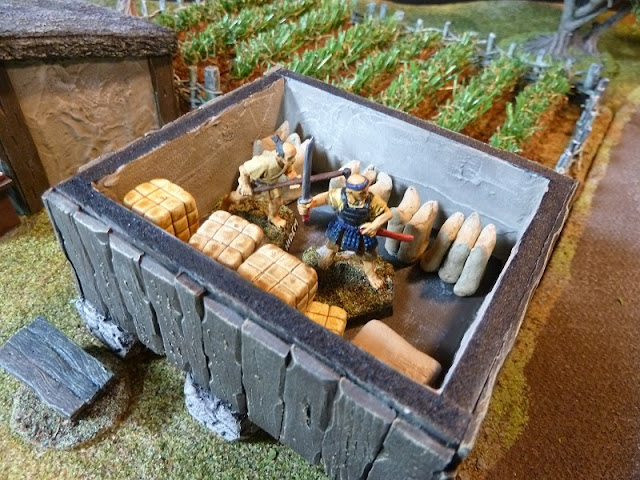 Neither of these was entirely successful, he didn’t lose his head which was one option Lord Hirano had considered, nor did he win the hand of Kami, but he did retained his position as the village head although now he sleeps in the storehouse until this mess is sorted out.
He is grateful Hirano decided the pigs needed their sty otherwise that might be his current sleeping quarters.
Hirano does not want the world to know he can’t maintain control of his retainers and so to avoid loosing face has accepted the situation, but perhaps he’s just biding his time.
Maybe Matsuki should heed the lesson to be learned from Inori's fall from grace, although I'm not sure he was in grace in the first place. 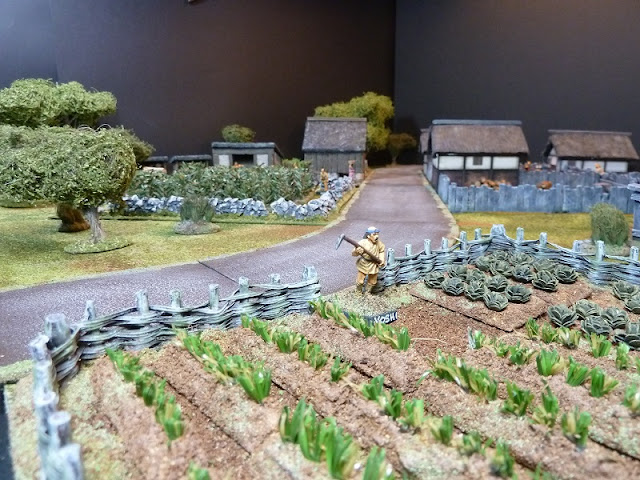 A view of Inori’s village from the south side. 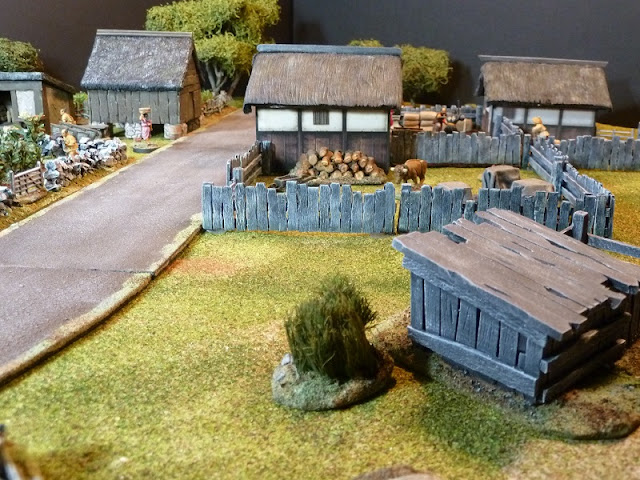 Bottom right Inori’s alternative home the pig sty and far left his current one the grain store, the centre hut used to be his accommodation, a fine place as befits a Headman.
This is now occupied by the captive Samurai Lord, Fukushima Masanuri and his Geisha Ichi. 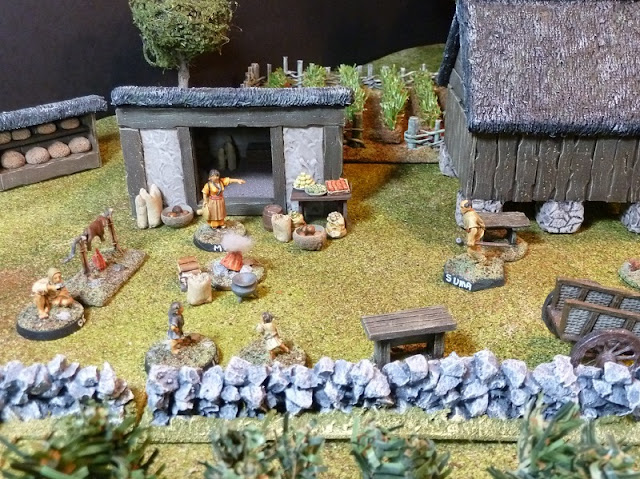 A typical evening scene in the village, happy families, Mate, poor woman has her fire out of control, the kids out of control, and the men folk have started drinking when they should be turning the spit. Does nothing ever change? 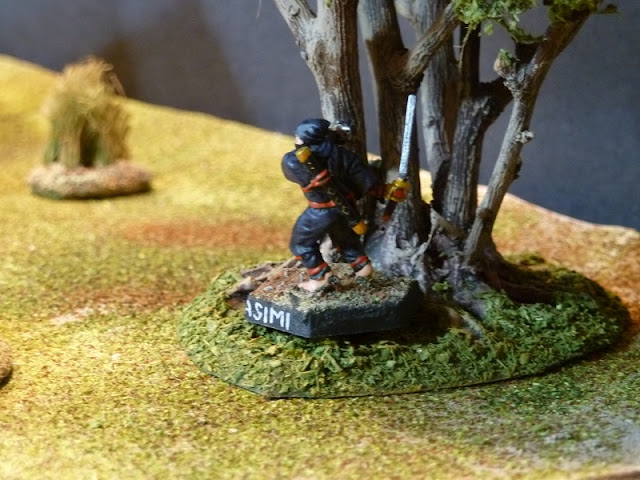 There’s a dark shape by the tree. - The village is under surveillance.
I told you Matsuki had a plan, quite a simple plan really, he’s paid a Shinobi warrior to reconnoitre the village and provide detailed information so that Matsuki can release his Lord and get the reward due to a man of his intelligence and stature.
He is quite a small man with limited intelligence so the reward might not be all he hoped for.
The Shinobi is checking the movements in the village to see if this rescue is possible. 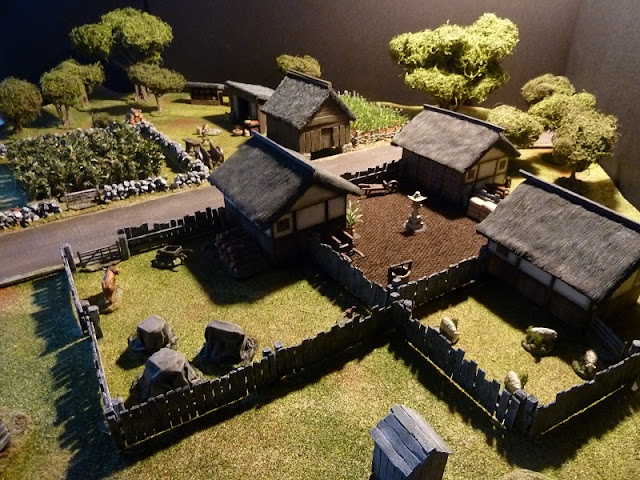 Night falls and the village is quiet. 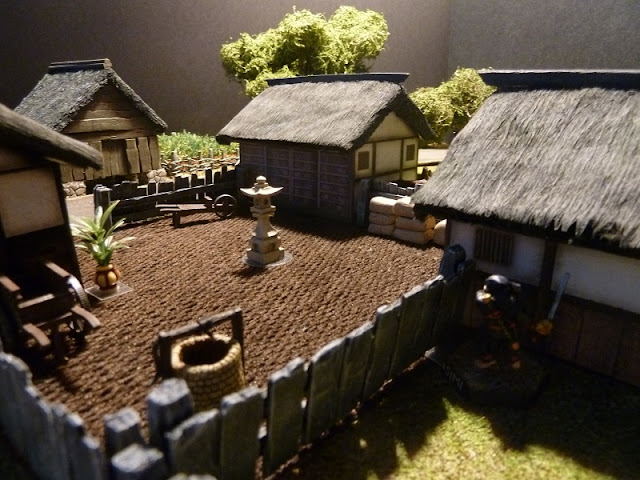 The Shinobi moves down into the village, but there is a problem. 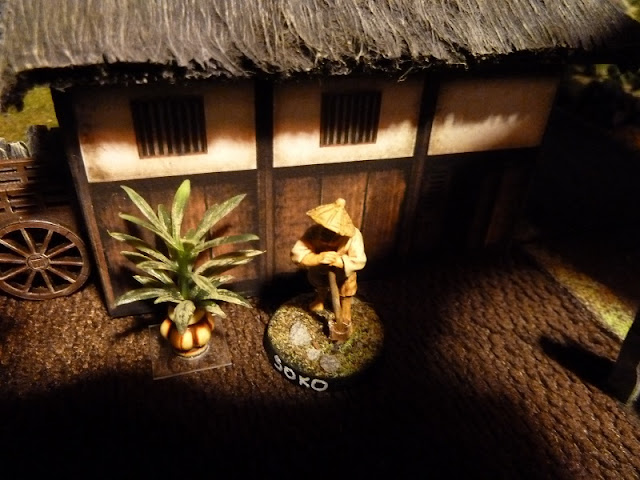 A guard on the door, he doesn’t look very awake, leaning on his spade like that, but the Shinobi can’t take chances.
He watches and waits in the shadows. Soko the guard - guards, - the light in the lantern burns out, that is the signal that his shift is done, he re-lights the lantern and goes to wake the next man on the rota. 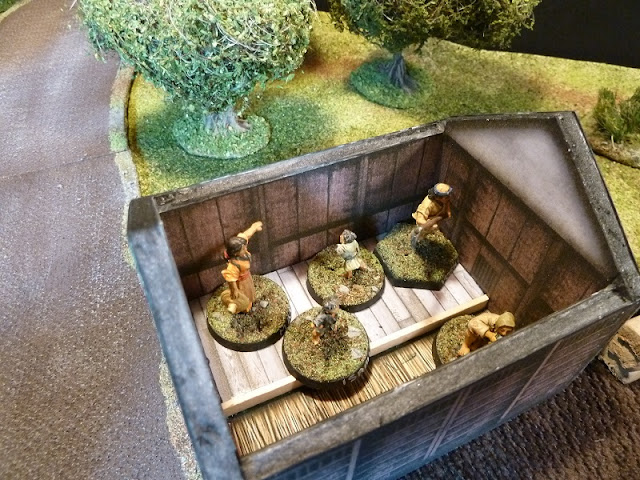 Yoshiie is not happy to be woken for the next shift but even less happy when Soko slides into his still warm bed. Accommodation is tight in the village since the influx of prisoners and guards, so every bed is valuable.
This routine occurs twice and the next time this changing of the guard happens the Shinobi is ready, he has a short time to wake Fukushima Masanuri to discuss a plan. 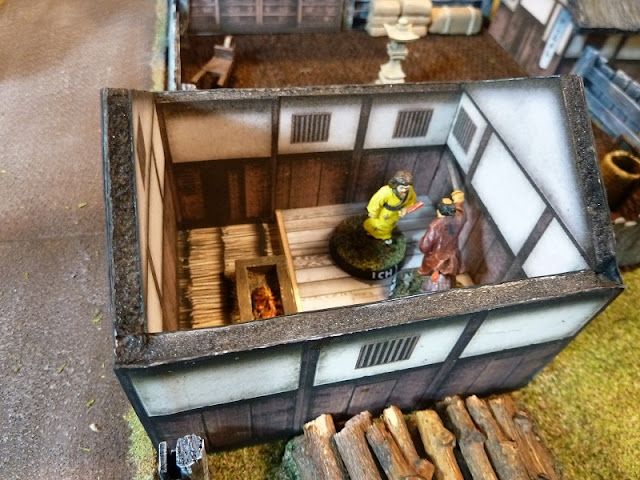 The door is locked by a hinged bar on the outside, so it’s easy for the Shinobi to get in, however there’s another complication, Fukushima explains that when he goes to bed he is chained to the wall just like he is now, this chain is not unlocked until they break fast in the morning. This puts paid to the obvious ploy of making a run for it in the night, they will have to come up with another plan.
Time is up, he goes back outside and quietly closes the door, puts the bar back into place and then hears the new guard coming on duty and so slinks away into the night.
The following morning the Shinobi watches the routine. Inori comes and wakes Fukushima, Ichi then fetches his breakfast, they eat together and the days activity starts. 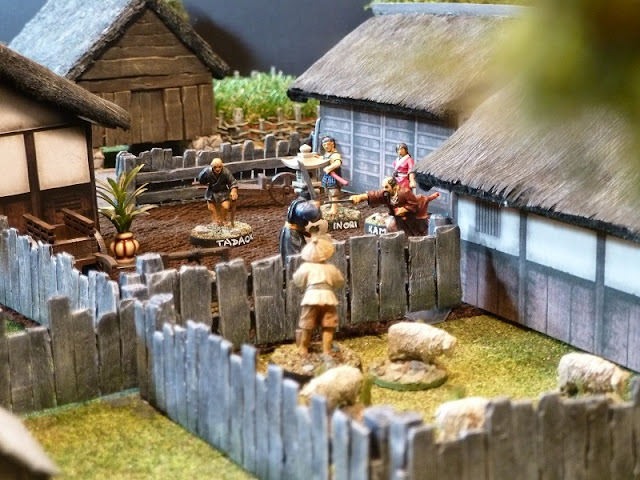 This is the view the Shinobi has from high in the tree the following morning.
Fukushima has demanded exercise and weapon practice and so Katagiri Katsumoto who is acting as his gaoler must humour him and besides you never know when you might need a new lord and protector.
He is under strict instructions not to injure Fukushima in anyway, unless he tries to escape in which case he must kill him, so they perform their practice using wooden staves painted to look like weapons. 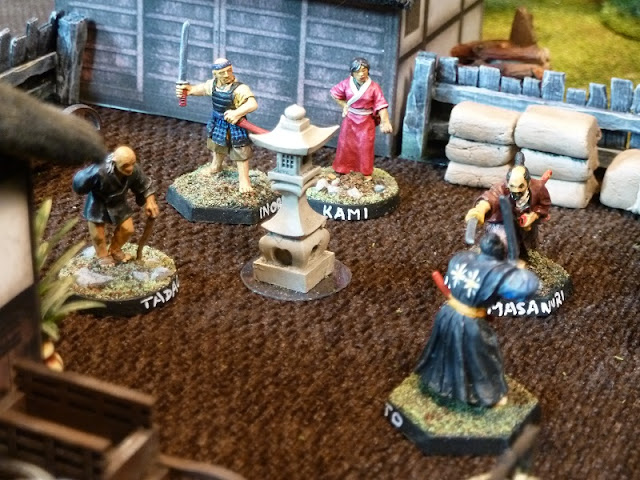 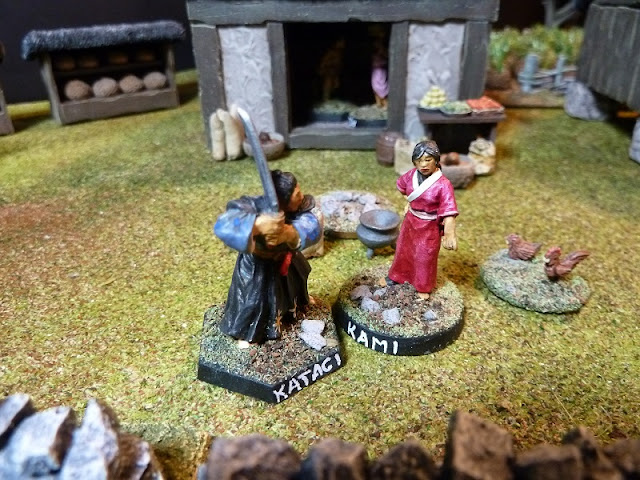 After the practice Katagiri is showing Kami his fine weapon and demurely she admires it.
The Shinobi thinks about the problem he has, and devises a cunning plan, but for now he slips away to report back to Matsuki that there is only one Samurai and a few villagers to deal with, unfortunately while he is gone the situation changes.
So far so good as the falling man said, the game is played, I just need to write it up, which as anyone reading knows is harder than it sounds.
Thanks for reading the first instalment, hopefully you'll read the next.