Time moves on - the Shinobi is back in his tree and a plan has been agreed with Matsuki. The Shinobi will enter the prison house during the night and hide in the rafters of the building. In the morning when Fukushima is unchained and Ichi goes for his breakfast, Matsuki will lead a picked band of warriors to rescue Fukushima, the Shinobi will then prevent any enemy from entering the house and dismembering Fukushima before they arrive. 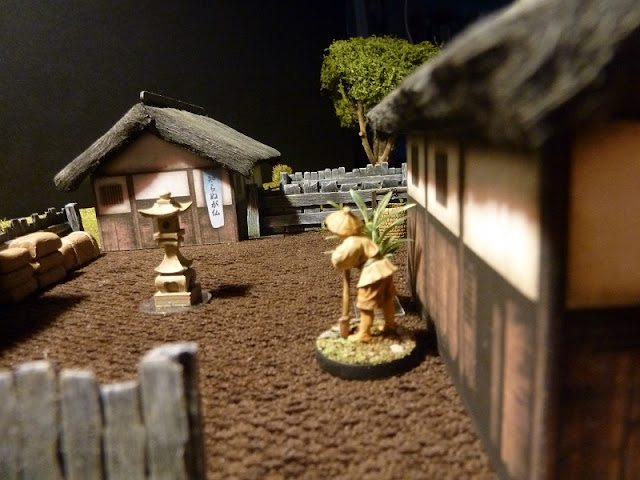 Dark falls again and Soko is back on guard, gazing hopefully at the lantern, waiting for it to go out so he can climb into Yoshiie’s warm bed. The hut at the end of the village has been commandeered by Katagiri, the Samurai in charge of guarding Fukushima. 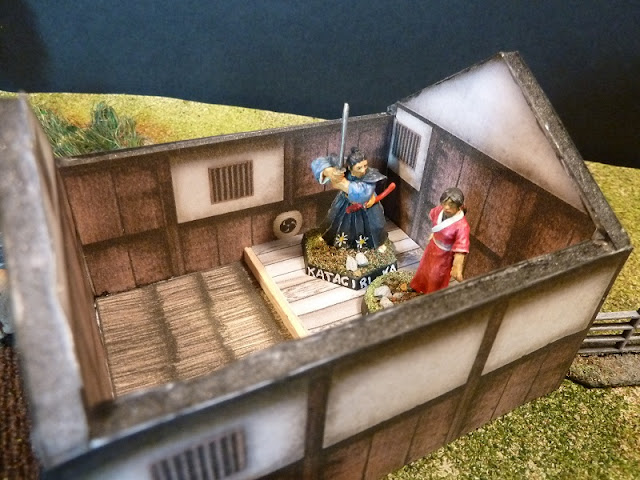 He seems to have had more success with Kami than Inori did.

The night passes and as the guards change the Shinobi moves stealthily into the village, he easily enters the hut that is acting as the prison and has devised a clever way of replacing the bar on the door so that no one knows he is inside.

The bar is hinged at one end and drops into a bracket at the other, by slipping a loop of line around the opening end Ichi who is inside can put her arm through the window and hold the line, keeping the bar open and then when the Shinobi is inside they can lower the bar into the bracket and slip the line pulling it inside. No one can see the bar has been tampered with and the only downside is they are all imprisoned. 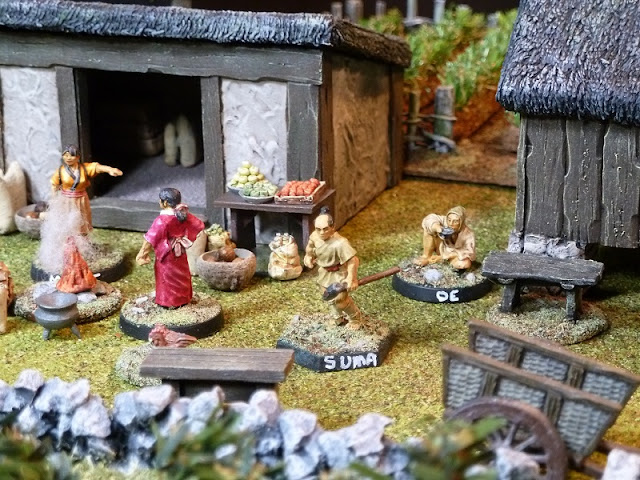 Morning has arrived, Mate has sent the children off with the water carrier, peace reigns around the cooking area, Oe takes his first sip of Rice wine and greets the day. 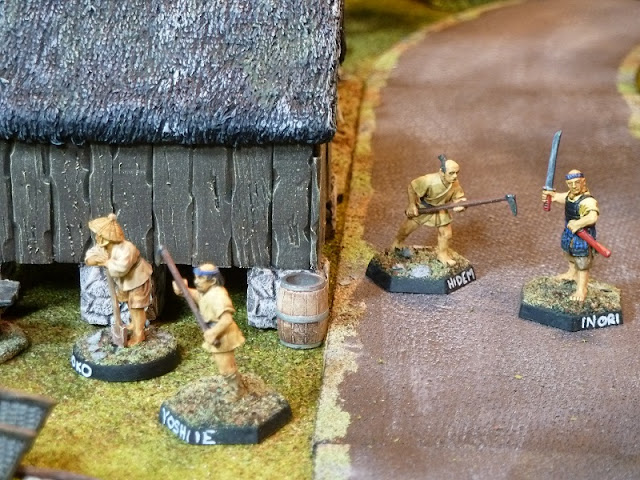 Inori emerges from the warehouse with Hidemoto, before anyone asks, they are only sleeping together for convenience. 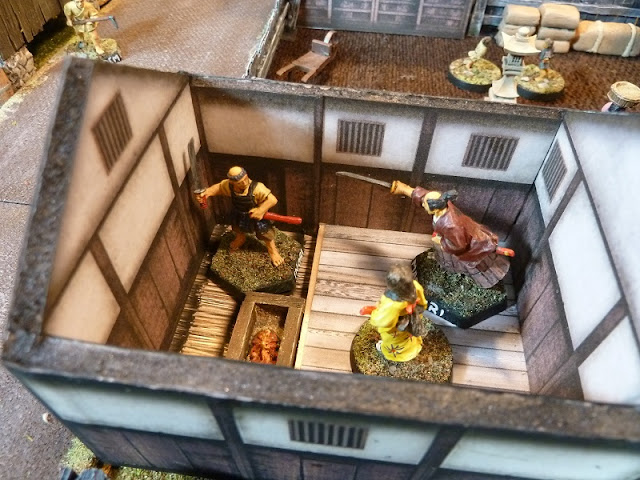 He makes his way over to the prison hut and unchains Fukushima, he is completely unaware that there is an armed warrior 3ft above his head in the rafters. 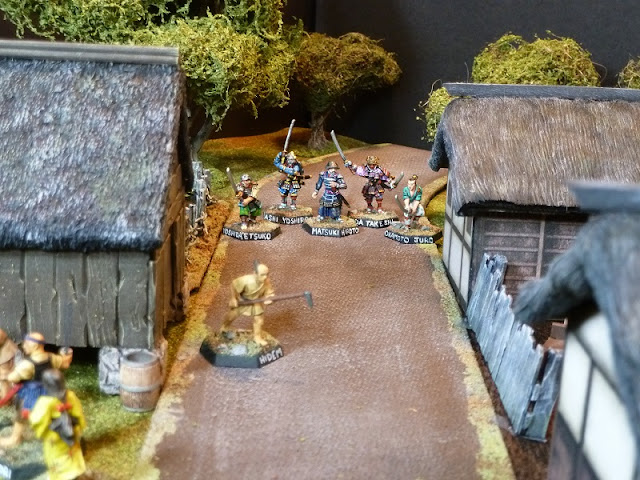 Seeing the bright yellow kimono of Ichi crossing the road, Matsuki and his band of trained killers start to move towards the prison hut, Hidemoto has his back to them and fails to detect they’re there. 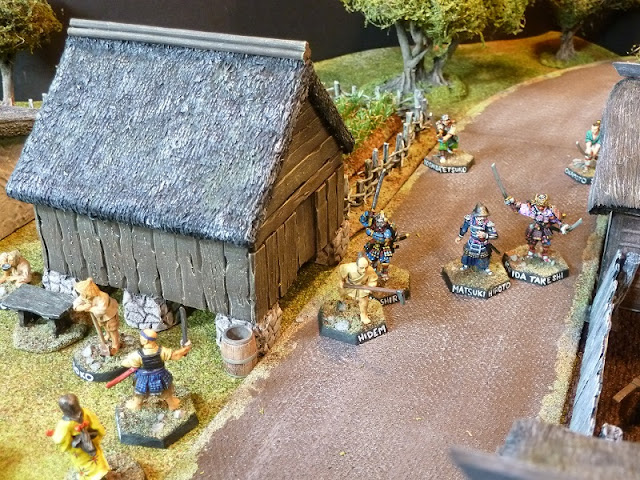 Matsuki has instructed the two Ronin to remain behind and guard the road, they are to stop anyone escaping from the village and raising the alarm. He believes that there is only one Samurai to deal with, who will almost certainly be un-armoured and will be no match for three heavily armoured opponents. He does not expect any resistance from the villagers, they will be cut down like rice in the field. 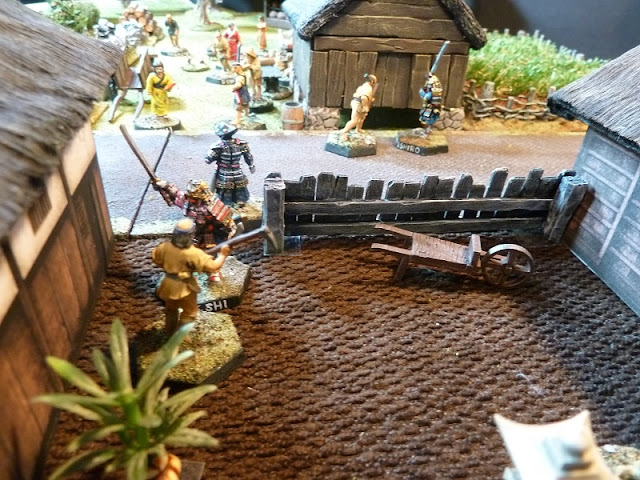 Hidemoto finally hears a noise behind him and turns, it is too late for him to run or he was too brave to run but he raises his garden hoe to defend himself against the long Nodachi of the famed samurai warrior Kobayashi Yoshiro. On this side of the road Yoshiie is on guard and surprisingly he stands his ground when charged by the fearsome figure of Ishida Takeshi. The alarm is raised and everyone is alerted to the presence of the intruders. 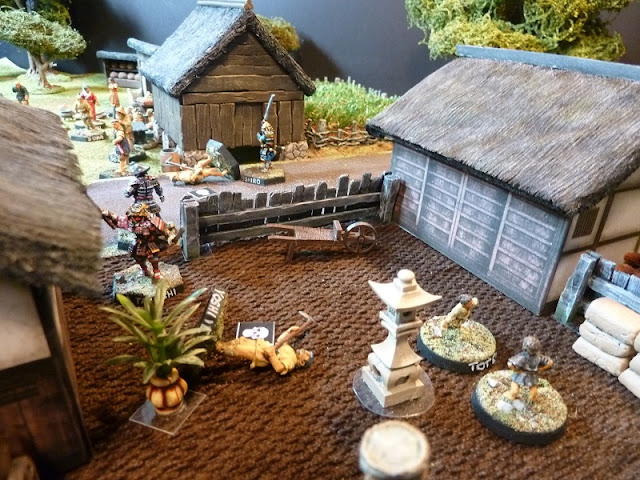 The fighting is swift and deadly, deadly for the villagers they are both killed at a stroke, well 2 strokes but that’s just being pedantic.

The village brats look on in horror as their relatives are cut down. 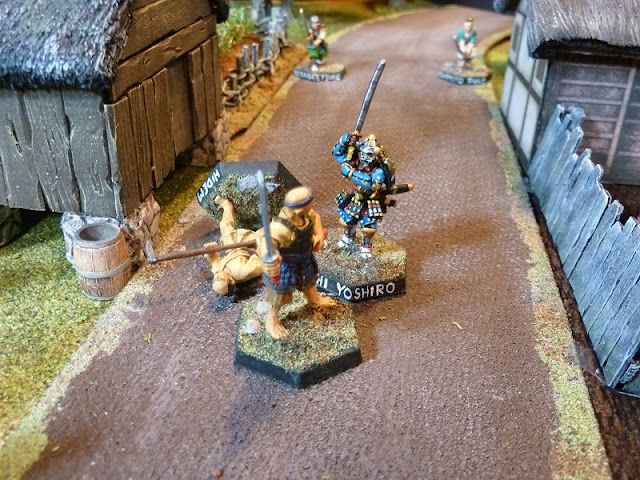 Inori knows he is not going to be forgiven a second mistake, he is responsible for keeping the prisoner secure and so against his better judgement he attacks Yoshiro. 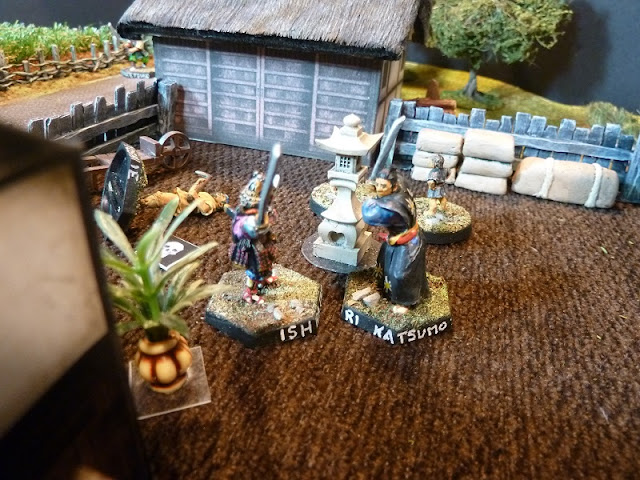 Katsumo hearing the commotion has grabbed his Katana and rushes straight at the victorious Takeshi, sure enough he didn’t have time to don his armour so he is at a major disadvantage. 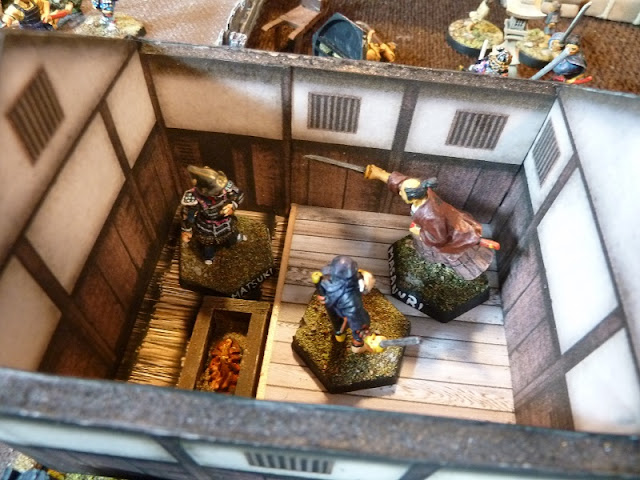 In the mean time Matsuki has entered the prison hut and is bowing low to his master the Lord Fukushima, the Shinobi has already dropped from the rafters and is prepared to leave, but etiquette has to be observed first. 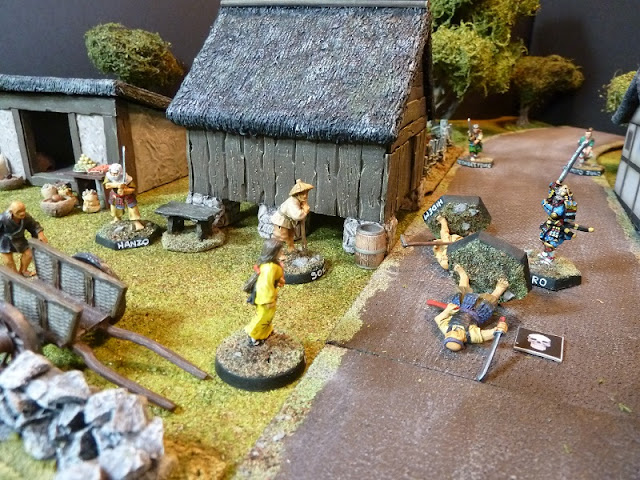 In spite of having some protection from his light armour Inori has been cut down quickly.

You might not have noticed so I’ll point it out, Oe the wine drinker has risen, and thrown off his old clothes to reveal he is the renowned swordsman Hanzo who is working for the Lord Hirano to ensure that Inori and Katsomoto obey his orders. 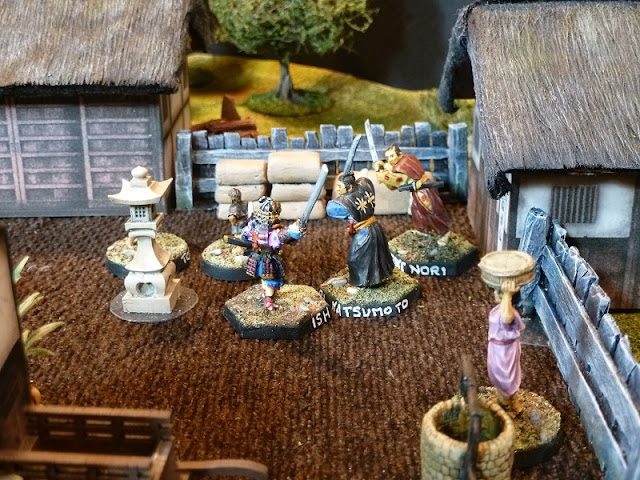 Katsumoto is fighting for his life and has been pushed back across the beaten earth of the village compound, but Katsua Takenori his friend emerges from the hut, this is a bit of a surprise to Takeshi he was only expecting one Samurai opponent.

The water woman shouts to the brats to stay out of the way, they might be young but they have enough sense to obey her.

I was hoping they would get in the way and trip one or other of the fighters to make it a bit more interesting. 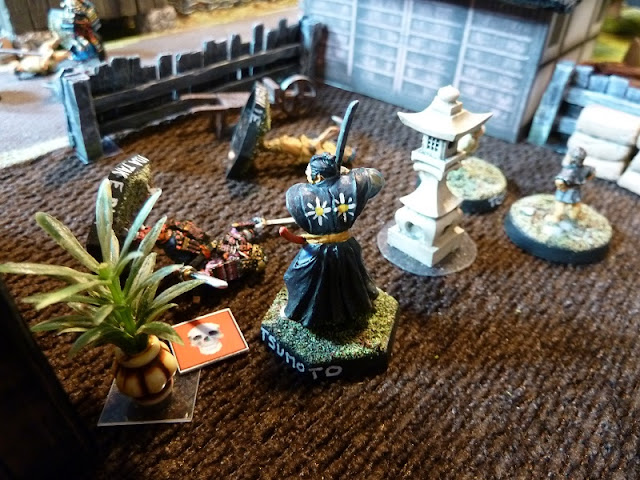 Katsumoto is a demon fighter, his attack is better than Takeshi’s defence and in spite of Takeshi’s armour he takes a bad wound that lay’s him low. The defenders are fighting back and wounding Takeshi is a major point in their favour.

In the prison hut, etiquette is still being observed. 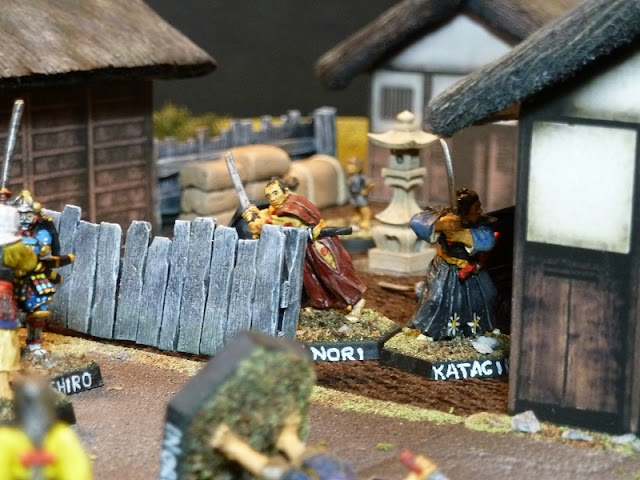 Katsumoto has reached the door of the hut and drops the locking bar in place, inside the hut, etiquette is still being observed. They failed to activate for 3 moves and now all three of them are prisoners.

Just in sight on the left Hanzo has attacked Yoshiro and beaten him back, pushing the fence over in the process and things are now starting to turn in the defenders favour. Yoshiro’s defence is much stronger than Hanzo’s attack, but sometimes lady luck is on your side. 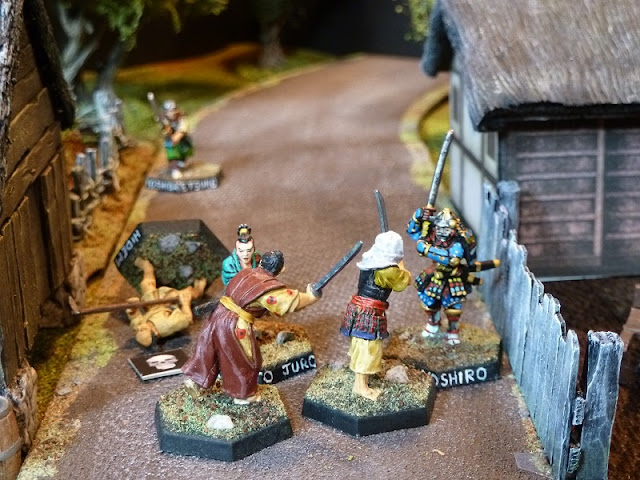 Yoshiro has shouted for the two Ronin to come and help, they were more afraid of disobeying Matsukis command that they didn’t obey at first but in the end decided one of them should go and the other stay and guard the road.

They’re turning out to be a right pair of Jobsworths.

There is a loud ringing of steel, blade on blade but Yoshiro has pushed off the fence and is fighting back against Hanzo’s attack, the fence relieved of the pressure flips upright again.

The Continuity Dept is going to get it in the neck if they don’t pull their finger out. 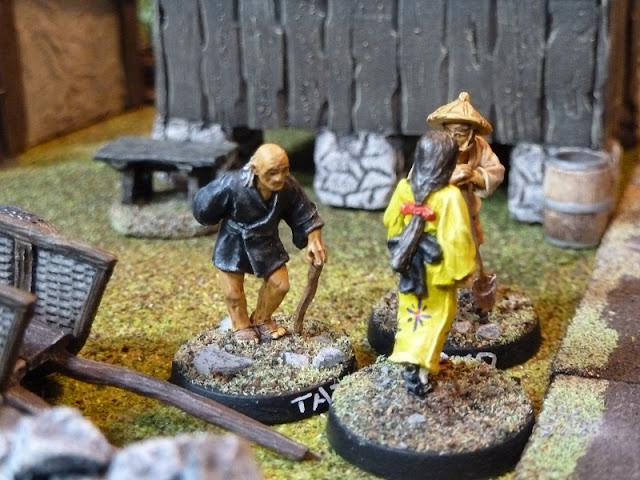 If you go back 5 or so photo’s you will see Ichi is behind the village defenders, I hadn’t really thought she would take part in the fight, after all she’s only a girl.
(Although if you’ve read many of my games, you will know the female is usually much more deadly than the male).

Anyway I hadn’t generated any stats for her but I decided she would help in the fight at least by pushing one of the enemy fighters off balance so I rolled for her stats. I’ve not got round to creating the full cards for these figures and so I’m only using Rep as a catchall, Brains, Guts, Constitution, Attack and Defence. As usual I used an average dice to roll stats and she got 4,5,5,5,5 and 5, high is good. So it turns out I was completely wrong when I said she was Fukushima Geisha, she was his bodyguard incognito, she kept that from me as well as everyone else.

OK no problem she will attack Takenori in the back, but she rolled 6 and 6, she needs 5 or less to attack, bugger that didn’t go well.

Soko sees the involuntary move she was about to make, he gets a rush of blood to the head and attacks her, his intention is to subdue her rather than hurt her.

Well he’s no fighter and she is, but he beats her with a quick smack to the head, she is stunned for a minute and in that time the old man joins in the fight. 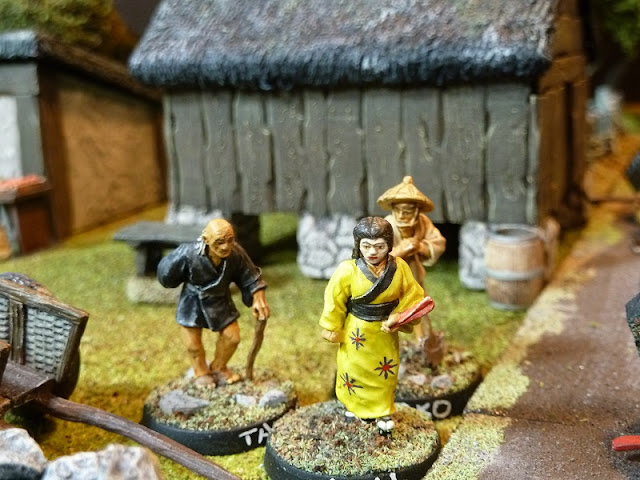 Together the two of them are stronger and manage to overpower the poor woman and tie her hands behind her back. 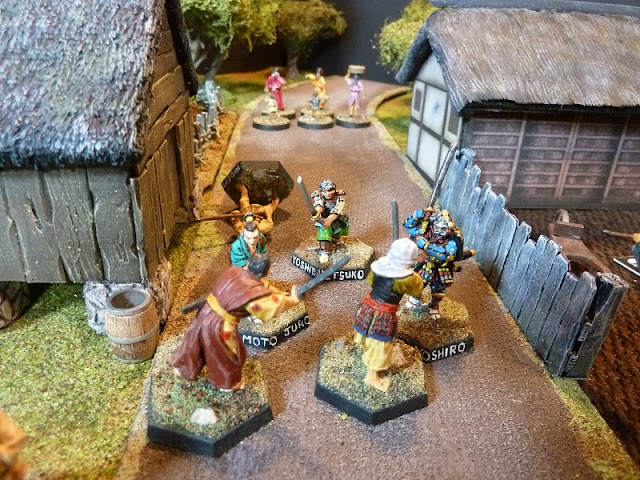 While that was going on the last Ronin had decided to abandon his post guarding the road and as you can see in the distance the village women are making a run to fetch help. Unfortunately with some bad dice rolls this is going to take a long time.

The fighting is starting to shift in favour of Yoshiro and Juro and our two hero’s are being pushed back as the final Ronin tries to get in the fight to help.

This is complicated by the fact that Yoshiro adhering to the Samurai code tells him to back off. 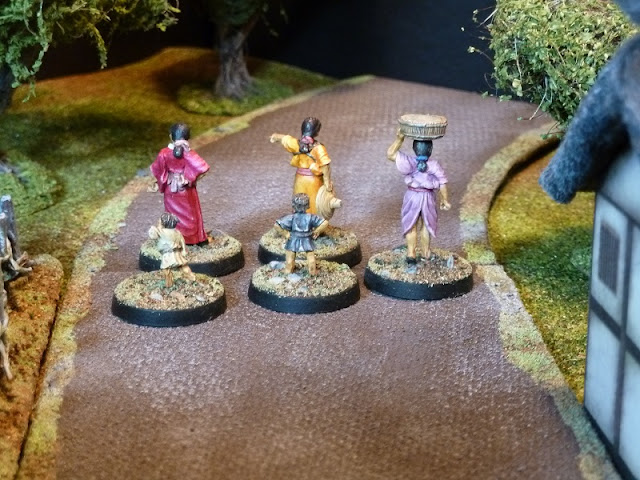 Quick close up of the fleeing womenfolk. 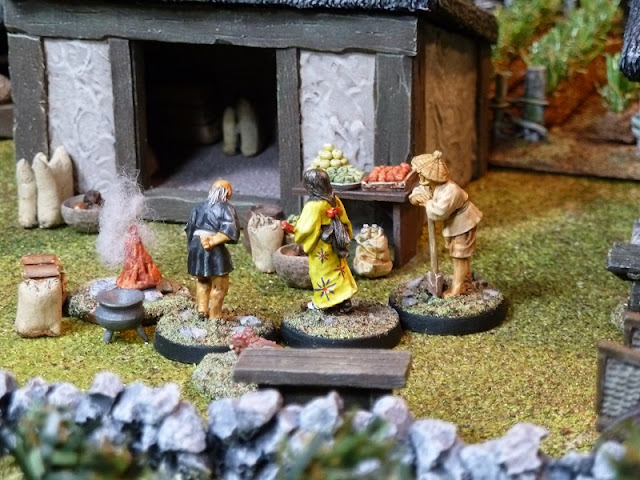 Ichi is being escorted away, hopefully not to a fate worse than death.

As they hadn’t invented TV she couldn’t be forced to watch 2 episodes of East Enders back to back, so it can’t be a fate worse than death can it. 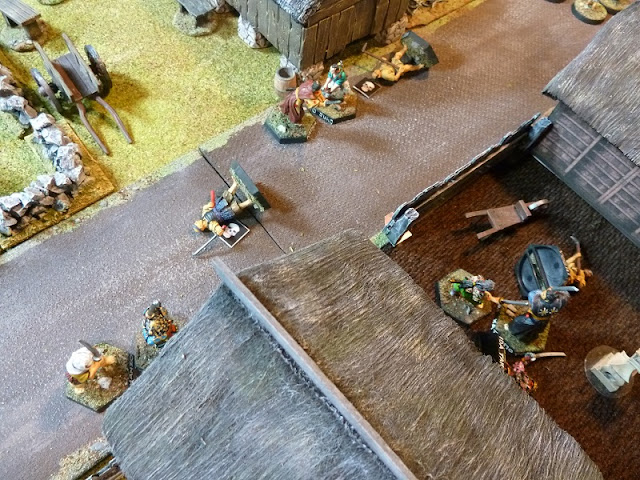 The fights went on and on and on, Hanzo bottom left is being pushed back and back and back, but every so often he revives and stops Yoshiro in his tracks but he can not defeat the armour of the Samurai.

The Ronin and Takenori top, are very evenly matched and the fight sways one way and then the other.

Katsumoto bottom right had decided to stand guard by the door and hold the prisoners in place but the second Ronin had attacked him and has forced him back away from the door. 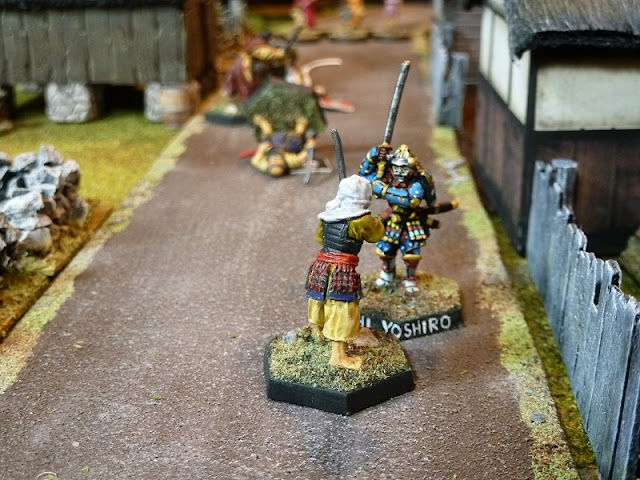 In the distance the Ronin Juro has finally been defeated, but Hanzo is still here fighting for his life. The problem was that they both have a blistering defence but a poor attack and Yoshiro’s armour meant that Hanzo could never get enough hits to inflict any damage.

Out of sight the other Ronin has also beaten Katsumoto, so we are still 2 on 2 with 3 locked up in the prison hut, it could go either way. 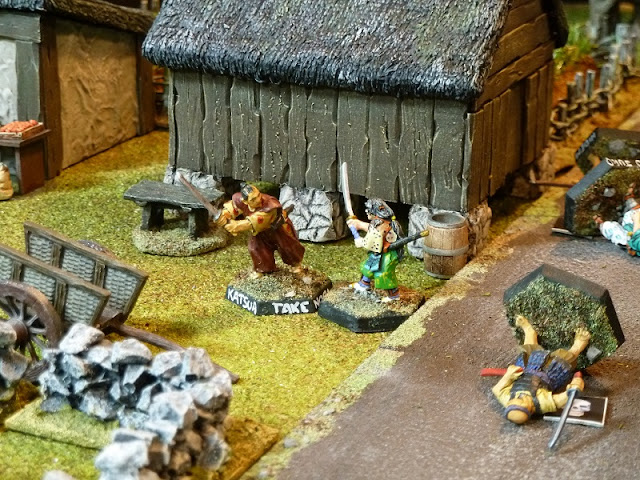 The Ronin rushes across the road and attacks Takenori. 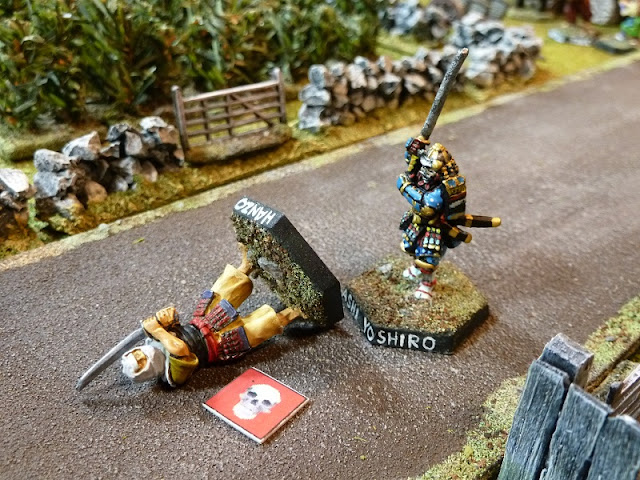 He turns and staggers up the road shouting for the Ronin to stand back, this is a fight for Samurai.

They are both tired but. 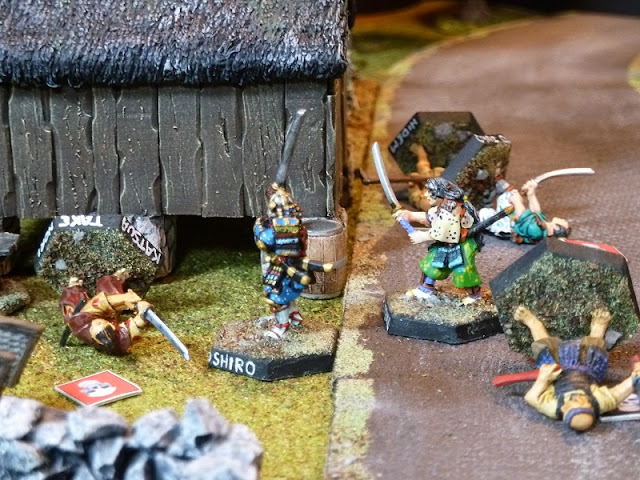 It’s over quickly and the interlopers are victorious.

All the villagers have disappeared there is no one left to fight, Yoshiro opens the locking bar and greets his lord Fukushima Masanuri. 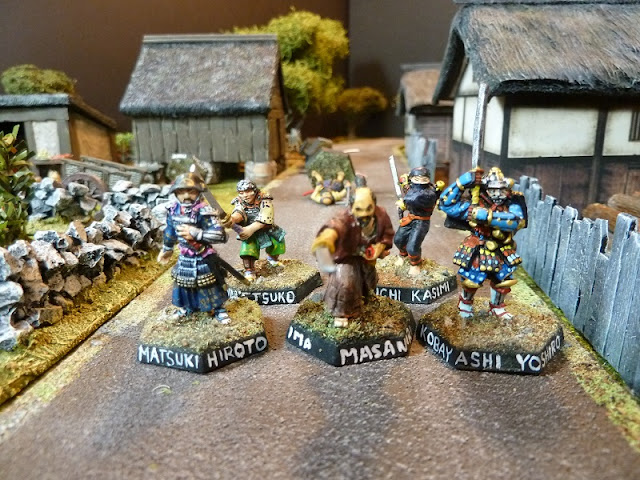 They can hear horns sounding and know that Hirano Nagaysu is coming with his retainers and so the remaining members of the Fukushima clan make haste to leave, but in a dignified manner.

Hirano arrives in the village and is greeted by the dead and wounded, there is no sign of his prisoner, the only good news is that the Geisha Ichi is still a captive of Soko.

Well that went this way, and then that, and then back again.


I realised I’d made it too difficult to hold the prisoner, but at that point Katsumoto locked the door taking out 3 fighters and so it swung back to quite an even game. Not sure where this goes now, will they declare all out war or call it a day, honour satisfied.


Well if you’re still here, thanks for reading and if you’ve any thoughts let me know.
Cheers.
Posted by Vagabond at 23:15