Horse meat for dinner - the Rock Ugly Clan certainly hope so, they have been on the track of this small herd for a while and are getting very hungry.

Having decided mammoth hunting requires a lot of effort, is dangerous and put's the health insurance premium up substantially they are going after food that is considerably less testing this time. 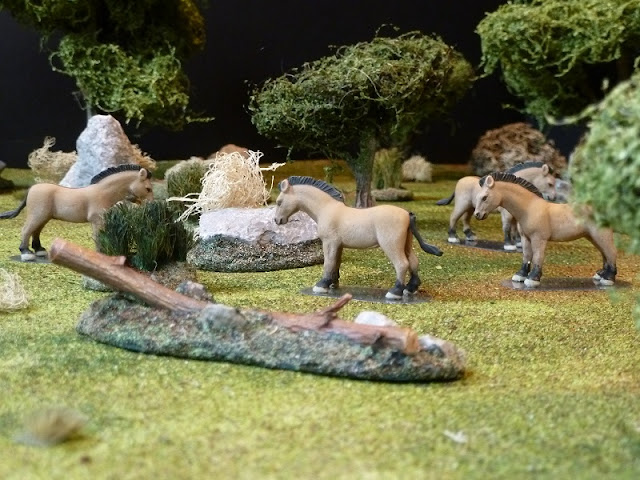 The horses have finally stopped moving and started grazing which gives the Clan a chance to carry out their most successful hunting technique. Bearing in mind what happened with their last successful? hunt.

They are using a hunting technique known as Beat, Beat, Stab, Stab, this involves getting hunters in a line in front of the prey and then have beaters Beat, Beat and drive the animals on to the ambushers who Stab, Stab. This usually results in a few broken bones and a full larder.

This technique has been passed down to us through countless millennia and is in current use, even today where it is known as grouse shooting in Scotland, boar hunting in Bulgaria and numerous other terms elsewhere.
So now you know how this form of hunting developed, it's not because the aristocracy are too lazy to chase the damn birds after all, hummm maybe it is!!! 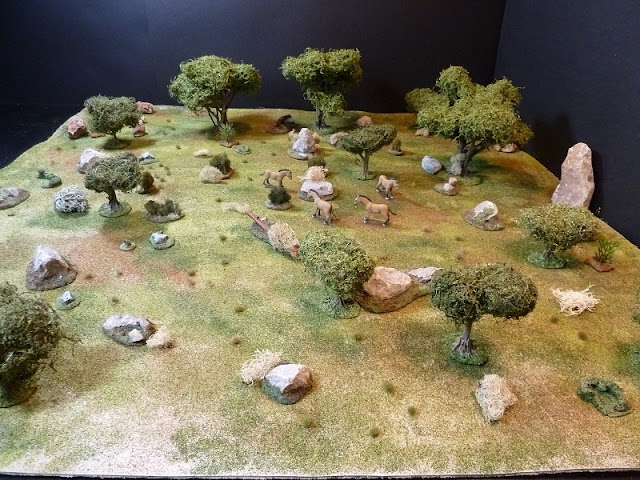 The overall view of the immediate landscape surrounding the herd, the wind is blowing from the East, that’s the right hand side of the table to most of us and the clan is over in the north east, that's the far right hand corner, out of sight of us and the horses. 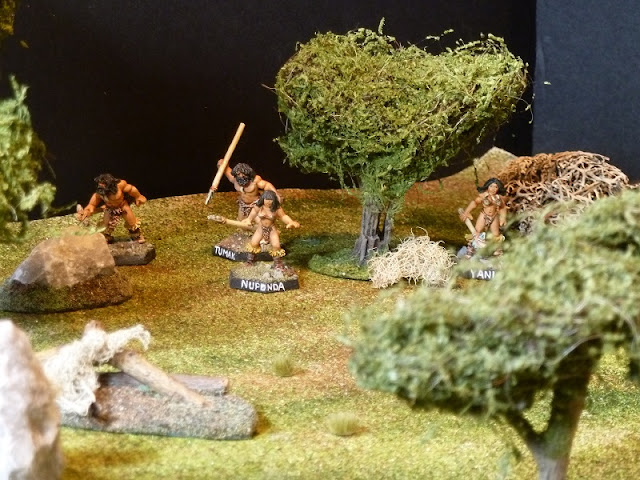 The plan is for Yani the female on the right to wait, until the rest of the clan get into position and for her to move upwind of the herd and push them slowly to the ambush. She doesn't want to stampede the prey or they will go straight past the hunters and tonight's meal will be dried Mammoth meat from the last hunt and the whole clan is getting a bit weary of it.

I believe Yani has no concept of counting time and so without measuring I estimated 6 turns for the hunters to get into their ambush position, they have to move quite a distance and to do it stealthily. 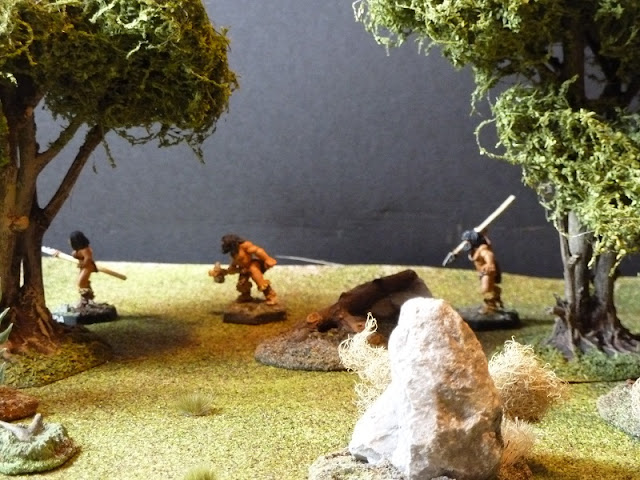 The ambushers set off, led by Nuponda the other female, she gained the Alert trait after the last game, in which the two blokes were a bit of a liability.

Just to add a bit of spice to the proceedings each turn I also rolled 2D6 die and on the 3rd roll of a 7 carnivores would arrive, they could be wolves or cave lions depending on a die roll and arriving in a random placement on the board edge.

Turn 1 - Tumak one of the males tripped, he is the one with the wounded leg from the last game. The horses realised he was a hopeless hunter and not to be feared so they carried on grazing.

Turn 2 - Akoba the other male stepped on a twig with a loud snapping noise, again the horses didn’t react.
At this point the ambushing hunters were getting spread out, mainly due to the clumsy, noisy, males failing activations, causing a racket and falling behind Nuponda - the graceful and quiet female. Yes the one with the nasty disfiguring scar. 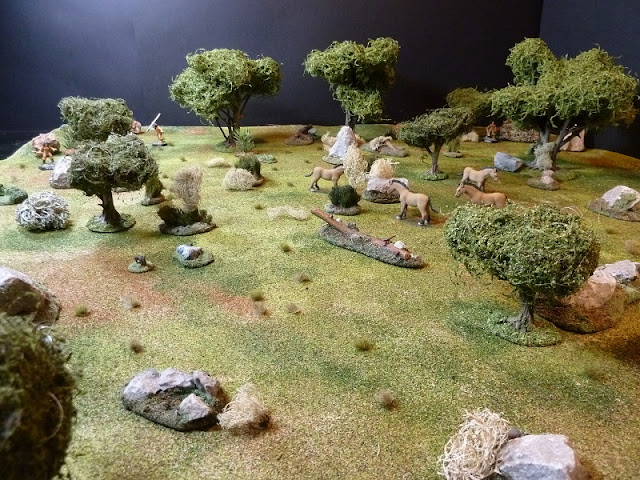 Turn 3 and 4 - All went well and the ambushers were getting close to their positions. Yani remained in her place, counting sheep for want of a watch.

She started to move on turn 5 so not bad for someone who probably can’t count or tell the time. She needs to move a little way south so that the wind will carry her scent to the herd and hopefully get them to move away from her towards the line of ambushers. 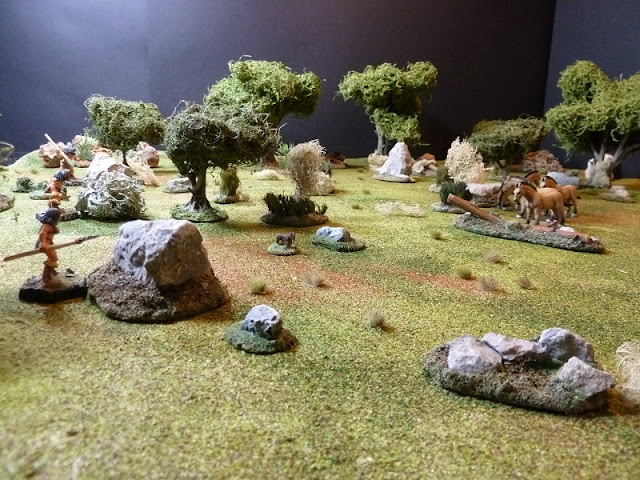 Turn 7 - They are all in place and Yani is now upwind of the horses. I counted this as 2 failed activations in the rules which cause 2 horses to react and they both moved away from her and towards the ambush. I love it when a plan comes together. 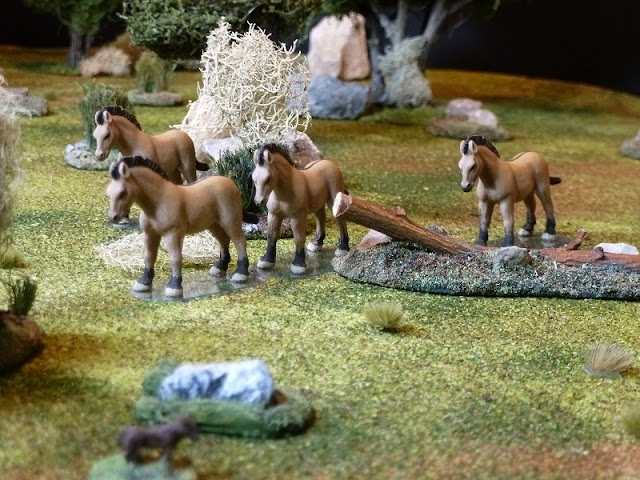 Turn 8 and 9 - The horses are gradually moving away from Yani but in a leisurely manner. 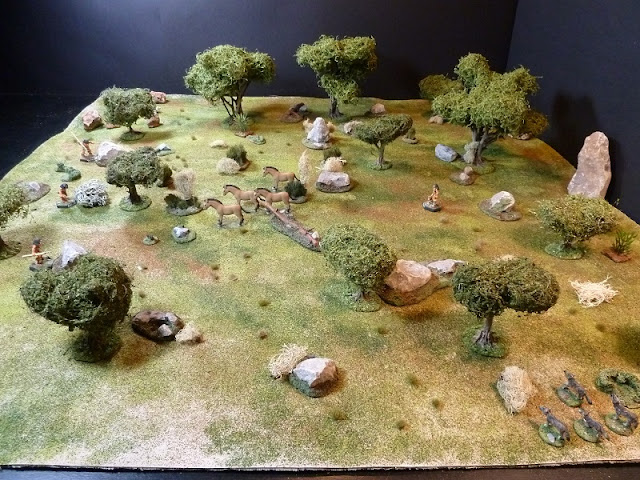 Turn 10 - The final 7 was thrown and the carnivores arrived – a small pack of 4 wolves. You can see Yani centre right slowly moving the herd off to the west and hopefully you can see the ambush line.

Turn 11 - The wolves see Yani and howl, this makes the horses nervous and they move directly away from the wolves and so no closer to the ambush line. 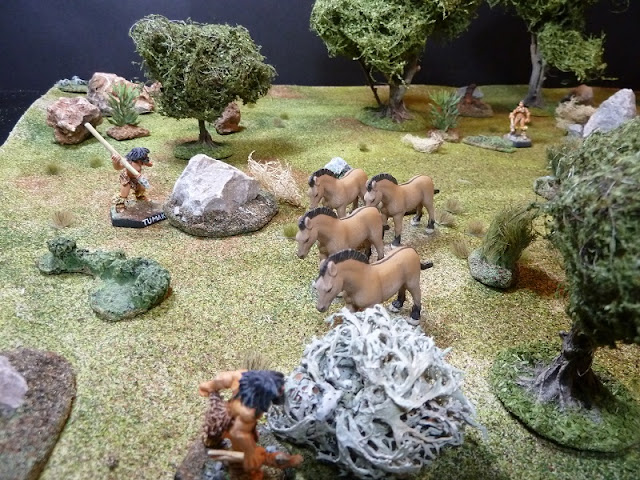 Yani realizes this will drive the horses away from the ambush and so she lopes around them and howls, we know how good she is at howling and the horses move away from her and back into the trap. 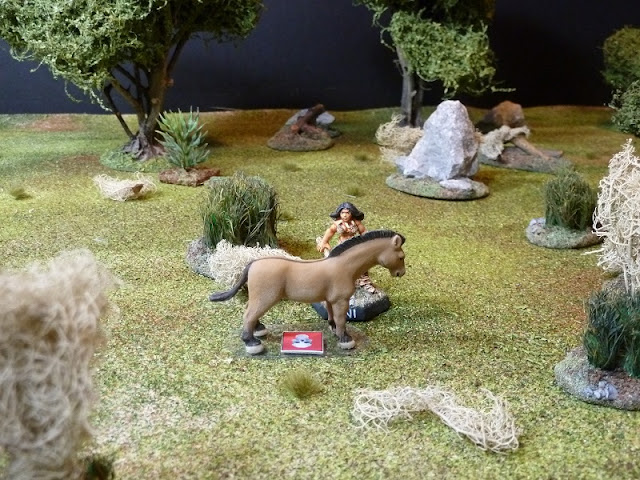 The hunters spring the trap, Tumak steps out from behind a bush and attacks a horse, missing his strike and it flees, straight towards Yani, she attacks and wounds it. 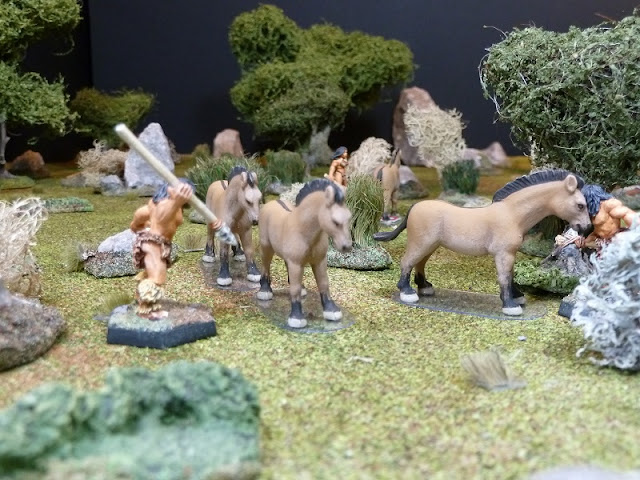 Akoba on the right attacks the horse nearest him and does no damage, the horse rears up and strikes out with it’s hooves but he is fast and ducks out of the way. 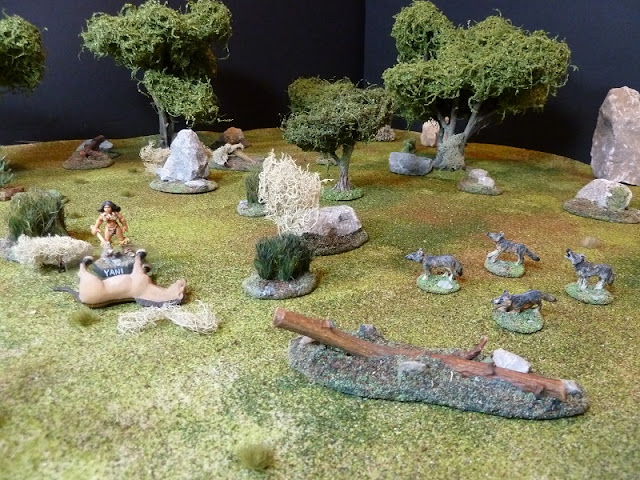 Yani gets a 2nd blow in, killing the horse, but the wolves attracted by blood are already moving her way.

The rest of the herd stampede and are lost to the clan. 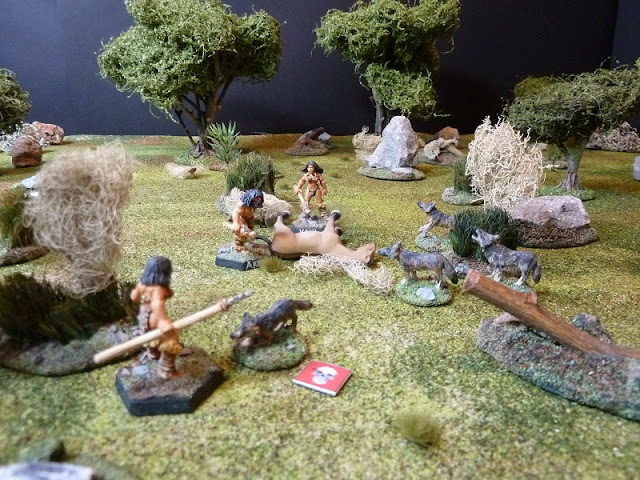 Akoba and Nuponda move forward to help Yani drive the wolves away from Yani’s horse kill, but the wolves are hungry and made bold because of it, one attacks Nuponda.

She drives it off as Tumak runs up to help the rest of the clan.

This was decision time, do we fight for our kill or back off and avoid confrontation, hell yes we are not going to let these mangy wolves have our meat. They might have sharp teeth but we have sharp spears with very pointy ends. (Notice the difference between killing wolves and baby mammoths) 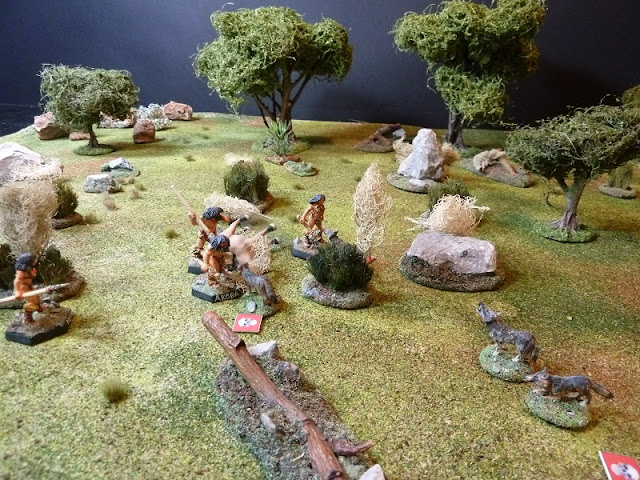 Two of the wolves are attacking Akoba and Yani the other two have been driven off, but still look dangerous. 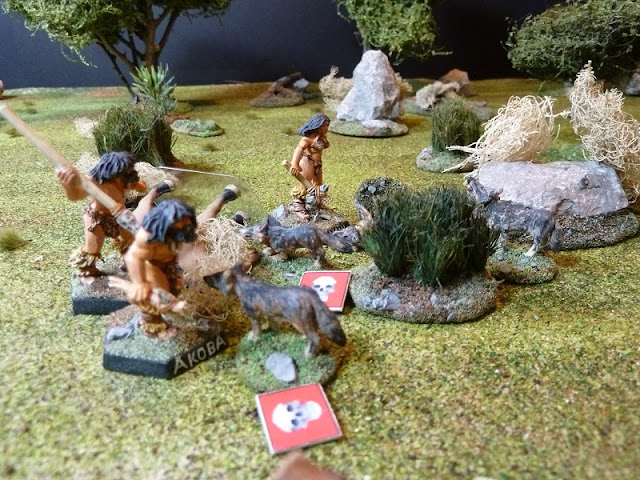 In the distance Yani has killed her wolf and two of the others are wounded. One is just howling but no one takes any notice. Akoba is bitten by a wolf but continues fighting. 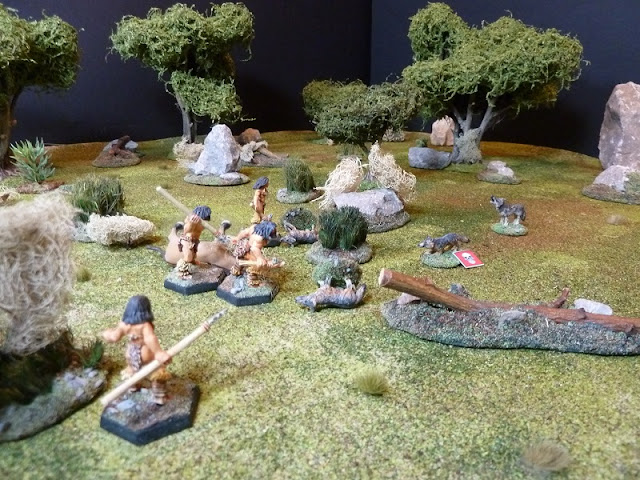 He finally kills it just as the wounded one returns to attack. 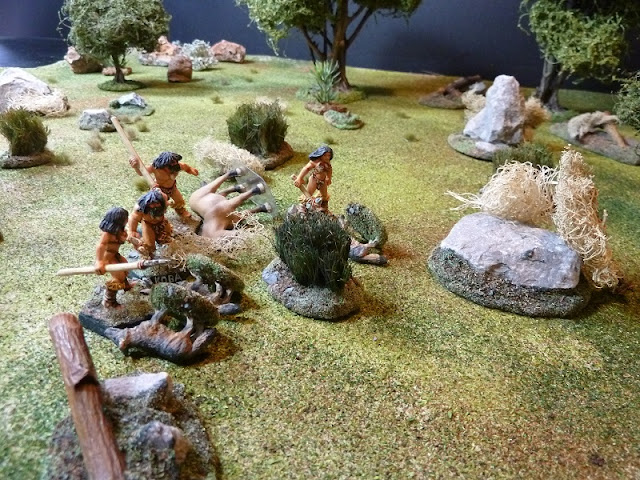 but it is finally killed and the remaining member of the pack slinks off.

The Horse hunt didn’t go so well but the meat from the wolves makes up for it and so another successful hunt for the Rock Ugly Clan.

Akoba was wounded but recovers for the next hunt without any lasting damage.

Yani did well and she becomes a Shaman! Able to commune and influence animals.

That night she had a vision, normally it would be a dream but she's a Shaman now so it's a vision. In the vision she sees smaller wolves helping the clan in their hunts.

Knowing the Clan's aversion to wolves, unless roasting over an open fire, she realises she is going to have to explain this idea slowly and maybe not tell them the whole truth or they will think her mad and leave her behind on the ice that is advancing from the north.
As the clan will not embrace her idea of inviting wolves into their dwellings so she talks about a new and unknown animal - dogs.

What are dogs they ask and when finally pushed for an explanation she describes them as wolves that don't eat you, the clan don't find this description very reassuring!!


Disclaimer - I stole this brilliant description of dogs from another blogger, but I can't remember who or I would point you to them - sorry :(


Well if you are still here – thanks for reading and let me know if you passed this way.
Cheers