For the past few weeks strange goings on, have been - 'going on' in Little Piddling in the Marsh.

First a sheep was found savaged, throat torn out, lots of blood spilt but the carcase was mainly intact. This was put down to wild dogs, foxes or even as one or two of the older folk muttered - wolves.

They knew it was common knowledge that wolves had been eradicated 150 years ago, but in the dark of the night, with the full moon shining, what else could have made that chilling howling but wolves, big ones at that.

Then a few nights later 4 of the village guard dogs disappeared without a trace. Great big beasts they were, steady and reliable dogs. Just disappeared into the night! People were starting to get nervous, no one left their homes after dark.

When farmer Prendergast’s bull was found dead, also with his throat ripped out but this time the carcase was partly eaten things were getting really scary. This was not the work of foxes or dogs.

Word was sent to the big house.

Finally when Mary Scroggins didn’t return home after visiting her friend in the next village, Much Piddling in the Marsh in the demesne of Mad Lord Snapcase, then Sir Marmaduke Langdale the local landowner with three of his friends and comrades in arms decided they would have to intervene.

This is a game I posted on LAF about a year ago - so sorry if you may have already read it, but I have been inspired by Greg to dig out the Gothic Horror figures and continue the story of Mary Scroggins, to do that you need to be aware of the strange doins that had been done before, this is part of the story so far. 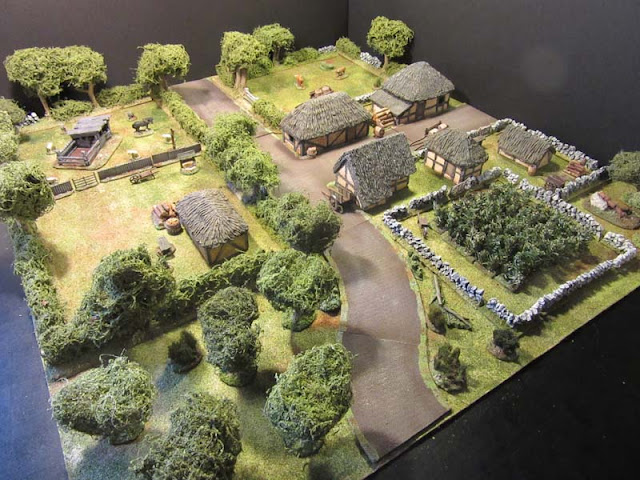 Little Piddling in the Marsh on a moonlit but overcast night. The year is 1655, shortly after the bloody Civil War, what evil still lurks there out in the dark of the night!!! 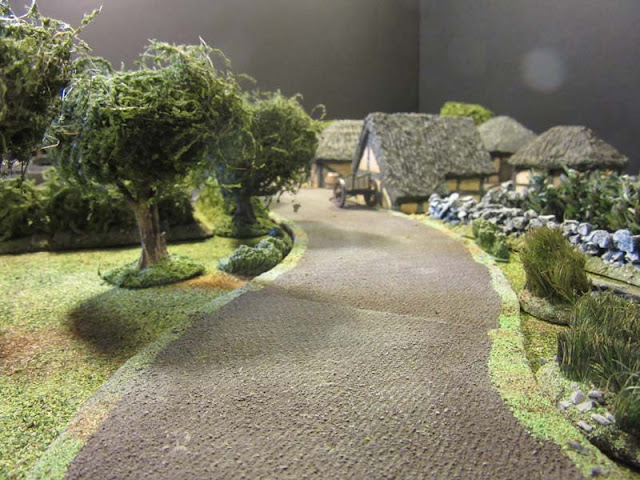 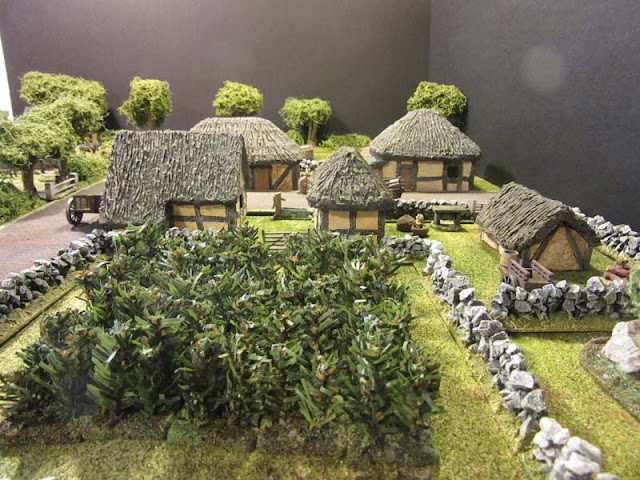 Views of the village from the south. The inhabitants sleeping fitfully hoping that daylight will arrive quickly - and they will live to see it. 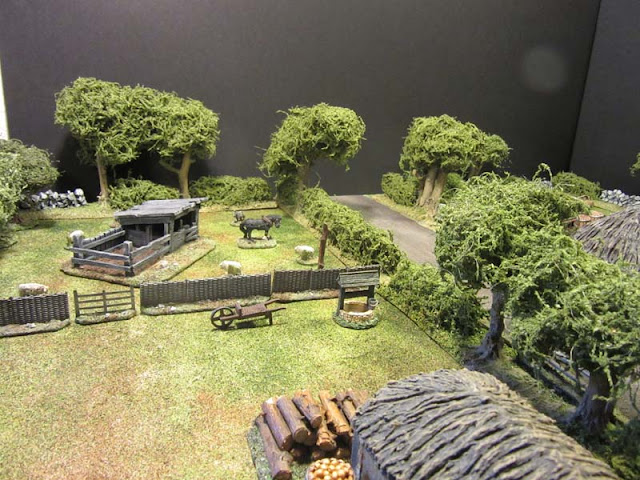 Most of the farm animals are penned in the fields to the north of the village.

Sir Marmaduke Langdale (ML), Jeremiah Pile (JP) and Baxter the dog are hiding in the hut partially in view closest to us. Simon Dark (SD) and Jonathan Hawke (JH) who drew the short straw are hiding in the pig pen in the field. It is late and they are all getting sleepy, if they fail their activation 3 times in a row they will fall asleep. 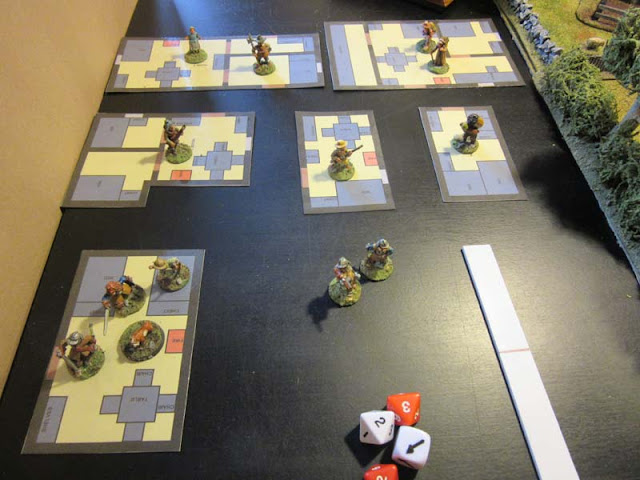 These houses don’t have lift off roofs so I use a 130% ground plan of the houses to place the figures. Sir Marmaduke is in the hut lower left.

This is as usual a solo game and I am playing the humans, so to maintain my surprise and suspense I'm using a number of counters to represent the monsters, for each counter when revealed I turn over a playing card each card has an allocated monster. There are a greater number of counters and cards than monsters, so that when a card is turned over and it could denote a blind card or a monster and also which monster. Hope that makes sense. Probably not.

Usually I would be hunting the monsters but this time I have laid an ambush for them and the bait is the farm animals. If anyone has any other ideas on how to create an attacking enemy and maintain surprise shout out with your ideas. 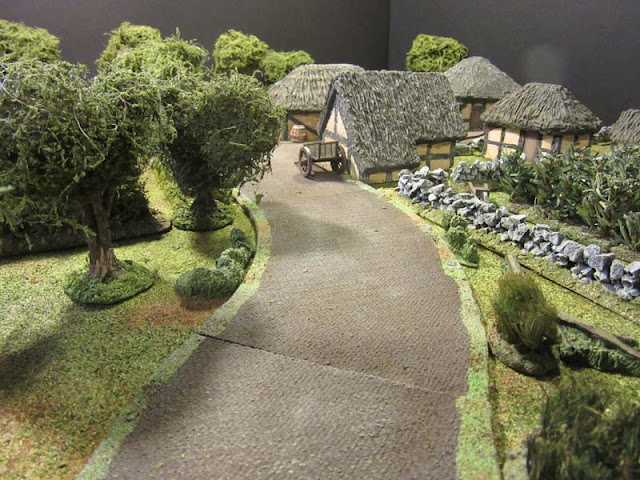 The monsters entered the board from here, 8 counters move left through the woods and 2 to the right towards the village. Their objective was to slaughter a goat and escape undetected off the board. The humans objective was to discover who was creating mayhem and stop them. 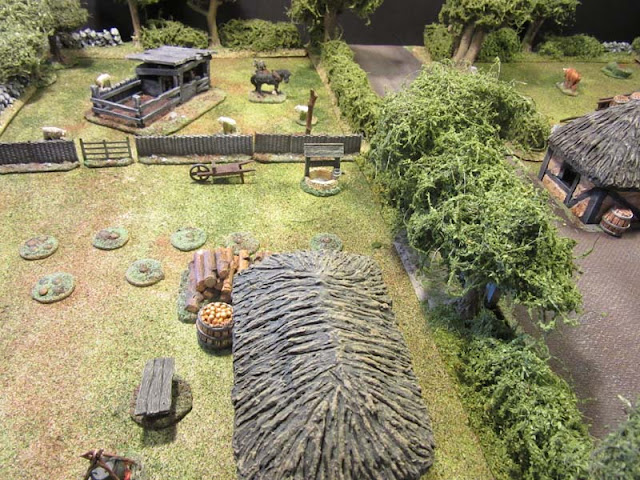 The wind is blowing right to left, the monsters counters have been moving forward for 4 turns, they can smell the humans but are fixated on the animals up ahead.

Sir Marmaduke has failed his activation for the 1st 3 moves and is fast asleep in the hut as they go past. Baxter the dog is also asleep and because of the wind direction does not smell the monsters and wake.

In the pig pen JH and SD have failed their activation twice and are almost asleep as well, must have been the wine they all drank earlier.

Not looking so good for the Sir Marmaduke and his companions. 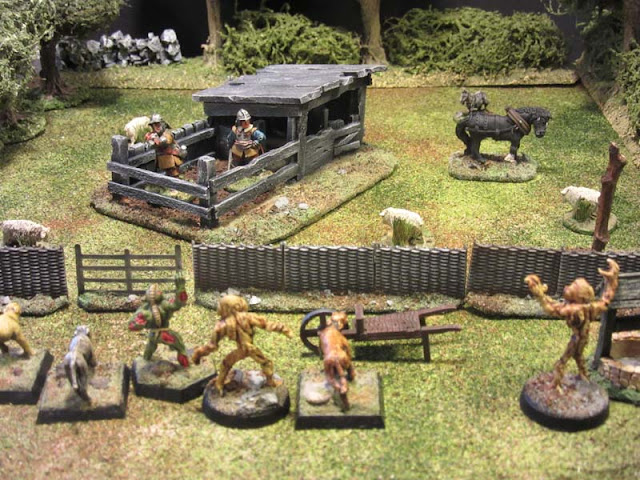 The start of turn 5 and the monsters move forward to within 6”, of the pen, in the dark that is finally insight. JH passed his 3rd activation and did not fall asleep so sees them to be revealed as 2 hairless werewolves (quite rare I believe) a green ghoul and 3 of the village dogs, red eyed and slavering.

Food - thinks the animals and attack. 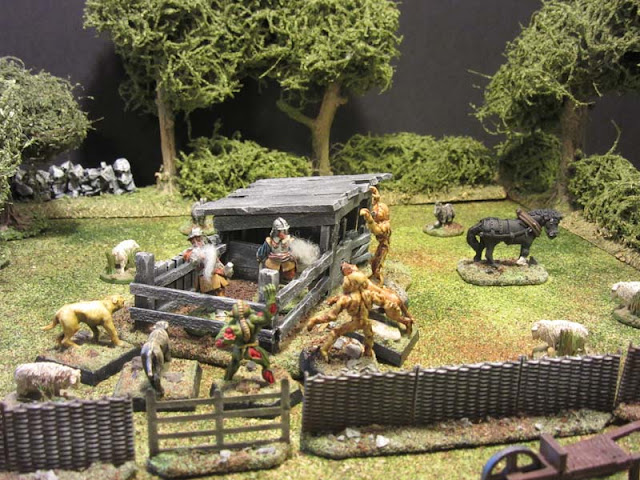 Shit – thinks the Cavaliers and fire.

JH’s shot goes wide but SD hits the Ghoul, good start I thinks but it shrugs off any damage and keeps coming. Humm not so good.

Savage fighting ensues but even though they are so outnumbered the good guys stay on their feet and even inflict some damage on one of the dogs.

The shots wake everyone.

Hopefully you noticed there were 8 counters moving forward on the left but they resolved as only 6 monsters. 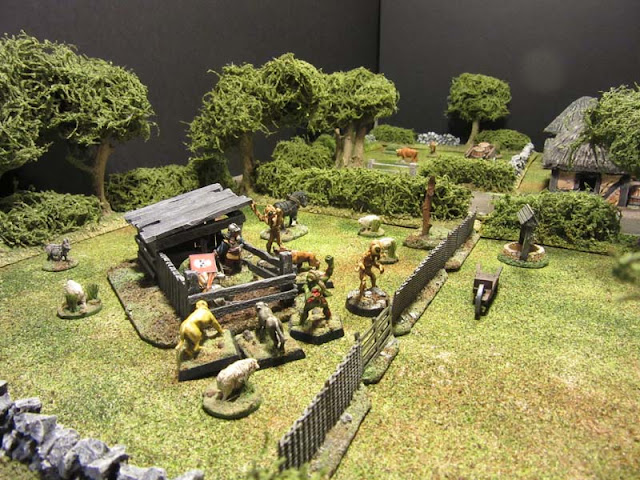 Just out of camera Baxter the dog erupts from the hut barking a challenge, which is taken up by the howl of a werewolf as it turns to face him.

SD goes down under the teeth of the dogs and claws of the ghoul but JH remains standing inflicting some minor damage on the other werewolf. It is now odds of 5 to 1, it’s a good job he said prayers before setting out today. 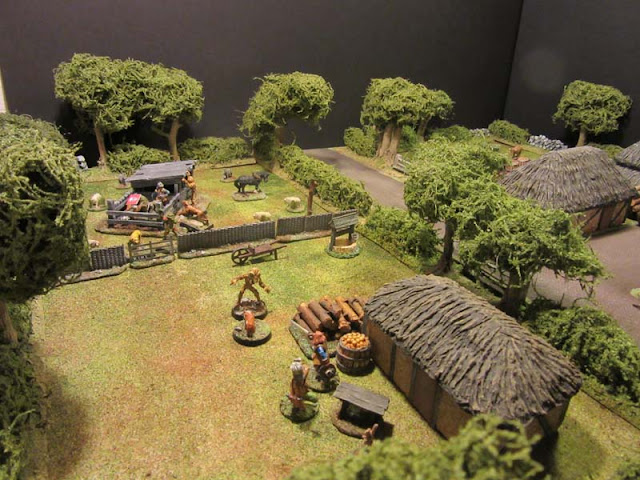 The werewolf charges at Baxter. Sir Marmaduke and Jeremiah emerge from the hut in time to fire at the Werewolf as it charges, they both hit and cause enough damage ordinarily to kill it, but it passes the KO test and carries on (Should have brought the silver bullets). Baxter only has to bite it once and it’s curtains for the werewolf. Not that easy as the Werewolf is 2m high and Baxter is only .4m. Werewolf wins in the melee but fails to inflict any damage.

The Ghoul and one of the dogs have left the fight against JH and are going to help against Baxter and co. The remaining werewolf and dog continue the fight and inflict some damage on JH. This is a real ding dong battle, all three of them have now taken damage. 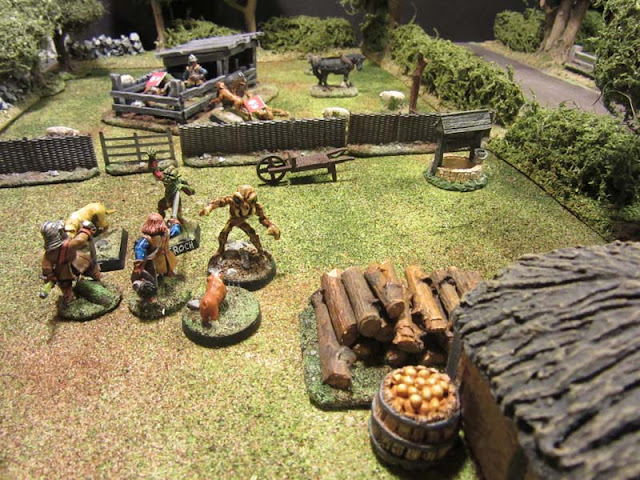 The Ghoul and ravening dog rush to the fight, howling, not to be thought slackers ML and JP draw their swords shouting their battle cry, For King and Country (guess which side they were on in the recent war) and attack the abominations. The Ghoul is injured but otherwise the fighting is inconclusive. Not so in the background where you can just see (if you squint) the werewolf has fallen to the keen sword of JH but he is still fighting two of the dogs. 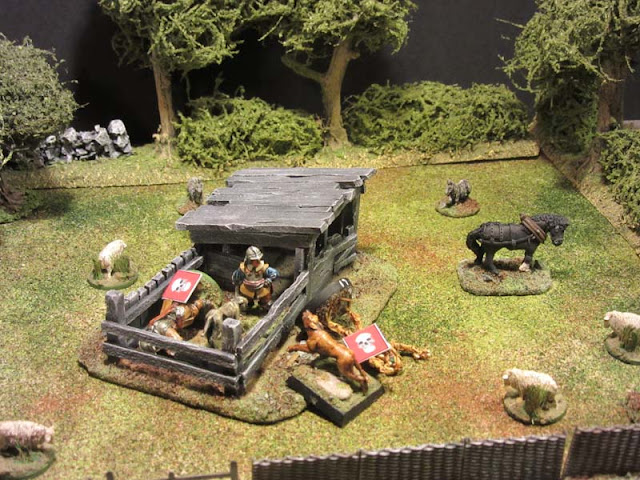 A better shot of that fight. 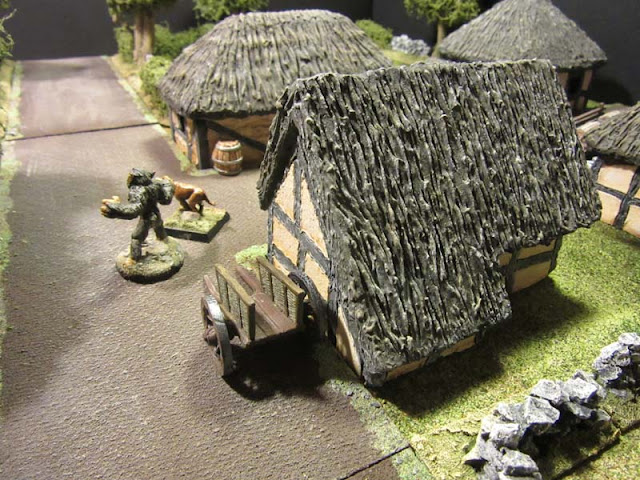 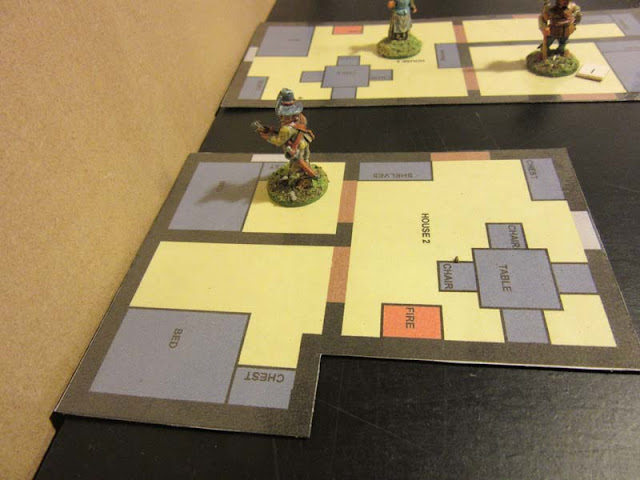 Richard Howe is looking out of the window and sees the dog, but not the wolf and shoots, hits and causes some damage but not enough to bring the dog down. 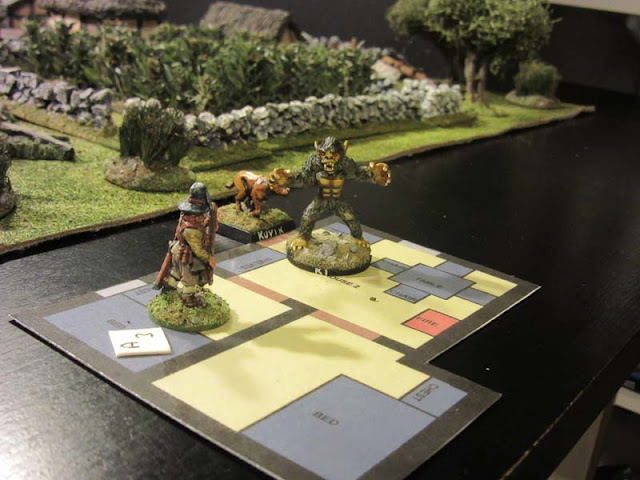 Whoops, ohh bugger, Richard sees the Werewolf as it passes the window, he is trying to reload his matchlock musket but is shaking so hard (bad Resolve roll) as the outer door bursts in. Just one door between him and destiny, and he just knows that he is not going to get that gun loaded in time. It looks like he is going to meet his destiny. Oh bugger.

Meanwhile Baxter has finally bitten the Werewolf in the leg and it is down and out. Baxter moves to help his master Sir Marmaduke. 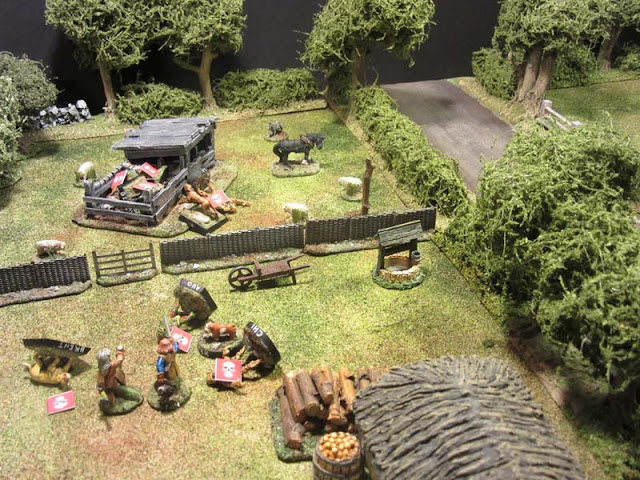 The fights have finally reached a conclusion, total victory for Marmaduke, Baxter and Jeremiah. Ghoul dog and werewolf lie dead on the ground but disaster for Jonathan Hawke, he has killed one of the dogs but the other one has torn his throat out and he is down bleeding to death.

The dog looks around, all is lost and he runs away. 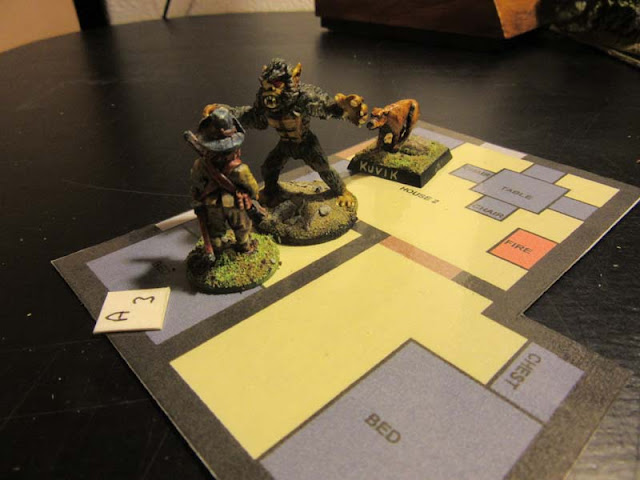 The final footnote, Ki the hairy Werewolf breaks down the bedroom door and devours poor Richard, before leaving with his hound at heel. 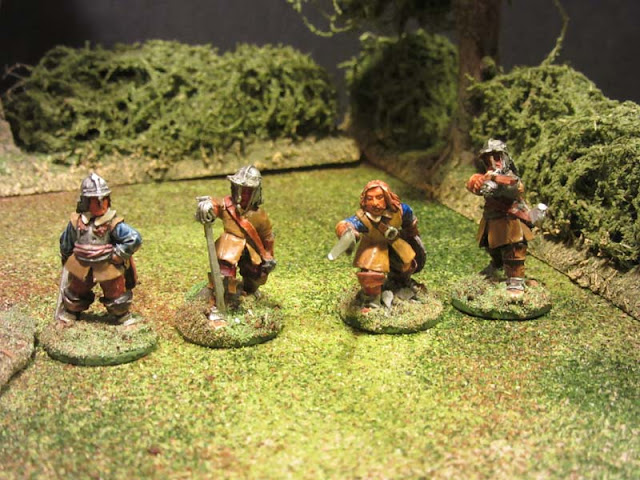 Our heroes in happier times - from left to right Jonathan Hawke RIP. Simon Dark RIP. Sir Marmaduke Langdale. Jeremiah Pile. Baxter the dog would not stand still for his photograph to be taken, he must be off fetching some ball or bone (who's bone?).

This was my first full game of Chaos in Carpathia, a variation from my normal rule set, the fights seemed to last an age, and I amended the rules a bit, especially activation, as this was a solo game my opponent agreed, sometimes reluctantly, with every change.
For me the jury is out on these rules, the mythos is good but I'm not so sure about the combat. They are sufficiently similar to the ones I usually use that I am thinking of making some conversions to them, or to my existing ones to make them compatible.

If you are still with me – thanks for reading so far and if you did pass this way I'm always pleased to hear from you.

I'm off to Warwick for a couple of days, to look at the castle and will catch up on my return.
Cheers
Posted by Vagabond at 07:36