CinC - The Hunt for Mary Scroggins

"Hell’s Teeth – Jesus, Mary and the Holy Ghost – By the Love of God – where is that damn woman". It all went quiet. When Sir Marmaduke Langdale lost his temper everyone knew about it, but that is not why it had gone quiet.

"Oh no" he muttered underneath his breath. "Sorry Sisters it’s been a long day". This was addressed to the 3 nuns who had joined the column that should have set out early this morning to search for Mary Scroggins.

Things had gone badly from the start, the cart horse threw a shoe and had to be taken to the Blacksmith, who could not be found, they searched all over the small village before finding him drunk in Ruth Appleton’s bed.

Then there was the delay sobering him up, getting the forge going, bandaging his hand when he smashed it with the hammer. It went on, the Nuns went missing in the late afternoon ministering to the poor – for heaven sake, everyone was poor.

The final straw was when Maude Porter heaved her pack on her back and the strap broke. Maude was the most essential person in the column, she was carrying the brandy, so they had to wait until she could repair the strap.

By now it was early evening. Everyone else was looking forward to a few beers and then to bed, setting off early the next morning, however Sir Marmaduke was not a man to be deflected from a course of action once he had decided on it. There were a few Parliamentarians from the war that would have agreed with that. Only a few, because the rest were dead.

“We can set off now and make up for the lost day, it’s only 8 miles to Greater Piddling in the Marsh and we can search the road side as we go and see if she is still with her friend when we arrive”. “Not to worry” said Sir M “it’s a full moon tonight we will be able to see fine - it wont be a problem”.

This follows on from my previous post when Mary Scroggins had gone missing, the local landowner Sir Marmaduke Langdale had been informed of strange goings on in Little Piddling in the Marsh, there ensued a desperate night of very strange goings on and now he had decided that there was nothing else to do but try and find Mary Scroggins, hence the expedition. This was also posted on LAF - sorry Brian, the next installment will be original.

The sooner it was over the sooner he could go back to Langdale Hall and enjoy the latest shipment of fine wine from France rather than this foul smelling ale the villagers drank. 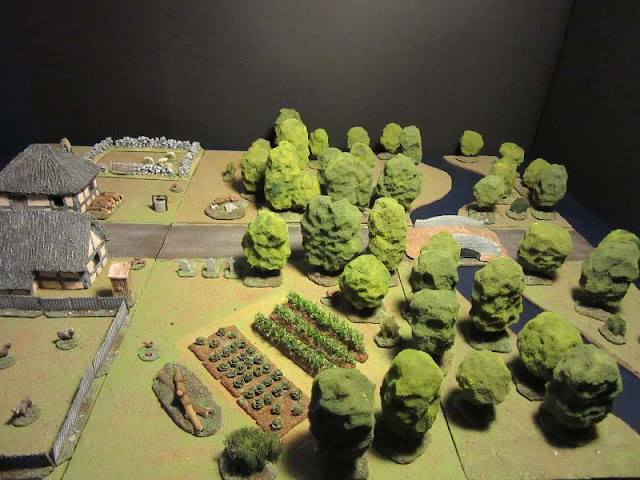 The outskirts of Little Piddling in the Marsh showing the road through the forest to Greater Piddling.

Yes the trees are bits of sponge, stuck on dowels, with a bit of hardboard for a base. Cost nothing and I have 100 off them. I took these to a local club and some young sprog said “I’ve never seen their like before”, he was brought up on a diet of G.W, where if each tree don’t cost £10 it can’t be a real tree. His mate said “Yes they are very old school” I don’t think he was being too complimentary. The tiles are 1’ squares of hardboard off an old door.

This is intended to be a road movie, so as the group move left to right, once they have moved from the 3 tiles on the left of the board, they will be cleared and moved to the right of the board and re-decorated with terrain and so on. Overcoming the limitations of only having a 3x4 table, this is the 2nd time I have tried this device and both games didn’t get to the 1st change over, ho hum. 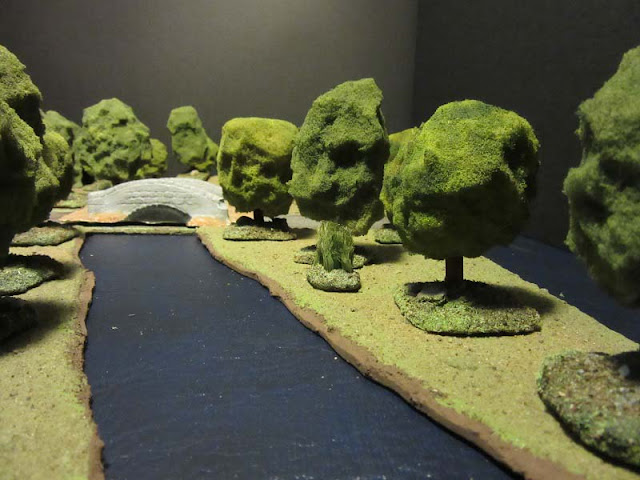 The river on the edge of the forest and the only way over is the bridge.

This is a plaster of paris casting from a Bellona vacuum formed bridge and has served for many years, it could do with repainting, but as I threw away my river sections years ago it doesn't get much use. 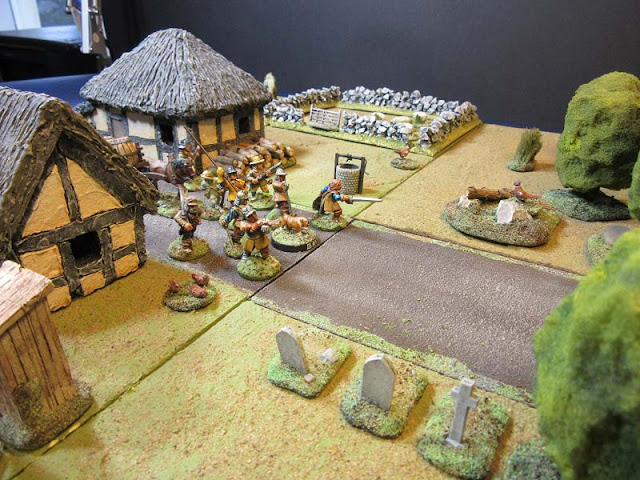 The head of the column leaving Little Piddling with Sir Marmaduke leading with his faithful dog Baxter by his side. 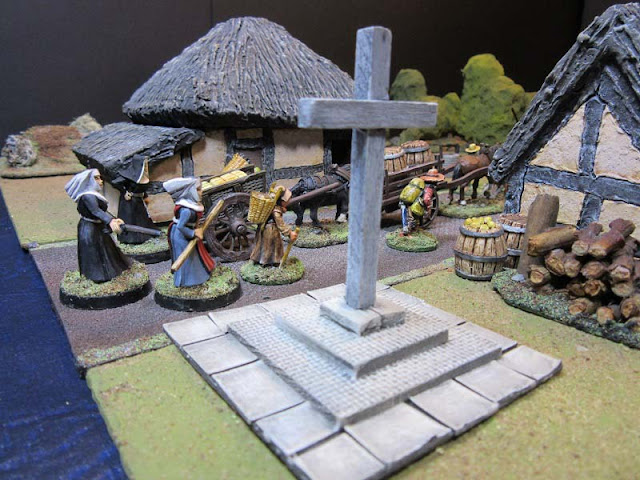 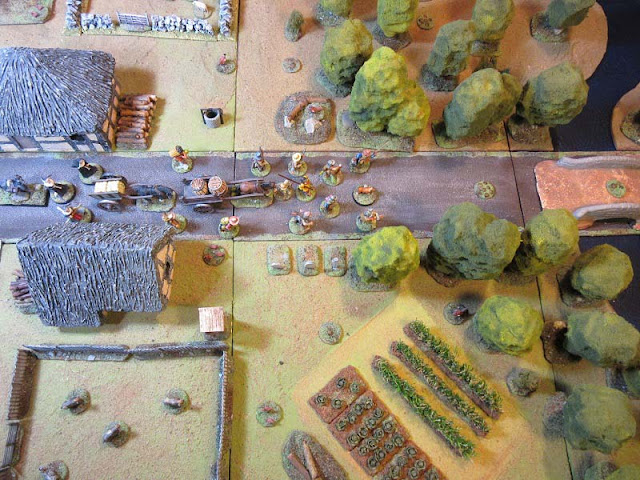 1st Turn and the column moves out, the encounter markers were then placed randomly, 14 of them, they move in a random direction and distance each time they activate. They can move off the table, when one moves into line of sight it is resolved by turning over a playing card and each card represents 1 of the 14 encounters which can be just the wind blowing in the trees (nothing) to any manor of things even the missing Mary Scroggins.

It’s starting to get dark and even with the moonlight, line of sight is only 12”. 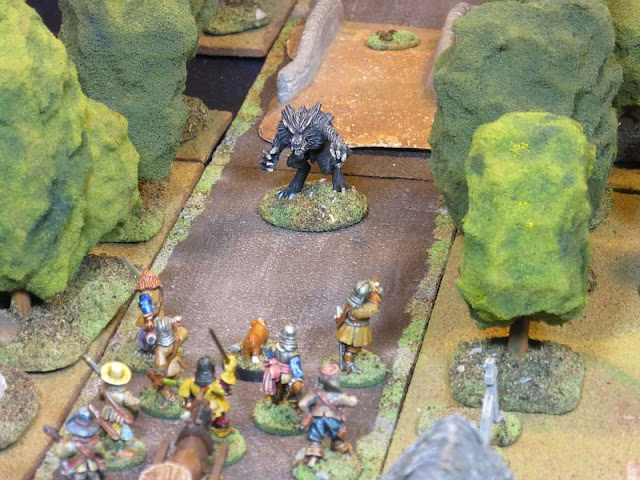 How does it go – In all the bridges in all the world and you walk over my bridge. The Werewolf Lord (Big W), the most powerful of the likely encounters is the 1st one drawn. This may explain why Mary Scroggins is missing thinks Sir M. 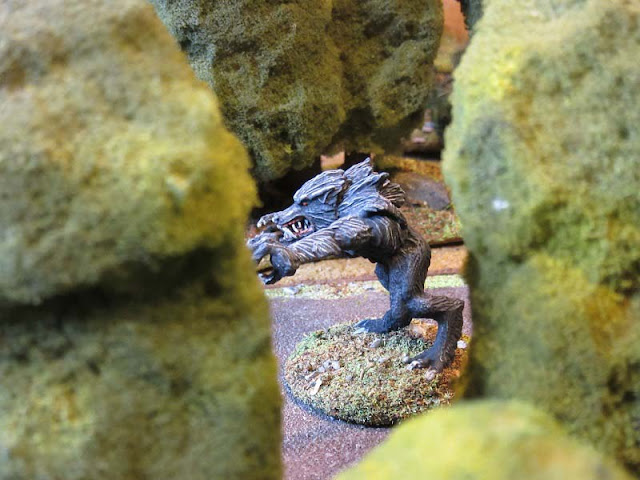 Just a gratuitous picture because I really liked it. 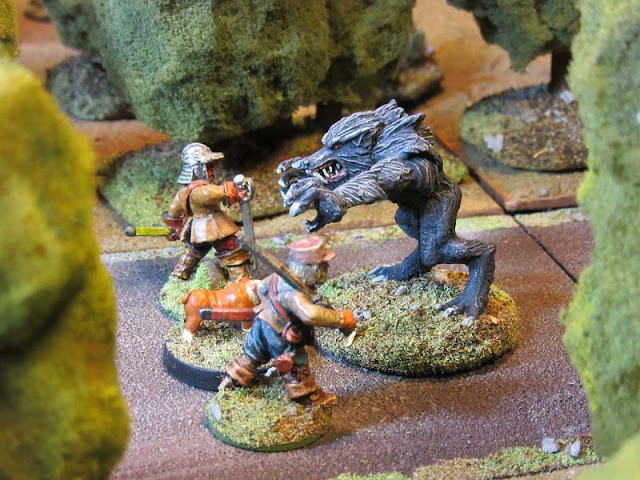 The huge Werewolf sees the hated humans and failed to activate, stood there glaring malevolently and looking scary. Baxter the Dog, Jeramiah Pile and Samuel Smith, without hesitation charged forward and attacked the beast, no brains and too much testosterone. – Do dogs have testosterone? The wolf wins the fight against all three of them but fails to inflict any damage. 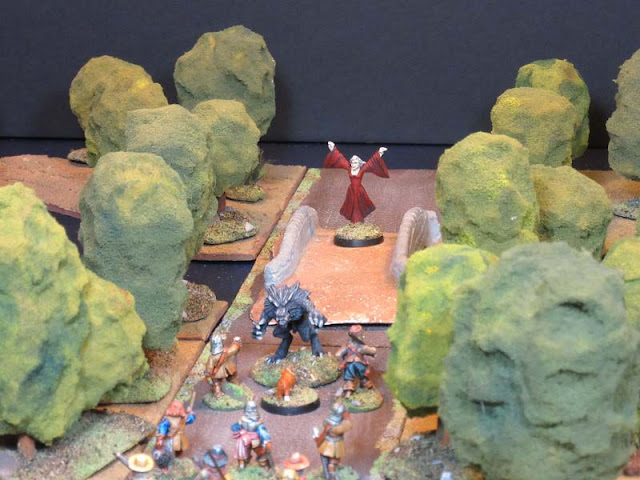 As the three musketeers move forward to attack the Werewolf they come within range of the encounter marker on the bridge – the Red Ghost with a terrifying aura of 10”, they are 11” away and so not affected.

The fight goes on, Baxter bites the wolf but his teeth are not sharp enough and he does no damage. J.P. and Smith are both hit again but take no damage.

This fight goes on and on. I may be misunderstanding the rules but it seems hitting is not too difficult but causing damage is harder and fights last quite a long time, this may be the intention, as vitality is lost bit by bit, but I'm not sure it works for me. 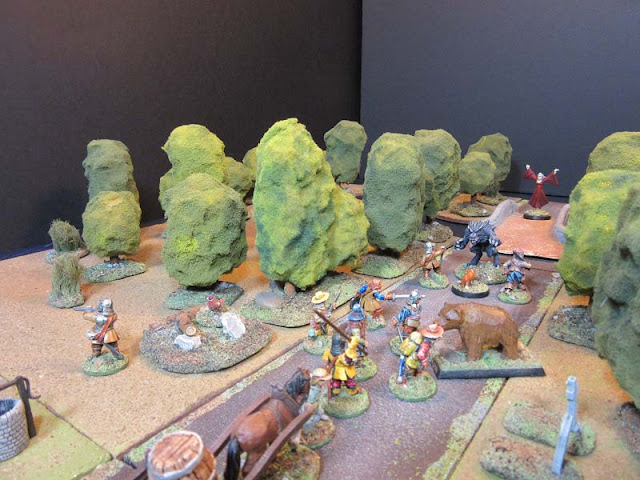 Moving randomly Brunn the Bear appears, sees the hated humans (does everything hate us) and charges. Simon Darkwood doesn’t like bears and runs away, but the others stand their ground and fire at Brunn, a musket ball reduces his vitality by 1 but a lucky shot from a pistol -4 vitality kills the bear. The fight with the Werewolf continues with some damage inflicted. 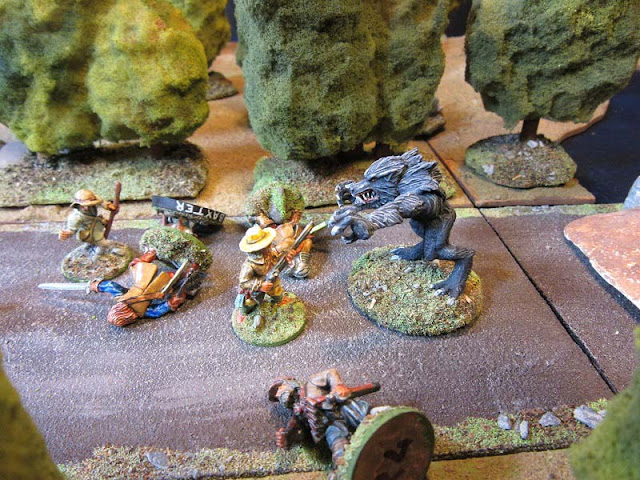 The fight had been going on for 6 turns before the 1st man went down, next turn Baxter goes down, Sir M steps up and immediately goes down, Jeramiah Pile goes down, it’s turned into a blood bath.

This is the situation on turn 10, Jasper is fighting Big W on his own, no one else passed their resolve tests to step in to the fight, although Daniel the Carter has moved forward when most of the fighting men have moved back. 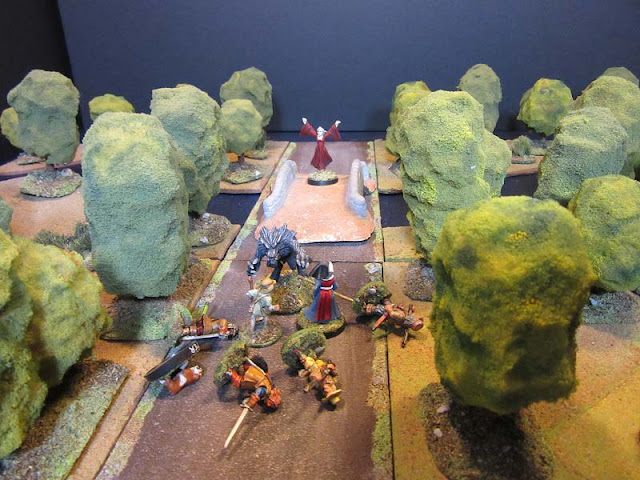 The next turn is a little surreal. Daniel the Carter with a stick and a sick look on his face together with Sister ? from the Order of the Virgin Mary, with a staff (big stick) both enter the fray, just as the last fighting man Jasper goes to meet his maker. 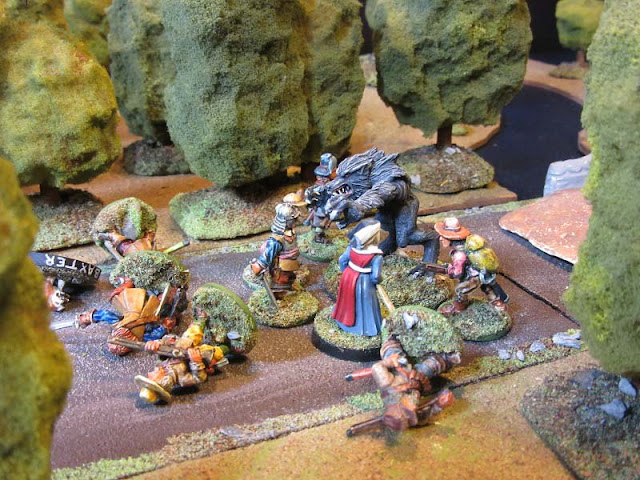 Sister ? is laying about her - admonishing Big W as the spawn of the Devil to go back to the foul pit he crept from. Obviously embarrassed by the fact that a Nun and a Farm Labourer were doing all the fighting, and doing it better than the fighting men, Johnathan Hawke led 2 others into the fray.

Odds of 5 to 1 tell in the end and the Werewolf finally succumbs to numbers and goes back to meet his maker. Westwind I believe. 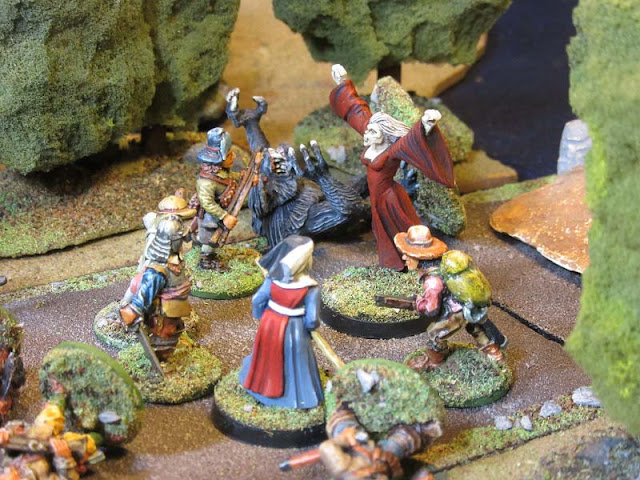 The relief is short lived as immediately the Red Ghost swoops into the fray. 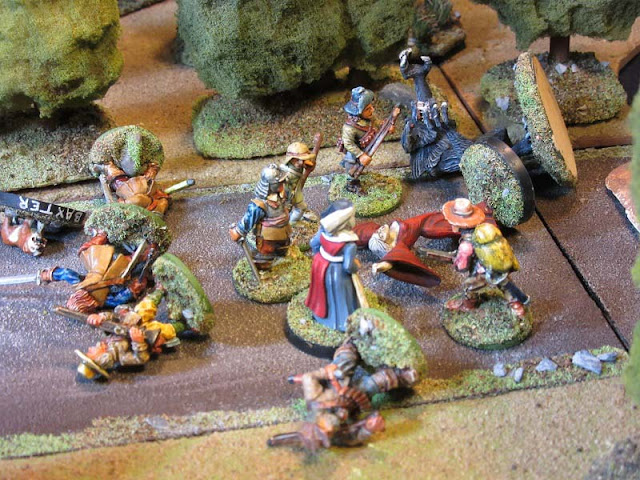 Which is a big mistake because although everyone except the guy in the Monmouth hat were terrified by her terrifying aura, no one runs and she faces 5 determined enemies and is killed, or what ever happens to ghosts when they die. Laid to rest probably.

Well with 5 of the party down, 2 running for the hills and 4 terrified, the general consensus is to leave Mary Scroggins to her fate and go back and drink some more of the foul smelling local ale and have a good nights rest.


Conclusion of the Story


Sir Marmaduke Langdale made a full recovery, apart from the limp, but Baxter his dog lost both his canine teeth when he took hold of the Werewolf and wouldn’t let go, he now has his meat chopped finely.

However he has been test fitted with some iron canines that might just do the job and if so will give him a +1 bite. This was a suggestion put forward by Eduardo when he read the original tale and a damn good one I think.

The Nuns helped minister to the wounded and poor in spirit, and may continue the journey to Greater Piddling at a latter date.

Daniel the Carter decided he had enough of adventure and retired to his farm in Soggy Bottom.

If you are still here – thanks for reading.
Posted by Vagabond at 06:45