The Adventures of Becky - The Good Samaritan

The story so far:-

Becky received a letter from her dead father in the The Red Jade Buddha and she received more information including her fathers journal relating to a mysterious Red Jade Buddha in and The Mean Streets of Penrith, she and her friends had bad dealings with a gang of bikers led by Boris a bald headed thug, who stole this information from them in The Midnight Callers and then they retrieved it from Boris at his hotel in Boris and the Swan in Inverness, they discovered there was more information in the last chapter The Lost Information where they met up with suave sophisticated Sam Fernando another crook and now we are on with the latest exciting but very short adventure in the UK before going foreign.

If you click on Becky or the Red Jade Buddha on the right it will show you all the previous stories.

The girls and Becky have now read the information that her father has left along with the stuff that they had liberated from Count Sparrk and so have a good idea of where to go next in the search for the Red Jade Buddha. They have decided that they should try and recover the idol, thinking that the trail to it might also throw some light on to what's happened to Becky’s father, how did he die and where.

Having made contact with the rest of her friends they are all going to meet up at Heathrow airport and set off on the first leg of their journey that will eventually lead to South East Asia. They will fly to Calcutta, drive down to the coast to a small sea port where they will board a commercial sea plane headed for Changoon, a melting pot for all the scum of SE Asia.
There they plan to meet with up with a pilot who operates a small private float-plane company and they also hope to recruit a guide for the rest of the trek into unchartered territory. This small float-plane and it’s mysterious pilot will fly them up river, flying over and bypassing the rapids and waterfalls on the Raffinika river into the heart of Cambodia where the trail really starts.
(Unless I can do a deal with Nickle and Dime Studio's and rent their river boat :) )

That is all in the future - hopefully, and meanwhile the girls have to get to the airport, there are evil forces at large who will try and stop them at all costs. 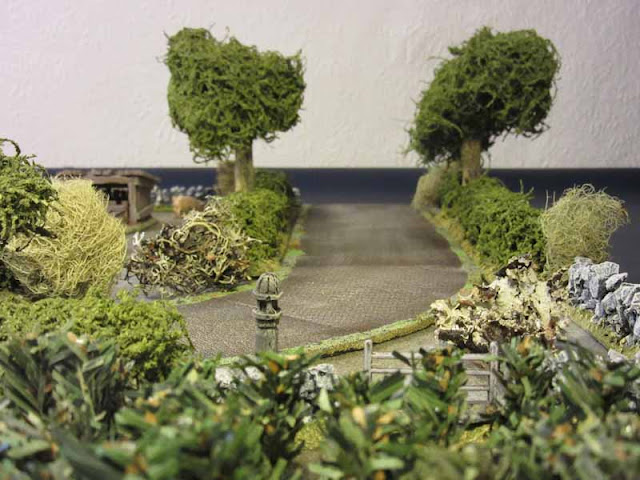 The road to Heathrow passes through some glorious countryside in the South of England, well bits of hardboard, lichen and old Christmas trees with a bit of horsehair thrown in. 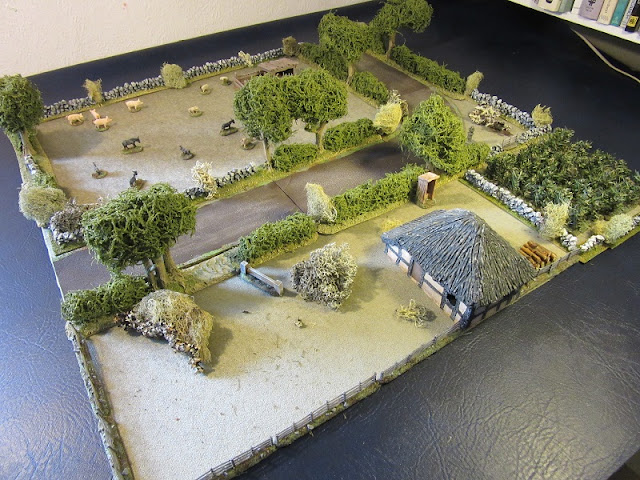 Overview of the board, the girls will be driving down from the north (top) and exiting of the west (left) side of the board. The bad guys will set up a road block. This is intended to be a simple break through scenario.

The bad boys appear to have some inside information which is why they are ready and waiting to lay the ambush. 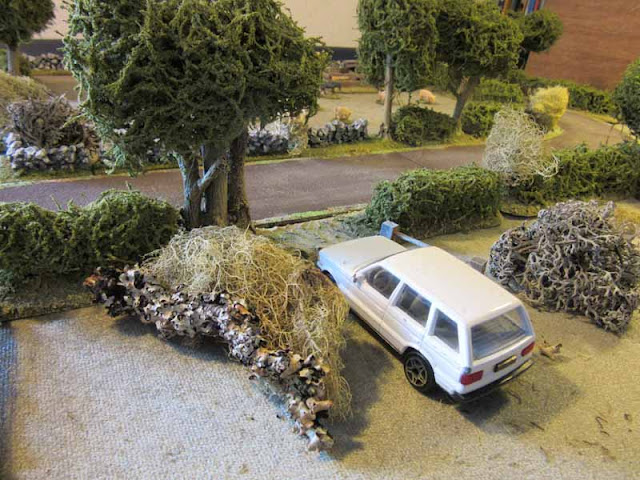 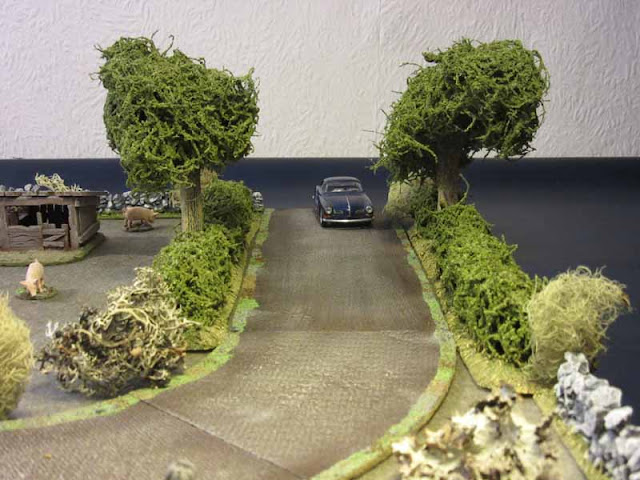 Becky has 1D6 of her friends including herself and threw 2. So just her and Susan Gunn, who was less than useful in Inverness having drunk too much whisky the night before, mind you if I remember, they all had too much whisky the night before.
They are driving down from Susan’s home in Gloucestershire to Heathrow to meet up with the rest of the girls before flying to India. 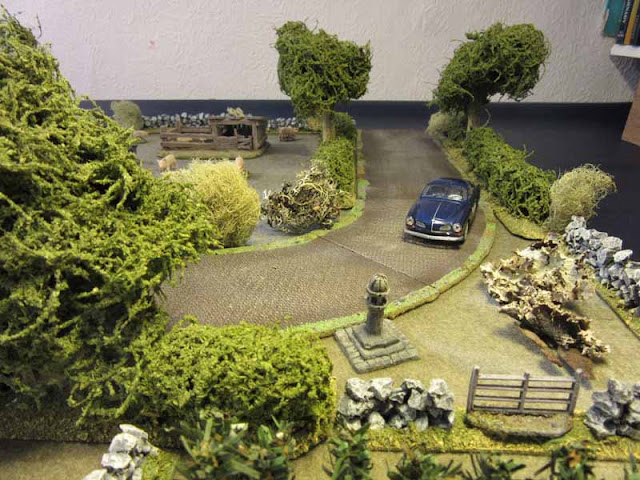 They are almost on the left so they must still be in England. So the Range Rover appears to have had an accident and Fat Willie is lying unconscious on the road. Could this be a trap? Is that Tank hiding behind the wall, of course it’s a trap.

The bad blokes in ambush, there are also 1d6 of them, each armed with improvised weapons, clubs, tyre irons etc. Their task is to stop the girls from getting to the airport, they will break bones to achieve this, but aim to maim and injure rather than kill. This is England you know - the land of cricket and knife crime.

Bad roll for the Bikers only 2 of them, I guess the others were delayed in hospital. It will make for an even and short game. 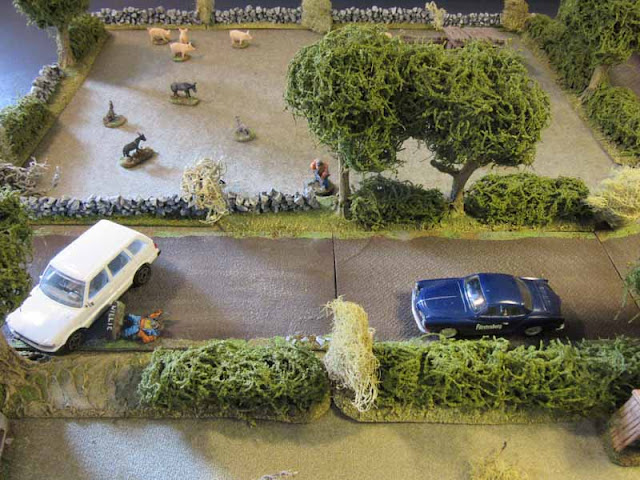 The girls round the corner and see the “accident”, fail their Brains test and believe it is an accident, how dumb can they get, they start to slow down. 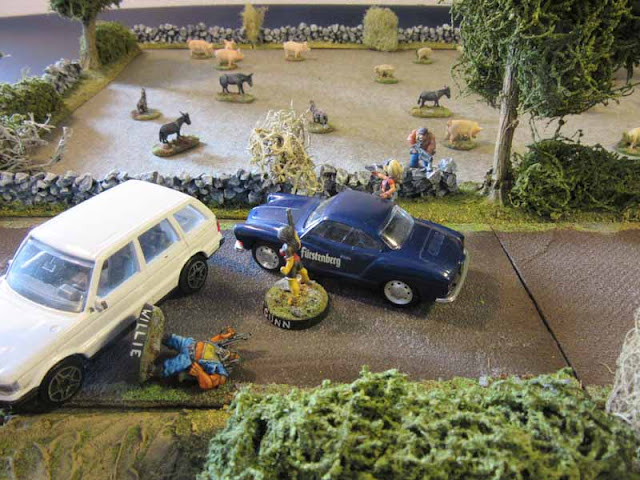 Isn’t that guy wearing biker duds, hummm. Maybe it’s a trap Susan mutters but Becky who was driving had decided that there is no way past the Range Rover and pulls to a halt.

It might be a real accident so they stop and get out to help. The Good Samaritan.

Tank rushes through the hedge straight at Becky, he's taking no chances with these deceptively demure girls this time and has armed himself with a sledge hammer shaft. 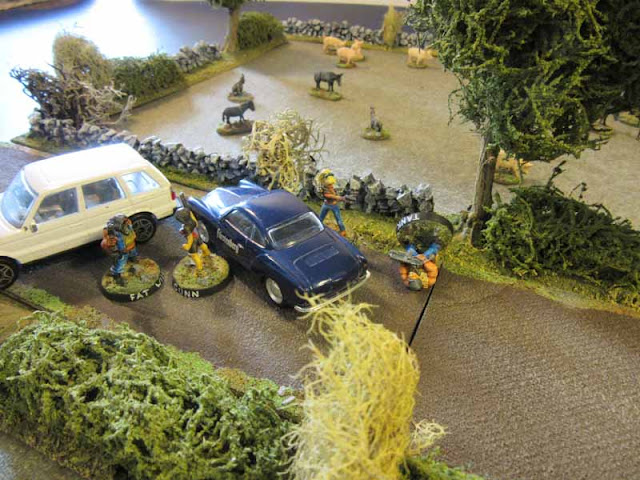 Fat Willie jumps to his feet, ha I was only bluffing he sneers at Susan.

Well I never would have guessed she sneers back. 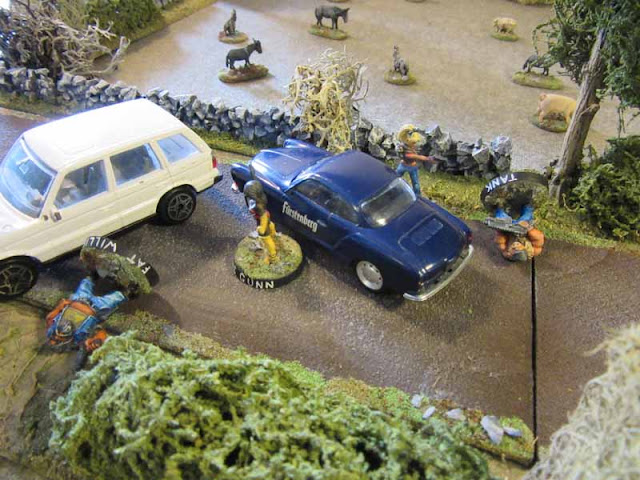 Fat Willie attacks Susan with a base ball bat. This gives him 5D6 and she has 3D6 to fight back with. He fails all 5 dice and she hits with 2 of the 3 dice, not his day. With his Constitution of 2 this is enough to put him to sleep and down he goes.

These bikers are proving no match for the girls in fisticuffs even when they are armed with clubs and such like, things might have to get serious. 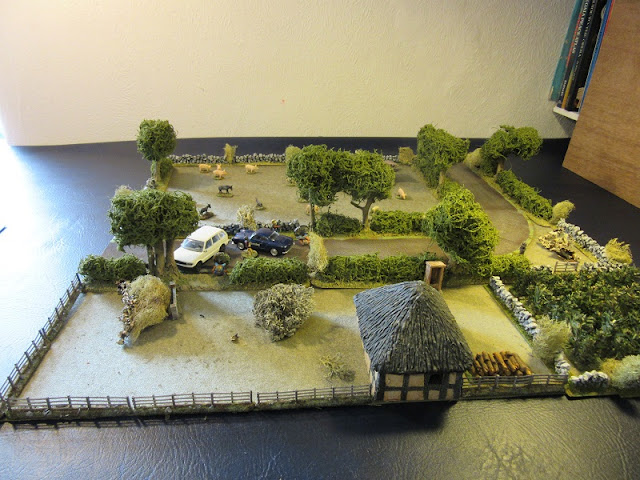 With the sun shining down Becky and Susan take the weapons, move the car and drive off with the ignition key leaving Willie and Tank without a ride. They head off to the airport at Heathrow to meet with the rest of the gang and then on to who knows what further adventures.

If you are still here - thanks for reading and let me know you passed this way in the comments.
Cheers
Posted by Vagabond at 14:38